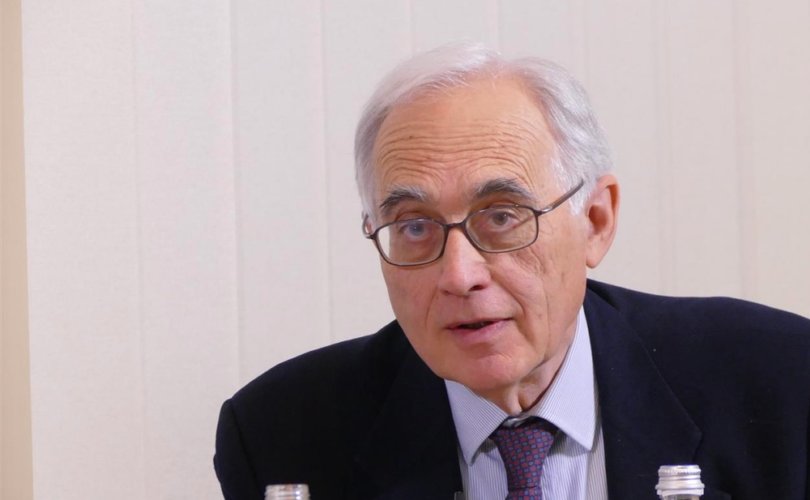 Editor's note: An international group of lay Catholics held a public demonstration in Rome yesterday just outside the Vatican, demanding that Pope Francis and the world’s bishops address homosexuality during the upcoming abuse summit as the major cause of the sexual abuse crisis in the Catholic Church. The following statement was given by Prof. Roberto de Mattei during a press conference at the event. Read all statements here.

February 20, 2019 (LifeSiteNews) – If the summit of the presidents of the Bishops’ Conferences of the world gathered by Pope Francis limits itself to addressing only the abuse of minors, as the title of the summit indicates, without addressing, for example, the question of homosexuality in the Church, it will be a meeting destined to fail, because it will not address the true causes of the problem.

It would be hypocrisy to limit the scandal to pedophilia, ignoring the plague of homosexuality, which is not only a vice contrary to human nature but also forms the basis for a structure of power within the Church. And it would be hypocritical to limit itself to only denouncing moral scandals, without addressing their doctrinal roots, which stem from the years of the Second Vatican Council and the post-conciliar period.

It seems instead that ecclesiastical authority is interested in crimes such as pedophilia or rape, not because they are a most grave violation against divine and natural law and thus constitute an offense against God, but only because they are an example of violence against our neighbor and thus are legally crimes in modern secular states.  But the modern secular states which condemn pedophilia promote homosexuality, and today the men of the Church are afraid of being called out as “homophobes”.

In recent days, this has been displayed in the media campaign to launch the new book of Frédéric Martel, Sodoma, which asserts that every churchman who condemns homosexuality is a homophobe and every homophobe is a repressed homosexual. Thus the true sin is said to be the hypocrisy of those who do not publicly declare themselves homosexual.

This book represents an attempt to exercise menacing media pressure on the bishops who are gathering in Rome in order to reduce them to silence. We are here today to break down this wall of silence. Silence may be broken with words, as we are doing in this press conference, but also by symbolic actions, such as we have done in our demonstration in Piazza San Silvestro. Speaking does not mean only murmuring words, and thus a public demonstration can express a message more strongly than verbal language.

St. Gregory the Great in his Pastoral Rule defines wicked pastors as “mute dogs, incapable of barking” (Isaiah 56:10). “ For a pastor, what is the fear of speaking the truth, if not turning his back on his enemy with his silence?” Our appeal is made to the Presidents of the Bishops’ Conferences gathered in Rome, and to the bishops of the world, asking that someone among them will have the courage to stand up and break the silence, as Archbishop Carlo Maria Viganò did.

If this does not happen, our testimony will remain as an admonition against those Pastors of the Church who, with their sepulchral silence, are in fact disowning Catholic faith and morals. But Our Lord Jesus Christ has told us that He will confess or deny before God whoever will have confessed or denied Him before men (Mt 11:32, Lk 9:26, 13:8-9).