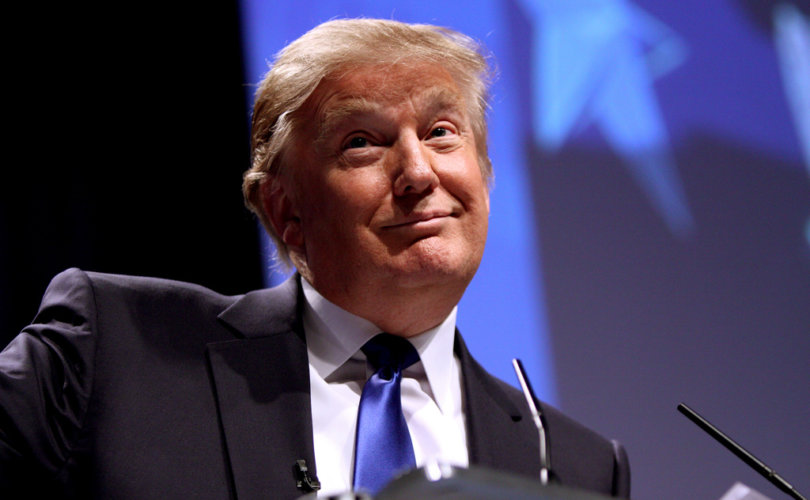 HOLLYWOOD, Florida, April 22, 2016 (LifeSiteNews) – The day after Donald Trump earned rebuke from pro-life leaders for saying he would liberalize the Republican platform on abortion ­– in remarks one conservative leader predicted was part of a pivot to the Left for the general election ­– Trump’s campaign has admitted he’s been “projecting an image” during the nomination battle.

“When he's out on the stage, when he's talking about the kinds of things he's talking about on the stump, he's projecting an image that's for that purpose,” Trump’s newly-hired top aide Paul Manafort told Republican National Committee members in a private meeting. A recording of the remarks was leaked to the Associated Press.

Trump, who publicly supported abortion until recently and said his pro-abortion sister would make a “phenomenal” Supreme Court justice, said earlier this week he would like to make the Republican party’s platform less pro-life including exceptions for rape, incest, and the life of the mother.

Trump also spoke out against North Carolina’s bathroom privacy law this week, asserting that “people go, they use the bathroom that they feel is appropriate,” and the state should have just “left it the way it is.”  In a Fox News appearance, he doubled down on his comments against the North Carolina law, which prevents men from using women’s bathrooms, but said the issue should be decided at the state and local level.

Veteran conservative leader Richard Viguerie, who has endorsed Ted Cruz, told LifeSiteNews Thursday that the abortion remarks were a “confirmation of those of us who opposed Trump.”

“I can't think of a major issue that he didn't hold a different position five or 10 years ago – whether it's on immigration, illegal immigration, the life issue, social and cultural issues, economic issues, taxes,” said Viguerie.

“He's going to attempt to hijack the Republican position on these issues and move them toward the liberal Democrat position,” Viguerie predicted.

As it becomes more likely that Trump will win the Republican nomination, the 2016 election is looking bleaker and bleaker for pro-lifers.

But retreating is not the answer.

There’s no denying that pro-lifers have made tremendous political gains for the unborn, particularly at the state level, over the past few years.

If Trump is the Republican nominee, it would be wise for pro-lifers to work with him to show him the truth about abortion and why it’s the greatest human rights injustice of our time.   Pro-lifers can’t just throw in the towel—we have to show that we, along with other social conservatives, are an integral part of conservatism.

And we should pray that Trump’s image doesn’t change back into the ultra-liberal, pro-abortion one he’s projected for the past two decades.