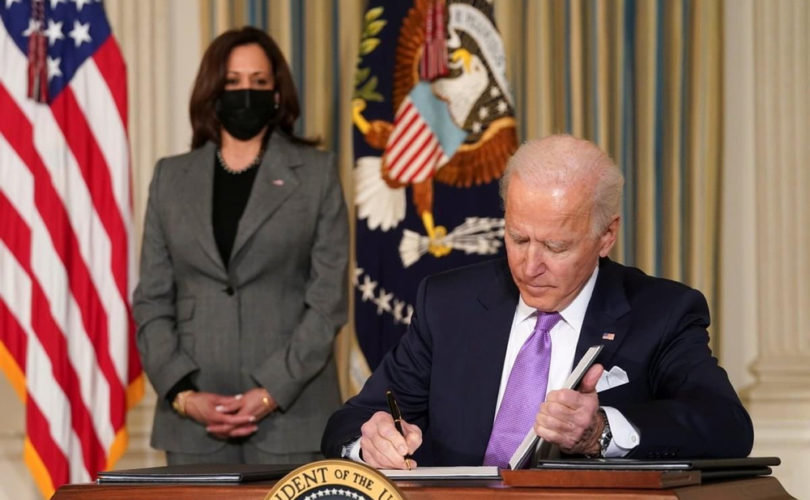 April 27, 2021 (Family Research Council) – Joe Biden hasn’t even been president for 100 days, and it already feels like an eternity. In just three months, the man absurdly dubbed a “moderate” has emerged from his campaign basement and dispelled that notion – to the delight of the party’s radicals. He has embraced the far-Left’s all-out war on every pillar of democracy.

Shell-shocked, Americans have watched this White House spend us into insolvency, inflame our divides, and lead a charge to radically makeover the Supreme Court, our states’ election laws, the U.S. Senate, immigration policy, religious freedom, and human biology. He’s exceeded expectations to be sure – just not in the way most voters had hoped.

It’s no wonder, in this flurry of leftist wish-granting, that most people in this country aren’t giving Biden high marks. In a new ABC/Washington Post poll, the 46th president's approval rating at 52 percent is the lowest of any modern president except Donald Trump and Gerald Ford. “For the 14 presidents from Truman to Biden, the 100-day average is 66 percent.”

Biden’s highest marks, ironically, come from COVID successes he can’t even claim credit for, having been in set in motion months earlier under Trump’s Operation Warp Speed. And yet still, the mainstream media – the informal arm of Biden’s PR team – is even trying to spin the public’s response, claiming that 52-percent approval “is the new 60.”

“Any time you’re over 50 in this polarized environment, that's really solid,” NBC’s Chuck Todd argued. “It’s sort of the new 60 percent of the way when you and I grew up in the 80s and 90s.” But unfortunately for him, there’s no way to gloss over other numbers – like Biden’s glaring underperformance on foreign affairs, the border, and race relations.

In results that are sure to be ignored by the press, Pew found that 54 percent of Americans say they disagree with the president on “most or all issues.” Only 44 percent agree. A plurality think he’s spending too much (48 percent), Quinnipiac points out, and on immigration, his numbers are at crisis levels – even as he insists the actual problem is not.

Of course, some of Biden's most devastating decisions in these early days have been rolling back – or completely annihilating – Donald Trump’s progress on key issues. FRC just released a new document called, “Tracking the Biden Administration” that catalogues all of the president’s devastating actions so far. Stacked side-by-side with the Trump Accomplishments, it’s a sobering night-and-day contrast.

Of the 62 executive actions Biden has taken so far, a record-setting number – 32 – were a direct attack on life, family, and religious freedom. Add that to his cabinet, stocked full of pro-abortion, anti-faith extremists, and this administration is on track to make Barack Obama’s administration look centrist!

Obviously, Biden’s promise to unify was just another convenient throwaway line. “After campaigning on [it],” Gary Abernathy wrote in the Washington Post, “Biden so far recognizes Republicans only as one would acknowledge shoulder lint.”

The same goes for more than half of the country, who this president has trampled in his payoffs to groups like Planned Parenthood. He’s overturned the hugely popular ban on overseas abortion funding, opened the doors to fetal tissue research, relaxed the restrictions on dangerous chemical abortion pills, agreed to let abortion groups take Title X “family planning” dollars again, and picked a team of anti-Hyde amendment, pro-abortion radicals to run his government.

On gender and sexuality, the president has almost done more in 100 days than Barack Obama tried in two terms. His orders are on track to abolish girls’ sports, fight any limits on transgender treatments, march transgenderism into the military, and eliminate single-sex services in homeless shelters, prisons, and other housing arrangements.

— Article continues below Petition —
PETITION: Support Archbishop Naumann's defense of LIFE as head of Bishops' Pro-Life Committee
Show Petition Text
25854 have signed the petition.
Let's get to 30000!
Thank you for signing this petition!
Add your signature:
Show Petition Text

As if that weren’t enough, he’s created a “White House Gender Policy Council,” promised to strip away conscience rights from medical personnel on transgender hormones and surgery, and moved forward with plans to end gender-specific bathrooms, locker rooms, and showers in the public schools. Meanwhile, his diplomatic corps have already warned the world that they'll be forcefully pushing the LGBT agenda in every way.

FRC’s Mary Szoch points out in a new op-ed for Newsweek that back in 1974, Joe Biden told the Washingtonian that on social issues, “I’m about as liberal as your grandmother.” That might have been true 47 years ago, but it’s certainly not true now. The more powerful Biden has gotten, the more untethered from morality he’s become. If anything, his views would shock most of our grandmothers!