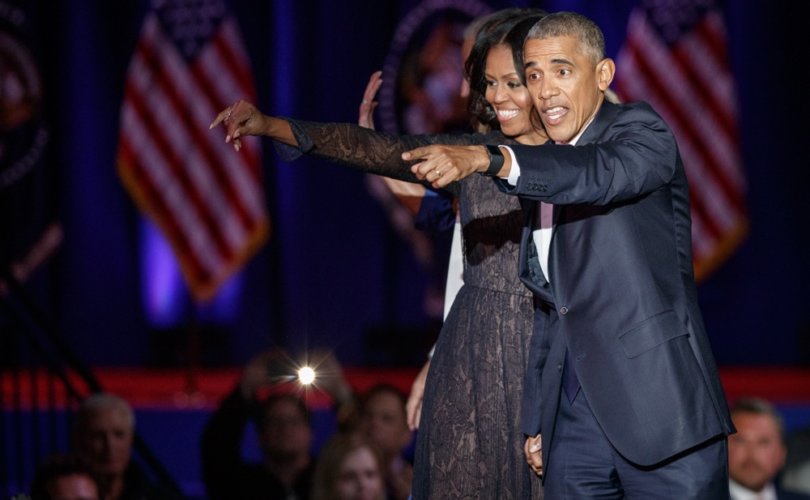 August 29, 2019 (Personhood Alliance) — Over 100,000 Americans have already cancelled their Netflix subscriptions over the streaming giant's threatened boycott of Georgia's economy after the passage of the heartbeat law. But new connections between Hollywood and government, and the Obamas in particular, are revealing a much bigger and much darker agenda at play.

A shock to the system

Netflix lost 16 billion dollars in market value the day after the streaming giant's Q2 financial report showed that it lost subscribers for the first time in 8 years. The company had projected to gain around 300,000 new U.S. subscribers, but actually lost around 130,000. Since the release of its quarterly report on July 17th, the company's stock has continued to decline.

Visibly shocked analysts attempted to explain this dramatic downturn by blaming Netflix's recent $2 increase to its basic membership plan, the general saturation of the streaming market in the United States, or the loss of a couple of popular old TV shows.

And yet, for Christian conservatives, Netflix's poor report was not unexpected or surprising. After all, over 100,000 people pledged to cancel their Netflix subscriptions by signing the Personhood Alliance/Citizen Go and LifeSiteNews petitions after Ted Sarandos, Netflix's Chief Content Officer, threatened to boycott Georgia's film industry over the passage of the heartbeat bill.

When announced, the petitions against Netflix attracted the attention of many major media outlets such as Newsweek and Fox who covered the story as an ongoing chapter in the American culture wars. Back in the early spring of 2019, as the Georgia heartbeat bill was getting ready to pass the legislature, a group of Hollywood actors, headed by the infamously pro-abortion actress Alyssa Milano, signed a letter vowing never to work in Georgia again if the legislature passed the heartbeat bill. Undaunted by the threats, the legislature passed the law. However, it wasn't until Governor Kemp signed the bill into law that Netflix became the first major studio to attack the legislation, quickly followed by the gender-confused folks at Disney and their fellow Leftists at Time Warner.

The fact that the big money waited to threaten Georgia until after the bill became law is not surprising, however, because Hollywood makes a handsome profit from filming in a state that offers a 20% tax credit for major productions. The tax credit, like all reductions in taxes, benefited not only the people of Georgia who found jobs in the film industry, but also the liberal Hollywood companies themselves, which have been fleeing the anti-business dystopia of California.

The sound of silence

Coming off of several successful threatened boycotts of pro-family states by corporate America, the Hollywood elites were feeling pretty good about their immoral virtue-signaling on abortion and their threats against Georgia's economy — that is, until Netflix's quarterly report came out. As soon as it became clear that the pro-lifers' campaigns to boycott Netflix had been successful, the media coverage of the boycotts went completely silent.

The boldness of the Hollywood elites in openly threatening a very large section of their client base (around 50% of the American people consider themselves pro-life), while shutting themselves out of a tax haven, is yet another indication that the cultural chasm which separates religious Americans from their secularized neighbors is increasingly unbridgeable for either side. More importantly, it is also an indication that the radical Left is no longer happy with the steady progress it has made since the 1960s to establish an atheistic cultural dominance. Now, the Left wants to completely silence dissenting Christians who dare to implement the biblical worldview through public policy.

Straight from the Marxist playbook

The idea of cultural supremacy, or hegemony, was one of the central principles of Italian Marxist philosopher Antonio Gramsci. He viewed the cultural hegemony of the ruling class at the turn of the 20th century as the main obstacle to bringing about his desired worldwide communist revolution. Of course, at that time, cultural hegemony was solidly at the capitalist end of the spectrum and was supported by religious and folk traditions. Gramsci argued that, in order to create the necessary conditions for a communist state, communist values would have to become culturally hegemonic. In other words, before the revolution could succeed, the people would have to view communist ideals as being commonsense ideas. Marxists called this “politics without politics,” and it was one of the key principles of American Leftist community organizer Saul Alinsky, a man whom Barack Obama credited in his autobiography as shaping some of his thinking.

This conscious drive to achieve cultural hegemony explains why Hollywood is so blatantly iconoclastic. In other words, they set out to intentionally attack settled beliefs and destroy religious symbols and traditions. What the Soviet communists attempted to achieve with tanks and a nuclear arsenal, Hollywood has largely succeeded in achieving through a constant debasing of Western culture and religiosity. The institution of the family — defined as a married virtuous couple open to caring for the previous and the next generations, and of religion being the guide to such a virtuous life — has been under attack from Hollywood elites who are following Gramsci's guidebook to create a Marxist State.

The play-by-play: Netflix and the Obamas

But going back to Netflix and the attempted pro-abortion Boycott against Georgia that backfired so spectacularly.

Why would Netflix in particular lead the way in so brazenly insulting conservative American's distaste for the liberal “sacrament” of abortion? Why would they jeopardize their wildly successful march towards cultural hegemony with such a move? To find this out, we can go back to Barack Obama's campaign promise to “fundamentally transform America.”

Throughout his presidency, Barack Obama weaponized the government against conservative opponents, bearing the full force of the Federal and FISA courts, the IRS, DOJ, FBI, ATF, HHS, and other State-funded bureaucratic acronyms supposed to be at the service of the American people. While in government, Barack Obama used all the means at his disposal to do what he said he would do, as the iconoclast that he is. But a major speed bump in the Left's long game came with the election of Donald J. Trump.

Trump's election was an event the cultural and political Left did not expect at all. Trump, a man who had never served in the armed forces, who had married three times, and had a track record of being anything but a moral leader, successfully tapped into the last vestiges of a virtuous America through his strong patriotic stance and his openness to Christian conservatives' policy priorities. Suddenly, the radical Left was out of political power, or at least out of elected offices, as the bureaucracy remains solidly in the hands of the Left. The most obvious place to migrate was, of course, from the political sphere to the cultural.

After failing to use the government to spy on Donald Trump and elect his Secretary of State, Hillary Clinton, as his own successor, Obama chose to cozy up to Netflix, signing an undisclosed deal that is rumored to be in the 100-million-dollar range. Although the Obamas have no experience in film production, they quickly incorporated a production company called Higher Ground, which, in addition to the Netflix rainmaker deal, has also signed an exclusive deal for the creation of podcasts with Spotify. All of this is in addition to the 65 million dollars they received for a book deal with Penguin. Needless to say, for a man who wanted to “spread the wealth around,” he is doing very well for himself in his retirement from public service.

But to be fair, besides his role as president of the United States, Barack Obama has always been a realist when it comes to self-interest. After all, Alinsky taught that self-interest, and not idealism, was the principle around which an organization should be built. In an interview with the leftist New Republic, Obama explained that “the key to creating successful organizations was making sure people's self-interest was met, and not just basing it on pie-in-the-sky idealism.”

Nowhere is this Machiavellian self-interest more evident than in Obama's long and lucrative relationship with Netflix.

Ted Sarandos, arguably the second highest ranking executive at Netflix, and his wife Nicole Avant had been some of the most important bundlers for Barack Obama, personally raising $700,000 in 2012. In 2008, Nicole would raise over $500,000 on her own and be rewarded with the position of United States ambassador to Bahamas. In March of 2018, in a never-ending revolving door between the Obamas and Netflix, Susan Rice, of Benghazi fame, was appointed to the board of directors of Netflix and only two months later, the Obamas were offered their massive production deal.

Putting all of this information in context, it's clear why Netflix — out of all the Leftist Hollywood elites — would be the first to bully and threaten the people of Georgia. It is also clear, though, that Netflix miscalculated the impact of carrying its executives' political proclivities so brazenly into the services it offered, for, unlike Obamacare health plans, people cannot be forced by the IRS to pay for Netflix.

Are you out yet? The top 10 reasons you should be.

Petitions work, and economic boycotts work. If you haven't yet canceled your subscription to Netflix, you need to seriously consider it right now. Here are 10 reasons why you should stop giving Netflix any more of your money, in case you're still not convinced:

Over 100,000 Americans who care about their children, their families, their Christian faith and values, and their country have already cancelled their Netflix subscriptions.

Click here to go to Netflix's cancellation page right now. Make sure to tell them you are a pro-life American who will never again give them a dime of your money, and then please tell others to do the same.

Gualberto Garcia Jones, Esq., is the president of the Personhood Alliance and a licensed attorney in the commonwealth of Virginia. He is a human rights advisor to the Holy See Mission to the Organization of American States and works in Washington DC to stop the expansion of abortion in Latin America.