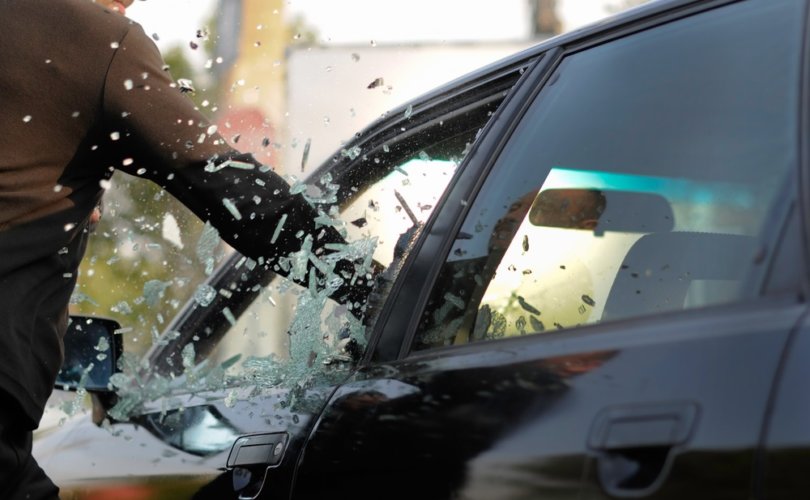 Lurking beneath the surface of virtue-signaling leftists are tyrants seeking to exert their will over those they despise. The defining leftist culture enables them to ruthlessly use all the power at their disposal, both real and imagined, to enforce a single acceptable viewpoint on society.

In some geographic areas, this is more obvious than in others, but no area will ultimately be spared. This week, my wife volunteered during the Virginia Republican primary. As people came by the booth to get information on the candidates, she offered these Republican voters an opportunity to sign up for yard signs. Most whispered that they could never put something like that up in their neighborhood. That's understandable. Unless a family is willing to stand guard 24/7 over their property, a Trump bumper sticker or sign here is a risky proposition at best.

And so the Northern Virginia neighborhoods surrounding us are dotted with almost exclusively Democrat yard signs and the ubiquitous and unintentionally ironic “Hate Has No Home Here” signs that blare that their homes are sanctuaries of vile hatred and small-minded contempt.

When people can't put a bumper sticker for their preferred candidate on their car, they have suffered a loss of liberty. No Republicans who have paid even a little bit of attention expect the prevailing powers in Democrat areas to safeguard their property or even their lives and liberty. The very reason for establishing a government has been upended. In this area, liberty-minded people almost operate like a secret society, sending quiet signals to one another.

Democrats in this country do not feel they need to hide their political allegiance or culturally approved viewpoints. Most never shut up about it, believing they are speaking truth to power, even as they bask in the approval of the corrupt and wicked power centers.

Nobody gets to sit this one out. The cultural enforcers expect everyone to parrot their talking points publicly, to destroy all resistance, forcing dissenters to grovel in submission. That's the whole idea behind the “silence is violence” aggression. Cultural violence is quite the opposite of silence; it is forcing people to say what no sane person should believe in order not to be destroyed.

Few stand against this pressure, which is why nearly all major companies and organizations have come out with quisling statements of support of the name of a vile Marxist organization like Black Lives Matter. It's why Hillsdale College's response was so notable, because it was a rare exception to the rule. (This was not surprising coming from one of the only places in America still putting up statues to honor our tremendous heritage of liberty when the cultural zeitgeist is to rip them all down and start at a Marxist Year Zero.) Hate groups like Antifa and Black Lives Matter operate quite freely in this environment, serving as the cultural shock troops and the terrorist wing of the cultural tyrants who have taken over the Democrat party.

Consider just a few of the displays we've watched over the last few weeks. A football coach had to apologize for wearing a One America News sweatshirt…in Oklahoma. We watched as most of our senior military leaders bowed before their cultural masters. We watched as statues of George Washington, Thomas Jefferson, Francis Scott Key, Theodore Roosevelt, Abraham Lincoln, and even an assortment of abolitionists either were destroyed or came under attack, even as discussions of replacing the National Anthem erupted from the propaganda and activist cultural tyrants.

We watched as the weaponization of the federal bureaucracy by a U.S. president against a president of the opposite party was unveiled before our eyes to a massive shrug by the seditious media, who see it as a wonderful use of state power by their fellow leftist travelers in the bureaucracy. They are smug in their belief that they can use their cultural power to protect the perpetrators, whom they regard as heroes.

We even watched as a sports league that caters to a conservative audience was complicit in perpetrating a crazy Jussie. We observed an emboldened social media giant censoring the president of the United States for promising to protect Americans.

We also watched what I believe is the vilest propaganda campaign of my lifetime, when every cop in America was slandered as a racist with barely a protest. The guardians of civil order, who put their lives on the line every day, often under unimaginably difficult circumstances, to protect their fellow Americans, are being demoralized and hounded out of service. This has created the fertile ground for a massive increase in lawlessness that will result in a significant rise in the deaths of black Americans, showing that black lives matter not a lick to those claiming that name.

I wish I had a dollar for every American who uttered the phrase “never in my lifetime did I expect to see…” over the last few weeks. We are living in the upside-down when patriotism is outlawed, the vilest of criminals are celebrated, and brave law enforcement officers who put their lives on the line daily are slandered as the worst of society so thoroughly that it descended into evil farce, when a kid's show, Paw Patrol, came under attack since it is apparently racist to have a positive police character in a children's show.

This is war, and the left is playing to win. Anyone who doesn't get that by now, to include most of the NeverTrumps, is either irredeemably stupid or an active collaborator. Every pillar of cultural power in America, to include the unholy trinity of academia, the media, and government, has declared cultural war on at least half the country. Yet NeverTrumps reserve almost all of their scorn for those with the audacity not to drop to their knees and surrender.

It is long past time for Republicans to fully understand the enemy and take up this fight. The phrase “silent majority” has been bandied around quite a bit in the last couple weeks. Americans are silent because the cultural tyrants ensure there is a price to pay for any peep of sane protest, which is also why Republican voters are undercounted in polls.

The problem is that the silence enables the leftists to continue to drive the narrative and normalize ideas and behaviors that would have been considered unfathomable just a few short years ago while winning more converts, which shrinks that sane majority. It is their toxic ideas that are being force-fed to every young person in America, and we are paying a heavy price for that.

I'd like to see far more people vocally pushing back against the mob within their social circles. Every person who pushes back emboldens others to do the same. There also needs to be a sustained and concerted effort to retake academia, the true center of gravity whose main product that it is returning to America is Marxist cultural tyrants.

The culture war matters when you are living in a cultural tyranny. If you believe Andrew Breitbart, that politics is downstream of culture, we are getting dangerously close to losing everything, to include our liberty.

Fletch Daniels can be found on Twitter at @fletchdaniels.