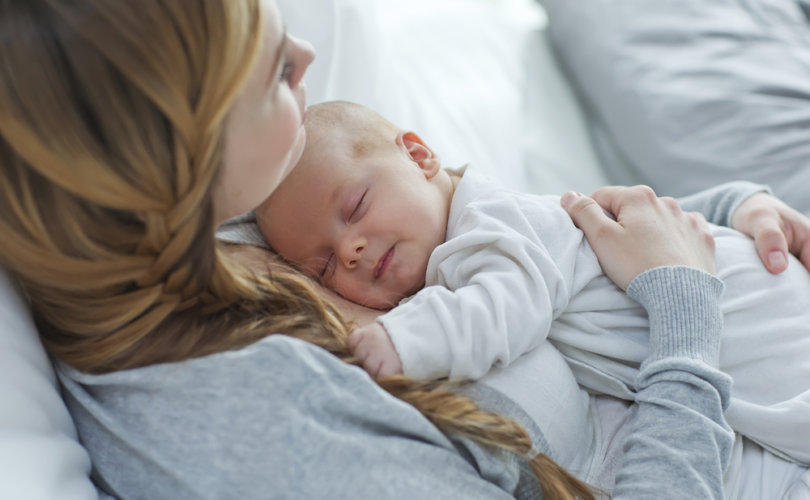 February 15, 2018 (Pregnancy Help News) – For all its fuss and bluster about the need to “Believe Women,” the Left—and in particular, its fervently pro-abortion core—sure is bad at believing women.

Case in point, over 400 women say they’ve rescued their children from abortion after having taken the first of two pills in a chemical abortion—euphemistically called “the abortion pill” or RU-486.

Each woman says she changed her mind after taking the first pill and rescued her baby through a life-saving treatment known as abortion pill reversal (APR).

Yet, despite the first-hand testimony of these women, abortion activists insist that APR is a scam, cut from whole cloth to advance a pro-life political or religious agenda.

In their blind opposition to APR, abortion cheerleaders—who once pretended the high ground on “choice”—are robbing actual women of the very real choice to stop their own abortions and rescue their children instead.

Meanwhile, abortion supremacists are treating mothers who’ve saved their babies through APR as if they don’t exist, or worse—as though they’re lying about their own stories and children in order to push a treatment they know to be a farce.

Same goes for the Left’s loyal army of junk journalists, who are working overtime to keep abortion-survivors unseen and unheard rather than run the risk of the truth sneaking out into the open.

What to do, then, with 400-plus troublesome women like Rebekah Buell, Shanelle Felder, Amy Mendozaand Cynthia Galvan—let alone their precious children?

Rather than obediently accepting the fate of her unborn son after she took the first pill of the chemical abortion regimen back in 2013, Rebekah Buell rescued her son’s life through the 24-7 Abortion Pill Reversal hotline.

An employee at Planned Parenthood told Rebekah her baby would suffer deformities, complications or worse if she chose to stop her abortion once it was started, but she eventually welcomed a perfectly healthy baby boy she named Zechariah—“The Lord has remembered.”

Shanelle Felder was fed a similar line at a Planned Parenthood in Denver, where she buckled under pressure from the abortionist and took the first pill. “I had no chance to plead with him,” she said.

Thankfully, a friend connected Shanelle to the APR network, and she found a local doctor who gave her an emergency dose of progesterone to save her child’s life that night.

In the days that followed, doctors started Shanelle on an ongoing treatment of progesterone injections to off-set the effects of the first abortion pill. Between appointments, she also visited Alternatives Pregnancy Center, where she was able to see her baby, Lillian, with a free ultrasound.

“Upon seeing her daughter’s heartbeat on the ultrasound screen, Shanelle recalls the sensation of ‘knowing what love is,’ and the ‘euphoria of knowing that my child is still alive,’” reads an amicus brief filed with the U.S. Supreme Court. “Although she was still anxious, it was ‘amazing to see this baby that still survived.’”

Amy Mendoza had read stories like Rebecca’s and Shanelle’s on social media by the time she resorted to abortion in late 2015. The moment she took the first pill at Planned Parenthood, Amy realized she’d made a mistake and started looking for options to rescue her son, Cruz.

“I heard the baby’s heartbeat,” Amy said. “I always say, ‘Live life without regret,’ and at very moment, I felt that very regret come full throttle. Every time I look at him, I’m just so thankful.”

Like Rebekah, Shanelle and Amy, Cynthia Galvan—one of the first women to reach out to APR and its founder, Dr. George Delgado—was told by Planned Parenthood staff it was too late to change her mind after she’d taken abortion pill No. 1.

Instead, Cynthia’s son, Christian, will turn 8 later this year.

These are just four snapshots of women who have chosen life after starting a chemical abortion. Are they not newsworthy? Are they not compelling enough stories to tell?

Why aren’t these women worthy of belief?

Recent coverage at Politico is a perfect example of the media’s role in silencing women like Rebekah, Shanelle, Amy and Cynthia.

As she cheers on one abortion company’s billboard campaign meant to discredit APR, Politico’s Victoria Colliver spends a dozen paragraphs warning readers of APR’s “unproven” and “dangerous” nature—never bothering to explain that APR is just a new use of an FDA-approved medical treatment around since the 1950s. In spite of her dire warnings, Colliver is unable to produce even one example of an APR client to illustrate the “danger,” even though APR has been attempted close to 1,000 times since 2007 with a success rate of 57 percent.

And forget about hearing from women who’ve saved their babies through APR. Colliver goes out of her way to sideline them. Consider the following quotation, which is the nearest Colliver comes to acknowledging the women:

Advocates of abortion reversal, including Ohio-based Heartbeat International… point to firsthand accounts that they say show abortions can be stopped. ‘A woman who regrets starting a chemical abortion should get to change her mind and find help,’ said Jay Hobbs, spokesman for the group, using the anti-abortion movement's term for a nonsurgical or medical abortion. ‘What’s at stake here is a woman’s right to choose life for her child.’”

You’d think a person identifying as a journalist would be more interested in following up on “firsthand accounts” wouldn’t you? After all, that seems like the logical starting place if you’re looking for the truth—or at the very least, if you’re pretending to “Believe Women.”

No such luck at Politico, and it’s no better at most news sources either.

In the same vein, VICE News, Salon and others have reported breathlessly since late January that they’d uncovered emails between top officials in the Office of Refugee Resettlement (ORR) discussing APR as an option for illegal immigrant teens who might want to change their minds after starting a chemical abortion.

Though VICE News is more than happy to point out that the American College of Obstetricians and Gynecologists (ACOG) denounces APR as “unethical” and “unproven,” it fails to mention ACOG’s straightforwardly pro-abortion stance.

Coverage from VICE News and others also leaves out the fact that over 350 physicians and counting have put their medical licenses and reputations on the line to join the APR network over the past five years.

Tellingly, Vice News also leaves out key APR endorsements from even pro-choice physicians—including Yale School of Medicine’s Harvey Kliman, who told The New York Times he would recommend the treatment to his own daughter in an interview last summer.

More to the point, the piece makes just a passing reference to the first seven women who rescued their children through the treatment as of 2012—ignoring the vast majority of women who’ve turned to APR to rescue their children from abortion.

Now let’s hear from the women.