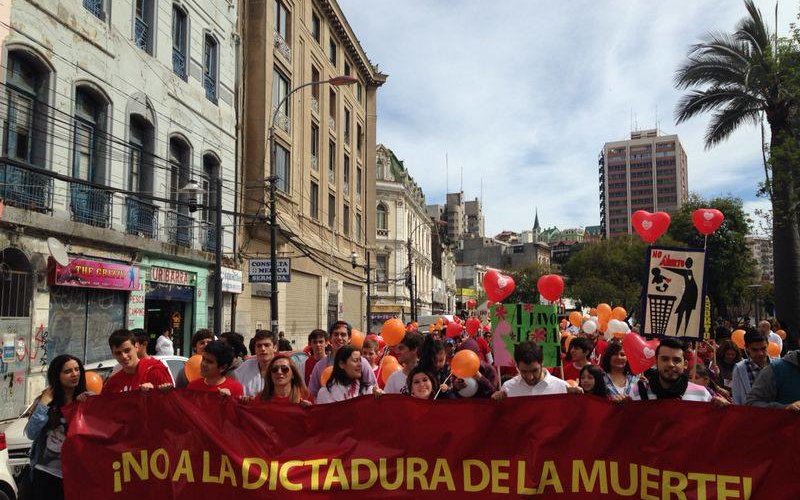 March for Life in Valaparíso, Chile—September 6, 2014. Sign reads: “No to the dictatorship of death.”

Chile’s lower legislature on March 17th, for the first time in that Catholic country’s history, approved of a bill that would legalize abortion in cases of rape, fetal abnormality, and when the mother’s life is at risk. It remains to be seen how the Senate will act on the measure.

Chile is one of the few countries left in the world today that still protects human life under all circumstances. The vast majority of Chileans have a deep and profound respect for the dignity of motherhood and for the value of every human life. According to polling data from the Pew Research Center, 64% of Chileans believe that having an abortion is morally unacceptable.

Abortion advocates have long claimed that Chile’s laws defending human life place women at risk of higher mortality. They suggest that women are dying from pregnancy-related obstetric emergencies as well as from dangerous illegal abortions.

But research carried out in Chile shows this is not true.

Since abortion became illegal in Chile in 1989, maternal mortality has actually decreased by 69%.1

In fact, there are proportionally fewer maternal deaths in Chile than in the United States where abortion is widely available.2 The legal status of abortion has had absolutely no effect on the health of women in Chile. In fact, making abortion illegal may have actually decreased the number of clandestine abortions. Be that as it may, the death and hospitalization rates due to abortion have decreased since 1989.3

Bachelet’s abortion bill would have a number of serious consequences.

For one, minors will be placed at risk of suffering the multiple physical and emotional pains of abortion. Bachelet’s bill makes abortion available for girls as young as 14 years of age with parental consent. If both parents do not consent to their daughter’s abortion, she can choose which parent she wants to provide the necessary consent to terminating the life within her.

Rather than making abortion available in only rare circumstances, as abortion activists would have us believe, the bill has the potential to make abortion in Chile commonplace. The reason for this is that the bill lacks any mechanism for verifying the claim of rape. Women who want to obtain an abortion could—and often do, in other countries—simply claim that they were raped when they want to obtain an abortion. Bachelet’s law would require doctors to take such a claim at face value.

But who would ever falsely claim to have been raped in order to obtain an abortion? Consider the case of Ethiopia, where abortion is quite common. Abortion is illegal in Ethiopia except in cases of rape, incest, fetal deformity, life and health of the mother, and in cases where the mother is deemed “physically as well as mentally unfit to bring up the child.” The vast majority of Ethiopian women who are seeking an abortion claim they have been raped. As the Global Post reports:

Rape is a well-documented problem in Ethiopia, but clinic workers say the number of rapes being offered these days as reasons for pregnancy termination strain credulity…“Almost all of our clients, the reason is rape,” says Biadig Amsalu, a health officer and clinical nurse at a Family Guidance Association clinic… visitors would be hard-pressed to realize that abortion has any restrictions on it at all.

The “rape exception” has created a culture of abortion on-demand in Ethiopia.

In the South American country of Colombia, something similar has happened. The Colombian Supreme Court originally allowed abortion for only three narrowly defined reasons and it was presumed that abortion would remain rare. Since abortion was legalized 10 years ago the number of abortions performed for reasons of “mental health” have skyrocketed. In Bogotá alone, 97.4% of all abortions in public hospitals are carried out for reasons of “mental health.”

This means that doctors who are unwilling to perform abortions will still be required to violate their consciences by facilitating them. And in cases where the mother’s life is “in danger,” doctors will not be allowed to invoke conscientious objection rights. As for the directors of medical facilities, it appears they will be out of luck. Bachelet’s bill insinuates that hospital directors do not have any conscience protections at all.

Leaving conscious objection rights in the hands of the Bachelet Administration would not be in the best interest of Chileans.

For one, Bachelet’s presidency has been marred with economic stagnation and scandal. Last year it was revealed that her son, Sebastian Davalos, and his wife profited $5 million dollars off a privileged real estate loan deal. Bachelet’s approval rating has plummeted to the lowest levels for any Chilean president in the past decade. GfK Adimark’s latest poll has Bachelet’s approval rating for March at a dismal 26%, much lower than, say, Obama’s.

Before Bachelet’s current presidential term, she served as the first executive director of U.N. Women (formerly the U.N. Entity for Gender Equality and the Empowerment of Women), a progressive United Nations agency that lobbies for the legalization of abortion worldwide.

As Executive Director of U.N. Women, Bachelet was given an award at the 20th anniversary gala for the Center for Reproductive Rights (CRR), a radical pro-abortion organization dedicated to legalizing abortion on-demand throughout the world. A lawsuit originally filed by CRR against the State of Texas for its law requiring abortion facilities to follow the same standards required of all other ambulatory surgical centers was recently argued before the U.S. Supreme Court.

In her acceptance speech at CRR, Bachelet praised the abortion group saying, “I thank you for all that you [CRR] do[es].” Emphasizing her belief that abortion is a reproductive right, she also said, “until all women can enjoy…reproductive rights, we will draw the line and hold the line. Reproductive rights are absolutely fundamental to gender equality and women's empowerment.”

As former Executive Director of U.N. Women and as a long-time public servant, Bachelet is expertly versed in the language used by abortion advocates used to shame pro-lifers into legalizing abortion.

Reading from carefully prepared remarks, Bachelet argued that abortion should be allowed in cases of rape: “We cannot force on her the continuation of the pregnancy if she does not want to continue it as a result of its origin.”

Yet never does Bachelet mention in her frequently repeated talking points why unborn children who are the product of rape or who have congenital disabilities should be deprived of the same right to life guaranteed to all citizens. Rather than legalizing abortion, efforts should be focused on clamping down on violence against women. Providing services that respect women’s health—physically, mentally, emotionally and financially— should be a priority rather than simply looking for ways to terminate the life within her.

Bachelet has argued that legalizing abortion is an equality issue. Wealthy women who want abortions are able to pay high fees to doctors to illegally procure them or are able to travel to other countries such as Uruguay while the poor are forced to obtain abortions from less scrupulous sources. Bachelet fails to mention, however, that for years she has allowed radical pro-abortion organizations like Women on Waves to operate hotlines in Chile instructing poor women on how to use pills to perform back-alley abortions.

Bachelet has stated publicly that her abortion bill is a compromise between what her supporters want and what she believes can be passed by Congress. That is a fair warning that this is only the beginning. We can expect that with the legalization of abortion, Bachelet and abortion activists will continue to push for abortion on-demand.

Bachelet’s bill is very bad news for Chile’s women and their babies.

[4] The medical surgeon applying for conscientious objection must provide it both in writing and prior to encountering a situation in which invoking such a right would be necessary; en forma escrita y previa.