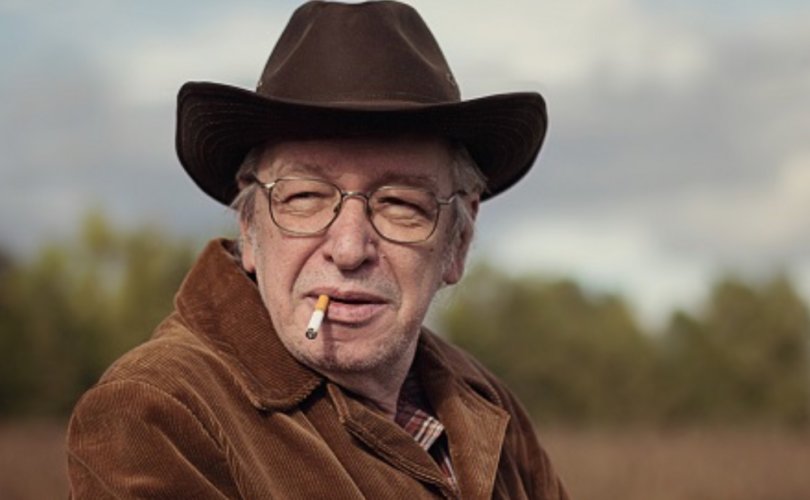 RICHMOND, Virginia (LifeSiteNews) — Olavo de Carvalho, the Brazilian philosopher, writer, and educator who devoted himself to the intellectual life and the education of a new generation of conservatives, died on January 24 at the age of 74.

A prolific writer, Carvalho published more than a dozen books and hundreds of articles on various topics. A legitimate philosopher, he investigated and deciphered the soul of modern men with distinctive acuity. A true educator, he taught an army of students formally and informally through courses, soliloquies, and colloquiums.

Since the 1980s, Olavo de Carvalho has been one of the few Latin American intellectuals who perceived, studied, and fought the dominance of the Left in universities, the media, and literature. Thanks to him, authors such as Mário Ferreira dos Santos, Roger Scruton, and Father A-D. Sertillanges were published and read in Brazil and other countries.

His first-rate philosophical work produced results such as the theory of the 12 layers of personality, and deep analyses of authors such as Aristotle and Machiavelli. His texts and classes, many of them recorded and available on the internet, instilled in people of the most diverse origins and social status the importance of intellectual work and the moral duty of responsibility over one’s own actions.

He had the ability to communicate easily. He was able to write and speak with disconcerting clarity. With the freedom and humor peculiar to a man of his greatness and intelligence, Olavo de Carvalho routinely published short sentences, texts, and videos on social media, many of them sprinkled with swear words and suffused with wrath, almost always due to the condition of being a loner amid general ignorance, as he used to say.

In their pettiness, the mainstream media have judged him by tweets and isolated phrases. They have slandered him with scandalous ferocity. His very death has borne witness to the homogeneous network of work formed by the international media, as he proved so many other times in life, which repeats the lies and desires of small groups until they are accepted as uncontested truths by the masses. A simple Google search for “Olavo de Carvalho death” returns numerous reports of his death that identify him as the Brazilian President Jair Bolsonaro’s “guru”, a characterization invented by the national media.

Olavo de Carvalho had nothing to do with the government other than the intellectual influence he exercised over the President and members of his government, as he did over so many people who drink from his thought. As he often emphasized, the war against communism is not in the political arena, but in the cultural, religious one. A moral culture is needed, a culture that preserves what is good, ethical, and worthy, something almost non-existent in Latin America and waning wherever it exists in the world, including in the United States, where he lived for the last 16 years and where he has died. However, it is undeniable that Olavo de Carvalho was the man responsible for preparing the ground for the largest Catholic country in the world to elect for the first time in decades a non-leftist president. He did this through education and awareness about the cultural war of the modern era, not through political militancy.

His work and thought will remain for years to come. Like water running through the hands, his legacy will run its course despite the slanders of the socialist dominant class. But his achievements must be measured by, and admired for, the conversion of thousands of people to the Holy Catholic Church. A devotee of St. Pio of Pietrelcina and Our Lady of Fatima, Olavo de Carvalho, or Professor Olavo de Carvalho, as many of his students and admirers prefer to call him, made countless people confront themselves, judge their own behavior, and eventually see themselves before Jesus Christ as their Lord and God. He has done it through intellectual argument and the sincerity with which he used to narrate his own experiences. He has influenced priests and lay people who have overcome progressivism and have several times found in him the inspiration not to abandon the path of sanctification. He converted many atheists and others outside the Church who have returned to the Father’s house. He was, in short, God’s instrument for the salvation of the souls of many men and women.

As St. Bernard of Clairvaux explains, men live in such a condition that it is impossible for them not to commit sin. Olavo de Carvalho was a man, so he has failed and he has learned.  He has made mistakes, just like everyone else, but the good he has done prevails. He has made himself as useful as he could. It is up to us to work in order to continue what he has started. Let us pray for his soul. May God receive him with mercy in heaven.