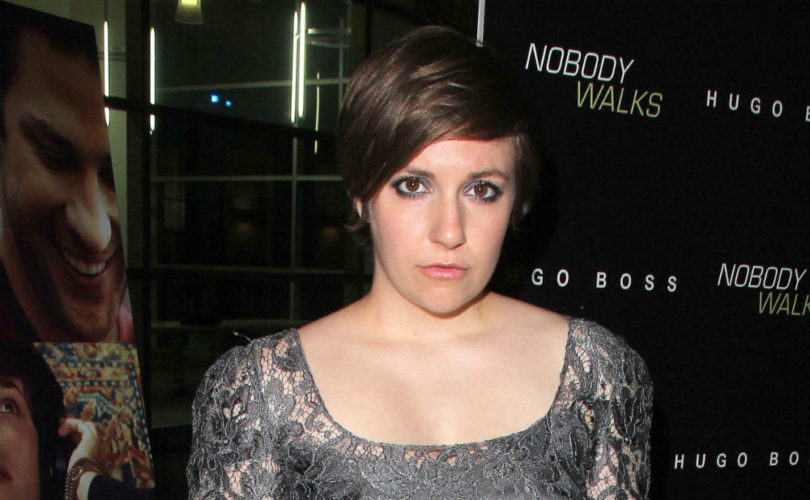 You may have heard of Lena Dunham. She’s the star of HBO’s hit show Girls, which centers around a set of rich, white 20-somethings struggling heroically to figure out what to do with their lives in the face of their crippling privilege and wealth.

If you haven’t, don’t worry. You’re not missing much.

But whether you’ve heard of her or not, her voice carries a lot of weight among her peers, which is why the nation’s largest abortion chain, Planned Parenthood, recruited her to send an email to their supporters earlier this week encouraging them to vote in the upcoming elections.

As was noted in the New York Times recently, we are facing a crisis of adulthood in America right now, and young Lena seems to be calling her compatriots to rise to the occasion and take on some adult civic responsibility.

But as she laid out her third reason to vote—the weary old trope that politicians are trying to take away your birth control—she said something that made me stop in my tracks:

When you can’t get access to affordable birth control, suddenly your sex life is ruled by fear.

All I could think when I read that was, “How sad.” How very, very sad to be completely unable to relate to your partner sexually without fear unless you’re aided by pills or contraptions.

Ironically, part of Dunham’s public persona is that she’s open and unafraid sexually. On her show, which nobody should ever watch for this reason among many, she takes her clothes off with frightening regularity and engages in all manner of sexual activity with a variety of partners, much of it degrading and devoid of any genuine love or connection.

This stance of “sex positivity”—supposed to be the antidote to the old, stodgy, Victorian mindset of her forebears—constantly accuses older generations of being “afraid of sex.” But it seems that it’s Dunham and her cohorts who are scared of sex unless they’re properly medicated or neutered.

Religion is often accused of being the root of older generations’ supposed fear of sex. But it’s interesting to note that, in this age where sex is plastered on every screen and billboard, it is religion that is still calling people to the root of sexual union that sends Dunham running scared: the wild adventure of fertility and family.

It is religion that reminds us that the begetting of children is the primary functional purpose of sex, that bades us not to disconnect sex and fertility, but to welcome God’s gift of life into our lives through the thrilling conduit of sexual congress.

Dunham thinks the gutsy thing is taking your clothes off and jumping into bed, but she’s wrong. What takes real courage is facing down the fear of accepting new life into your care and committing yourself to becoming responsible for it. True openness to sex is opening your heart to the life that God may choose to give when you enter into the marital embrace.

It’s not easy, and I don’t blame her for shying away. Your body has the power to create a human being, Lena! You should be in healthy awe of that. And without the grace of God and a committed marriage, answering God’s call to bring forth the next generation is a fool’s errand.

But it’s a bit rich to call on Planned Parenthood’s supporters to rise to the challenges of adult responsibility while admitting that you’re too scared to take it on yourself. Perhaps this generation would do better to listen to the grown-ups that were brave enough to bring them into existence instead of taking their life advice from Girls.