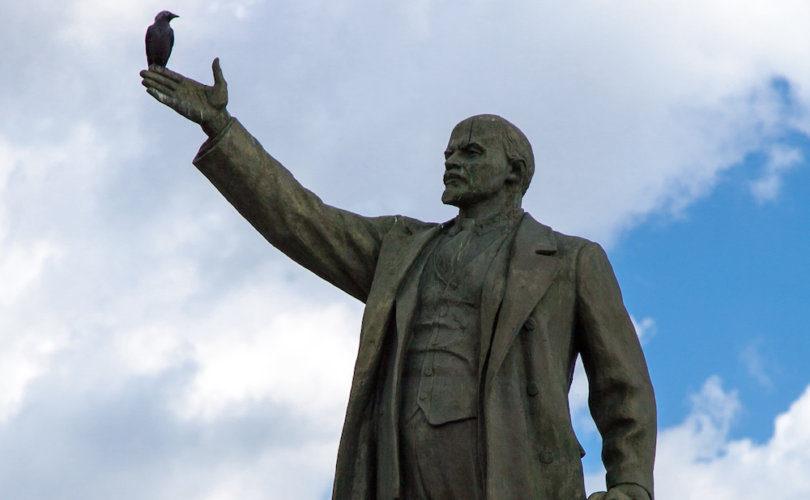 (American Thinker) – It is sobering to recognize how many crimes against humanity first recommended themselves as admirable courses of action prompted by the benignly framed ideological obsessions of activist intellectuals. It would seem that there is nothing inherently civilizing in the pursuit of what has been called “the life of the mind,” especially if the mindful individual is merely looking for a more solid foundation on which to ground and justify his hatreds. V.I. Lenin stands as the paradigmatic exemplar of this. His place in history is secure, but only owing to his improbable success in seizing, holding, and then ruthlessly exercising power in an exhausted and fragmented Russia. Had his gamble failed — had his coup fizzled — history would have remembered him (if at all) as a minor journalist and political organizer operating on the fringes of the international socialist movement. Yet with his triumph, history decided otherwise, leaving us stuck with Lenin and his legacy. A thoughtful examination of that legacy, and of the monomania that drove it, is key to understanding the Left.

As a Marxist, Lenin held that the whole of human history is driven by class struggle. If any teaching were central to Lenin’s thinking, it was this. Indeed, for Lenin, virtually every aspect of the human experience could be identified with this one thing. Not only politics, but also art, science, and philosophy were all reduced to arenas of class struggle. The political supervision of all cultural activity would be one of the ways in which victory would be consolidated once the Bolsheviks seized power.

To be on the right side of history one must always be on the right side of its central defining contest, and the righteous path was exceedingly narrow. Even the subtlest deviation could place one in the enemy camp. Lenin’s thinking might be described as a doctrine of the “conservation of political energy.” In a world in which all human activity is part of a grand political struggle, any act that fails to support one side in that struggle necessarily supports the other — so any deviation, any dereliction of duty, any disagreement with Lenin’s way of thinking, was equivalent to a defection to the enemy camp, even if the accused defector were an avowed socialist dedicated on principle to the same aims as Lenin. To act in any fashion inconsistent with the edicts of the leadership — to even question those edicts — was to side with the enemy.

As one might imagine, this provided the leadership with considerable repressive latitude, especially as the enemy was subject to continual redefinition. When property ownership determines class identity, wealth and social position settle the issue. But the ranks of the class enemy broadened significantly. The real battle was against those who harbored politically prohibited thoughts and inclinations deemed supportive of the enemy. Ultimately, the definition of the enemy was at the discretion of the denunciatory authority, so the enemy changed as policy focus shifted, or as the leadership itself changed. The enemy being elusive, a vigilant police state that trafficked in denunciation was justified, and this made Stalin’s intraparty slaughters possible. Under Stalin, rivals were denounced as class enemies, purged from the party, tried for their “crimes,” and sent to their deaths.

We simply cannot bring ourselves to weep over the fate of those Communists eviscerated by the buzz saw they themselves had sharpened, oiled, and set in motion. In any case, Stalin’s self-serving manipulations of Lenin’s legacy of hatred is not our focus here. One must recognize the enemies of the Left encompass far more potential victims than are inevitably found among their comically ill-fated wayward accomplices.

We may regret that we are compelled to look to the internal dynamics of one of the most violent and repressive one-party states ever established so as to better understand the deeper dimensions of our current national debate. But this can hardly be avoided since both draw from the same well of ideological bigotry and hatred that fuels the Left. It sometimes seems as though the Left exists solely to bestow upon a certain class of intellectual lightweights a license to hate, as well as an opportunity to mobilize an army of less accomplished haters behind them. And it is these lightweights who would presume to lecture us from the highest perches of moral sanctimony.

But here they are — our most intrepid moral improvers — and they have tasked themselves with converting us all into “anti-racists.” Oh, happy day! Under the aegis of the currently fashionable postmodern protofascist “academic framework” known as “critical race theory” (embraced by teachers unions, innumerable corporate HR departments, and, evidently, even the DOD) our would-be re-educators inform us that all human history and all social interactions are driven not by class struggle, but by racial animosity.

In many ways, this monomania is more Hitlerian than Leninist. The “anti-racist” agenda allows the social justice fascist to equate the human experience with racial hostility and to divide the human race into the virtuous few (the “anti-racist” activists) and everyone else, who must — simply by virtue of non-inclusion in the former group — be racists! The conservation of political energy allows for no nuance when used as a criterion of political classification. And with classification, comes vilification. So for the recalcitrant, only condemnation awaits: All who withhold their support from us are racists! Any who might question us are racists! Life under the “anti-racists” is but a show trial, and we are all defendants in it.

The eradication of “racism” (as defined by the critical racist) is just another attempt by leftist bigots to exercise their self-awarded defamatory and repressive latitude on the rest of us. Just as Lenin and Stalin used the presumed ubiquity of the class struggle to defame and destroy their enemies — even up to and including rival Marxists who shared their aims — so too do the social justice charlatans use the presumed ubiquity of racial animosity to defame and destroy any who would resist them, up to and including those who might unwisely exhibit insufficient enthusiasm for their cause.

The forced ideological recruitment of the indifferent is a hallmark of the totalitarian political style, a style now openly championed by the American Left. The benefit of the doubt is never to be extended to the as yet uncommitted, and neutrality is simply not defensible given what is said to be at stake in the Grand Struggle. Those who fail to meet the Left’s political expectations are all enemies to the Left — whether they see themselves as such or not. And where are the traditional liberals? Shivering under their beds, no doubt.

The “academic frameworks” of postmodern racial fascism are the inspiration of those who thoughtlessly protest a society to whose virtues they are blind. Trained to despise their as yet unconverted contemporaries, these fanatics scowl indignantly and hold signs sporting such slogans as “white silence is white violence.” “Share our hatreds!” they order us, “and do it publicly, and to our satisfaction — or suffer our wrath.”

This kind of political demand has absolutely no place in a free society. People of goodwill of all races, creeds, backgrounds, and vocations — no matter what else might divide them — must unite in rejecting this trash. This is what totalitarianism looks like; let us recognize it for what it is and let us not be intimidated by it. Let us engage it, expose its illiberal roots, shame its promoters, disillusion its partisans, and — in that spirit — let us crush it.