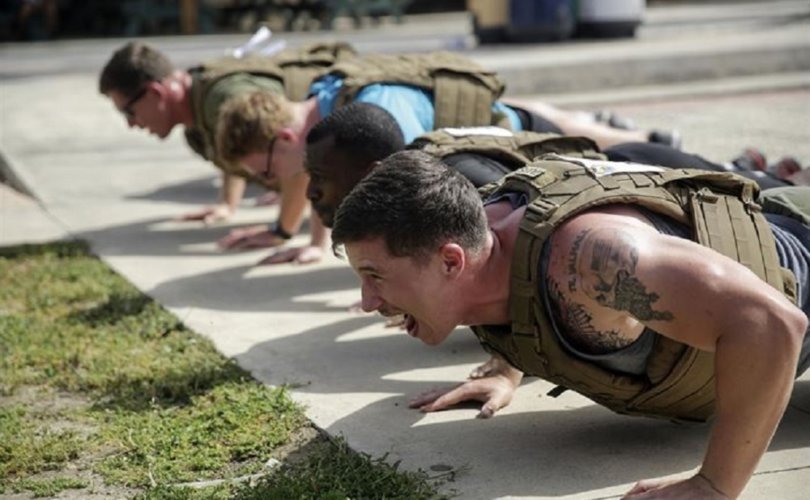 March 6, 2018 (Community in Mission) – A disturbing report came from the Pentagon in 2014 that speaks to the overall condition of our country. Here is a summary:

Nearly 71 percent of the 34 million 17-to-24-year-olds in the U.S. do not qualify for military service for reasons related to health, physical appearance, and educational background, according to the Pentagon.

Obesity is the most common reason for being turned away, but others are disqualified because they lack a high school diploma/GED, are convicted felons, or are taking prescription drugs for ADHD. From a cosmetic standpoint, ear gauges and certain tattoos. While some requirements can be waived, others cannot.

The upshot is that only 1 percent of young people are both “eligible and inclined to have conversation with” the military about possible service, according to the Defense Department. The quality of people willing to serve has been declining rapidly (Sources: Time and the Wall Street Journal).

There are of course many standards by which to judge the health of a nation, but military readiness is surely one of them. As Rome declined something similar happened. The Roman Army was increasingly staffed by mercenaries, many of whom were barbarians or slaves. Roman citizens lost interest in defending their land, but they also lost their fitness for such duty through luxurious living, weight gain, alcoholism, and sexually transmitted diseases.

What of us as a nation? Obesity among the young has increased dramatically since I was a boy. Young people today engage in less physical activity than the youth of my time, who watched much less television and did have not computers or video games to fill their time. We rode bikes, played pick-up football, and built tree forts. In those days, fewer than 1 in 20 kids was obese. Today, it is about 1 in 6. It also seems to me that there is something different about the food we eat today. I ate a lot throughout my 30s without gaining a pound; so did most people my age (I am in my late 50s). Something seems to have changed in the way food is prepared; I suspect a lot more sugar is being used.

As for the other problems of no high school diploma, prescription drugs for ADHD, felonies, and tattoos, this speaks to the decline of family life and the overwhelming influence of social media and those little blue screens that engross so many of us.

Of course I am a priest, not a sociologist, nutritionist, or doctor; but nothing in this report bodes well for us. On a spiritual level, it also speaks to our difficulty in accepting and being ready for sacrifice. Indeed, there is more than a physical war to be fought; there is also a spiritual one. Scripture speaks of this:

Thus, even as we mourn the loss of battle-readiness in our nation, we also need to lament the lack of readiness for spiritual combat. Too few of us can bother ourselves to fast, even for an hour before Holy Communion. We find it difficult to get to Mass on Holy Days, to spend time each day in prayer, or to give up something on Fridays. Even the smallest sufferings can cause us to become discouraged and depressed.

Simply criticizing ourselves may not be the answer. Rather, calling on God to assist us in getting ourselves “back into shape” may be better. Pick just one or two things to work on, for example spending more time in prayer or offering a sacrifice (e.g., abstinence) on all Fridays of the year. Once these have been accomplished, try to add others. “Fast” from foolish shopping; restrict your portion sizes. Small, consistent steps may get us further than self-reproach and pursuing unrealistically ambitious resolutions.

Too many of us are out of shape for battle! Lent is a time to do some spiritual pushups and to take up the fuller armor of God.