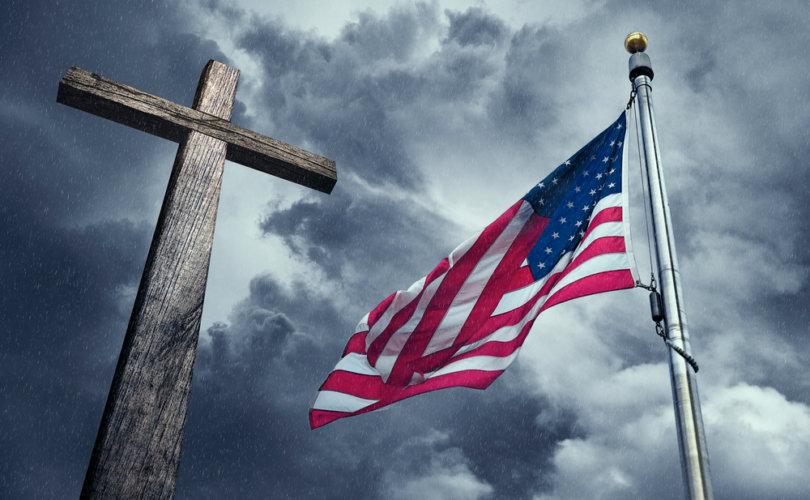 American flag underneath the crossShutterstock

(LifeSiteNews) – Fr. Mike Schmitz once said, “There’s no greater life that can possibly be lived than the life as a Catholic Christian.”

As we proceed through Holy Week and into the Triduum, I can’t stop thinking about this truth. On Holy Thursday, Christ instituted the Eucharist—the source and summit of our faith. The Eucharist is truly His body, blood, soul, and divinity. And as Catholics, we are immensely blessed to be able to receive Him at every Mass if we are free of mortal sin.

On Good Friday, Christ died for our sins. But death did not have the final word, for on Easter Sunday, He conquered death.

He did all of this for you. For me. So, indeed, there’s no greater life that can possibly be lived than that of a Catholic Christian.

But just as Christ was under attack by the forces of evil during His time, so do we find ourselves under attack. Two recent stories caught my attention, and though they are just a drop in the proverbial bucket of modern-day attacks on the faith and on morality, seeing them during Holy Week makes me ever more resolute in the desire to keep fighting the culture of death.

In news out of Delaware, we read that the Delaware General Assembly recently passed legislation that would allow physician assistants and advanced practice RNs to prescribe the abortion drugs Mifeprex, Mifepristone, and Misoprostol. The bill now awaits the governor’s signature.

These deadly drugs not only kill babies, but they harm women, and now Delaware may give prescribing privileges to even more people. With Biden’s relaxation of the law allowing the mailing of these drugs, we see just how easy our government wants to make the chemical killing of preborn babies.

Second, we read a report in Crux which warns that “leadership at the Catholic Benefits Association believes the U.S. Department of Health and Human Services will soon announce new regulations that may pose an existential threat to religious-based employers including Catholic hospitals.” It goes on to say that the “HHS has promised to revise its mandates on health plan coverage and performance to include surgical abortion, cross-sex hormones, gender-transition surgeries, gender-affirming cosmetic surgeries and voice modification—along with a host of expanded services dealing with fertility treatments, contraception, abortifacients and sterilizations.” According to this report, these new regulations would “disallow religious exemptions.”

So what does that mean for Catholic hospitals and charities? It means the government would either force them to comply with these regulations or to shut down.

Take a moment to really think about the implications of our government forcing Catholic organizations to go directly against Church teaching. I hope you find yourself both horrified and scared. I know I do. But I also find myself angry. And that reminds me of a certain scene in a synagogue.

Remember when Jesus became so angry in the synagogue because of all the buying and selling that was going on there? After He turned over tables, He said, “My house shall be a house of prayer, but you are making it a den of thieves.”

Not much has changed in the last 2,000 years. We still have people attempting to make the Church a den of thieves, and many of these wicked people claim to be part of the Church. So-called Catholics in politics want to twist the Church to make it conform to what they believe. They refuse to adhere to Christ’s teachings and conform their lives to what He taught.

Abortion is the taking of an innocent human being’s life. This tiny child depends on his mother to care for him, to protect him, and to love him. But many in our world and in our government tell him he’s not worth care, protection, or love. They are wrong.

But it’s not just me saying it’s wrong; it’s God Himself.

God gave Moses the 10 Commandments. The fifth tells us not to kill. Christ did not divert from these commandments; He upheld them. He didn’t say it’s okay to kill someone when his life is an inconvenience to you. No, as He told the rich young man, “If you wish to enter into life, keep the commandments.” And then He went even further and told the young man to give up everything and follow Him.

To attain heaven, we must keep the commandments. We know that we need not give up all of our worldly possessions and follow Christ, but we do need to give up our worldly mindset. We must think like children of God and put aside any proclivity toward selfishness and hedonism. We must put aside everything that distracts us from Him and from following His commands.

On Friday, we weep with Mary and John, who stood helpless at the foot of the cross. But despite the sadness and despite the ache in our hearts that comes as we look upon Christ’s beaten and bloody body, we know the end of the story. We know that He triumphed over death, over sin, and over evil.

So, as we look to Christ on the cross, let us remember that we did nothing to deserve this gift. But we can strive every day to be worthy of His sacrifice. Our worthiness begins with driving the thieves out of His house, standing up for the voiceless, following His laws, and protecting His Church.

For indeed, “There’s no greater life that can possibly be lived than the life as a Catholic Christian.”