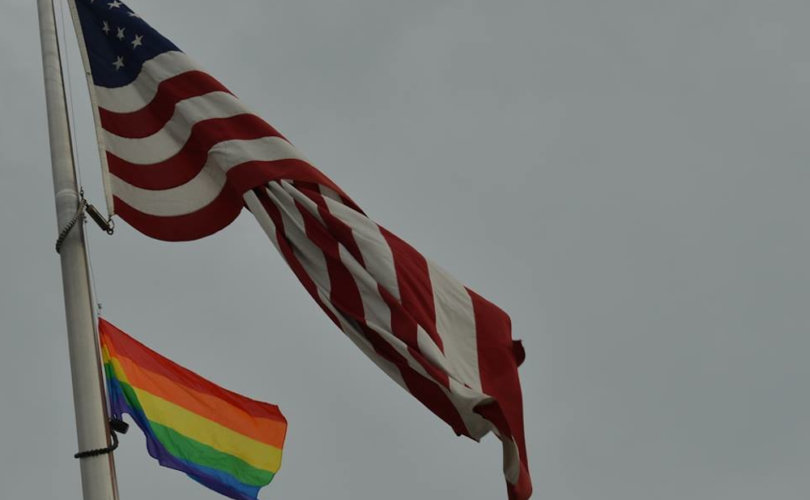 July 31, 2018 (LifeSiteNews) – Should U.S. embassies around the globe fly rainbow flags to celebrate homosexuality? Or hold receptions to honor “pride”?

Of course not.  In fact, it’s such an in-your-face insult, it reminds me of something former President Obama and former Secretary of State Hillary Clinton might devise.

Oh, wait—they did that. In fact, it was under their leadership that numerous openly homosexual ambassadors were appointed and “gay” behavior began to be enthusiastically not just embraced but championed through America’s diplomatic corps, even in nations that still have laws against such immorality.

And it’s still going on. Why doesn’t Trump put a stop to this nonsense?

The formal invitation bears the U.S. embassy seal and reads: “The Embassy of the United States of America Charges D’Affaires Eric Khant requests the pleasure of your company at the PRIDE JA Opening Reception 2018 on Tuesday, July 31, 7:00 – 9:00 p.m.”

Jamaica has not passed a law either decriminalizing male sodomy nor a law legalizing homosexuality as so-called “marriage,” yet there is now a Jamaican “Pride” celebration the first week in August supported by a group called J-Flag which is supported by the Rustin Fund and the Tides Foundation.

And also supported by our U.S. Embassy.

The Jamaican contact who sent me a photo of the embassy invitation said this: “Linda, why is the American taxpayer funding the subversion of our culture?”

Good question. When will our State Department stop its unauthorized promotion of homosexuality and gender rebellion around the globe?

The U.S. State Department doesn’t need a special envoy for “LGBTI” rights, for instance. This nationally-insulting position was created under the Obama administration and formerly held by Randy Berry, a career diplomat and one of the many homosexuals in the State Department. He served under John Kerry but left the position in 2017, and the post is currently vacant.

This position should be eliminated. Because what “human right” is upheld by the proud endorsement of behaviors that are unhealthy and present a danger to any nation’s youth? Same sex sexuality and gender rebellion also defy the will of God, our loving Creator.

A new bill has just been introduced by Rep. Jeff Duncan of South Carolina that would ban any flag other than the American flag from flying at our embassies around the world. That will mean the rainbow flag (and all other flags) cannot share the mast.

Rainbow flags were flown at many embassies during the Obama years. Jamaica is one such embassy. Some have done so even under Trump.

We also don’t need the State Department sponsorship of a “Global Equality Fund” started under Hillary and continued under John Kerry. It’s a pile of “gay” activist cash funded by private businesses and foundations, for global homosexual promotion using the imprimatur of our diplomatic corps. Hillary believes “gay rights are human rights,” but as with so many issues, she is wrong.

What law passed by Congress does this diplomatic priority reflect?  There is, in fact, no such law. It’s an unauthorized use of our diplomatic influence.

It would also be really nice if new Secretary of State Mike Pompeo refreshed his strong conservative principles and ceased lending support to the homosexual agenda within the State Department and these unauthorized activities around the globe. Unfortunately, Pompeo issued a statement  in May on the so-called “International Day Against Homophobia, Transphobia and Biphobia” which gives credence to this agenda. This sentence was troubling:

“Around the world, far too many governments continue to arrest and abuse their citizens simply for being lesbian, gay, bisexual, transgender or intersex (LGBTI)….”

It’s troubling because of its implication that some people are inevitably “born this way.” Yes, we are all opposed to violence and that is a basic human right.

But no, Secretary Pompeo, there are no people who are inevitably born to engage in such conduct. Please stop affirming this deception.

Governments should be free to put legal, non-violent restrictions on the public endorsement and embrace of chosen immoral behaviors – which these are – simply for societal order and the protection of youth.

Homosexual and gender discordant behaviors are destabilizing cultural influences that spread disease, foment religious persecution, and put children at risk. We have ample evidence now in this country.

This is the opposite of human rights as God has revealed in Scripture. Homosexual conduct is unnecessary and unnatural, pulling God’s created humans away from Him rapidly and inexorably—unless there is intentional retreat, repentance and redemption.

Honoring these behaviors is a disgrace to America, and we need to urge the Trump administration to withdraw every program and action that supports this dark and destructive conduct within other nations.

If you wish to contact the White House and urge Trump and Pompeo to end the global promotion of homosexuality/gender rebellion, please go HERE.

Our Creator must be terribly sad at America’s faithlessness. The precious gift of America must not be squandered. We serve as a beacon of freedom and true human rights to the whole world, and as a source of powerful Christian witnessing and mission support.

Let’s get our heads straight and our policies appropriate as we deal responsibly with the sin of homosexuality.