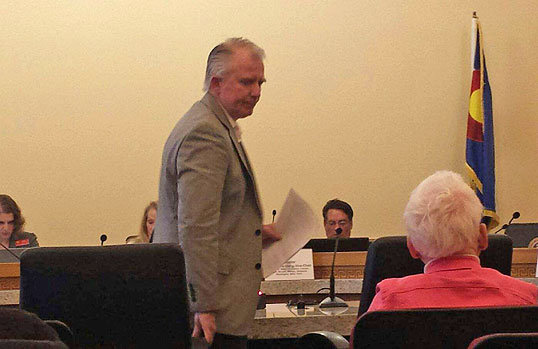 This MassResistance Colorado parent finished his unflinching testimony, and right afterwards the Senate Committee voted 3-2 to defeat the bill!

May 10, 2017 (MassResistance) — When pro-family people fight back hard and tell the truth fearlessly, they can derail the well-funded LGBT legislative agenda. We’ve shown that over and over again. This was one of those times.

A frightening bill that would allow children as young as 12 years old to “decide” they need psychiatric therapy – without their parents’ knowledge or consent – was stopped in the Colorado Senate on Monday, May 1. The 3-2 vote by a Senate committee came after strong testimony at the public hearing by Colorado MassResistance and other pro-family activists against a torrent of emotional pleas by the bill’s proponents.

The bill, HB17-1320, had passed in the Colorado House of Representatives the previous week. Had it made it through the Senate committee, it would have gone to the Senate floor for a full vote.

A nightmare for families

As we recently reported, the bill would have allowed LGBT-allied “therapists” in school-based clinics to push vulnerable children to affirm and accept homosexual and transgender “identities” and behaviors as “normal,” among other things. Parents would not even be notified that this psychotherapy was being given to their children.

The thwarted plan had terrifying implications for parents and families. Children are emotionally defenseless and can easily be persuaded by adults that they need counseling “help” from unknown, agenda-driven mental health professionals. These therapists could diagnose and “treat” the children with whatever approach they chose, without knowing vital medical history or other information from parents, or being accountable to them.

The original version of the bill, filed on April 5, set the age of consent for outpatient psychotherapy to 10. But the bill’s supporters got nervous, and at the House Committee hearing they changed it to 12 to help it pass.

Apparently it was expected that the bill would pass and become law. Therapists were already being placed in Colorado’s  school-based clinics, according to a MassResistance Colorado parent who researched it.

Proponents use “suicide prevention” as a lobbying tactic

The LGBT movement has been quietly but forcefully pushing these bills across the country for nearly a decade. They use “suicide prevention” as a lobbying tactic. They get local allied groups to come and give emotional “suicide attempt” testimonies. They try to persuade legislators that parents are a big part of the problem, and thus the children need “independence” from their interference.

They make their case as emotional as possible. It can be compelling to legislators, unfortunately, if not properly countered by good, solid pro-family testimony.

At the Senate committee public hearing, the bill’s proponents were well organized and their testimony was slick and well scripted.

Fourteen came to testify. They were from various Colorado left-wing social-work foundations  and suicide-prevention organizations, a transgender group, the University of Denver, and a Latino group. Besides activists, they included teenagers, a young child, and a liberal rabbi and a liberal psychologist.

Most of their testimony included very emotional depictions of personal trauma and attempted suicide. But their overall strategy was to make parents seem like the “enemy” of their own children, or at least too incompetent to be allowed to decide.

They testified that “parents don’t have the resources or education to do what’s right” and “are not equipped to deal with children’s mental health needs.” Also, “parents are often the cause of their children’s stress,” and may likely be abusing their kids. Strangely, most of their testimony was not pertinent to the bill because it related to older teenagers and young adults.

One of the bill’s sponsors, a Senator, even testified that “parents don’t have the right to be the only ones” who direct their children’s counseling decisions – the State must be included.

Parents fight back even harder

Five pro-family people who came to testify – including two from Colorado MassResistance, a constitutional attorney, and representatives of Colorado Citizens Commission on Human Rights and Lutheran Family Services.

They warned the Senators that the bill allowed for a dangerous overreach by mental health staff at schools. It virtually removed accountability for therapists (to parents or anyone else) and would lead to inappropriate testing, misdiagnoses, and bad treatment plans. It would certainly prompt lawsuits because of the bill’s dubious constitutionality, given the history of Supreme Court decisions favoring parental rights.

In particular, the MassResistance Colorado parents demanded that it’s vital that parents be involved for many reasons. A child is not competent to provide adequate mental health history or other important information. The child can’t competently decline therapy against the persuasive powers of a school clinic or choose a different venue and travel there. In fact, there is a conflict of interest between the clinic’s funding and the fact that the child can be a captive patient.

And there was guaranteed to be outrage over the presumption that parents don’t have the best interests of their own children at heart, or the competency to deal with their emotional problems.

The MassResistance Colorado parents also submitted a letter by Dr. Michelle Cretella, President of the American College of Pediatricians, against the bill. Dr. Cretella strongly advised the legislators that adolescents are not capable of making these kinds of judgments about their mental health and psychological therapy. It was the only actual medical opinion in the hearing.

The committee votes to kill the bill

Immediately after the testimony, one of the bill’s Senate sponsors, Sen. Stephen Fenberg, spoke up and made a disturbing remark dismissing the rights of parents. It reflected the arrogance of the bill’s proponents – and their anger that parents came and confronted this bill. Fenberg said, “In response to the parents’ rights argument, I don’t get it.” He believes that the state has just as much of a right to raise the children. He went on to describe one opponent’s testimony as “disgusting.”

Right after that,  the committee voted 3-2 to effectively kill the bill for this session. Needless to say, the bill’s proponents didn’t like the outcome at all. The parents – and common sense – had won!