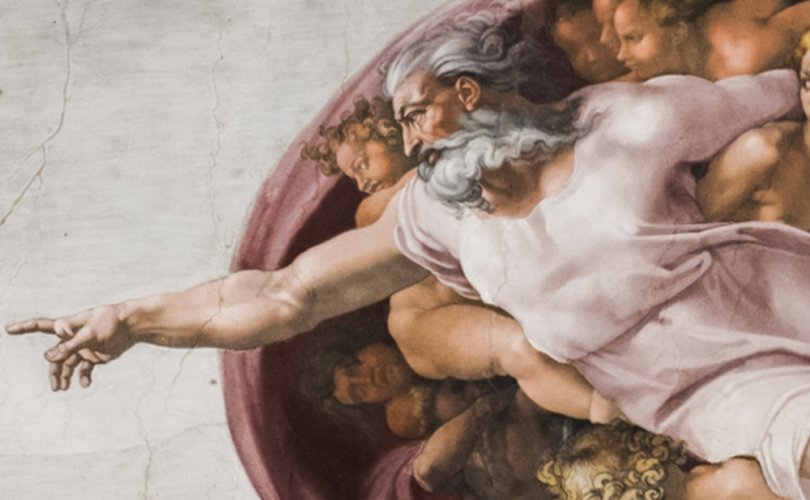 Detail of God in Michelangelo's Creation of Man inside the Sistine Chapel in Vatican City.Creative Lab / Shutterstock.com

April 6, 2020 (LifeSiteNews) – Anyone who thinks that the coronavirus crisis represented a truce in the raging culture war is very mistaken. The war is only going to accelerate.

Likewise, anyone who thinks there is a need to construct complex conspiracy theories to explain what is happening is also mistaken.

“Progressive” thinkers clearly state how they conceive the post-corona order. They do not think in terms of a narrative in which everything will return to normal. They say the storm will pass, but the world will be changed forever, preferably in their own liberal image and likeness.

The thoughts of these visionaries should be a cause of concern to those who defend a moral order and the Faith. Their forecasts exclude the views of such defenders as hopelessly backward and even dangerous.

One such visionary is Yuval Noah Harari, a history professor at the Hebrew University of Jerusalem. He is no writer on the fringe of things. His books have become New York Times bestsellers and enjoyed endorsements from people like former President Barack Obama and Bill Gates. If anyone can speak for the liberal establishment, Harari has the credentials. His post-corona forecast appears in the staid establishment mouthpiece, The Financial Times.

His worldview also reflects a secular world without Faith. In his 2017 book, Homo Deus, Dr. Harari argues there is no God, no soul and no free will. For him, life is merely a succession of chemical reactions and algorithms that interact and evolve with nature. He believes that techno-enabled humanity will eventually become immortal gods.

Thus, this postmodern wizard represents the cutting edge of progressive thought. That is why when he speaks, it makes sense to listen. The author makes three chilling observations about the post-corona future that should not be ignored.

The first observation is that the coronavirus crisis is going to change the economy, politics and culture radically within a short time frame if world leaders act “quickly and decisively.”

This crisis will “fast-forward historical processes.” They will allow officials to conduct massive experiments, using even dangerous technologies. Decisions that normally would take years or even decades of deliberation will be passed in a matter of hours. In this climate of panic, people will accept measures that they would never agree to do in normal times.

Those who share this vision do not desire a return to normal. They want a different order that reflects their worldview. This future is not presented as a choice but a consummated fact. The crisis will quickly impose it upon the nations. There is no turning back to an old order.

Implicit in the declarations of Prof. Harari is that old paradigms must change in conformity with “global solidarity.” Old fashioned ideas will no longer work in this brave new world. Informed technocrats using “science” and data will be much more capable of ruling the world than elected officials.

The most disturbing aspect of this observation about the future is its stealth character. It enters into the scene, not unlike the coronavirus, quickly and without the consent of those directly affected.

The second observation of Dr. Harari is the coming age of universal surveillance of citizens. He notes that the coronavirus crisis is already bringing online instruments of public monitoring that dwarf all past efforts to keep watch over people.  The coronavirus crisis threatens to “normalize the deployment of mass surveillance tools in countries that have so far rejected them.”

The progressive visionary is not so naïve as to think this technology cannot be harmful or dangerous. A smartphone that transmits the location of virus victims can also be programmed to monitor temperature and blood pressure. Medical monitoring can also record biological phenomena like emotions, joys and anger. It might measure reactions to conservative or liberal ideas found online. All this data can be harvested and sold to corporate marketing departments…and government agencies.

However, the writer claims that universal monitoring can also be a source of citizen empowerment. Monitoring can be beneficial when moderated by institutions that build relationships of trust. His solution is not to rebuild trust in the family, community or church. Instead, he lists institutions that have betrayed this trust in the past and are found at the core of the culture war.

Thus, the progressive narrative of the coronavirus crisis follows the Harari script by presenting the false dilemma of either accepting an enlightened technocracy or irresponsible totalitarianism. He excludes real alternatives more in line with America’s past.

The final observation presents yet another false dilemma. The professor claims the post-corona society must choose between what he calls “nationalist isolation and global solidarity.” The normal option of a nation that affirms its own identity yet shares a common humanity is not on the table. Effective action facing the crisis can only be done through not-always-voluntary global cooperation.

Thus, nations need to “share” information, technology and discoveries globally. There must be a spirit of global cooperation and trust. It is a rather ironic conclusion since few trust the Chinese authorities who failed to “share” the news of the illness when it broke out. Western scientists continue to question the Chinese communists’ creative use of statistics to support their agenda.

This new solidarity must transcend all political, philosophical and cultural differences. A communist government, Islamic theocracy or brutal dictatorship are all equal in this vast effort to save lives. He foresees a kind of universal community coordinated by enlightened leaders and technocrats.

“Just as countries nationalize key industries during a war, the human war against coronavirus may require us to “humanize” the crucial production lines.” The noted author foresees rich nations coming to the aid of poor countries even to the point of pooling medical personnel and distributing vital supplies more fairly. Global cooperation is also needed on the economic front as rich nations will be “invited” to share the wealth.

Such communal dreams of global cooperation are hardly new. They have long populated the dreams of utopian social planners who are only too willing to impose their plans upon the world, always with catastrophic results. Nevertheless, the panic of this crisis is how the inconceivable becomes possible.

A Future Without God

The three observations of Yuval Harari all have characteristics in common. The first is a noted hostility toward the culture war perspective of countless Americans. They are dismissed as forces of disunity that oppose “science” and global solidarity.

A second alarming characteristic is a willingness to sidestep established procedures and freedoms to impose their worldview upon the nation. Whether it be through quickened historical processes, universal surveillance or global “cooperation,” the underlying message is the need for supra-governing mechanisms to do what is best for humanity.

Finally, the Harari game plan excludes a moral framework based on objective standards of right and wrong or even the rule of law. As one who believes in neither the soul or free will, he denies any role of religion and God. His is a cold, brutal world without purpose or redemption.

The Harari narrative is found in the daily avalanche of news. It is easy to find the measures, methods and goals he outlines interwoven into crisis. A recent editorial in The Wall Street Journal by Henry Kissinger repeats the idea that the crisis “will forever alter the world order.”

Conspiracy theories need hidden methods, unchecked power and massive networks to be believable enough to find adherents. However, in the case of the coronavirus crisis, who needs conspiracy theories? Thinkers like Yuval Harari openly write about their chilling post-corona future without God.

Fortunately, God also has a future in mind. He writes straight with crooked lines. He might have some surprises that progressive visionaries cannot see.