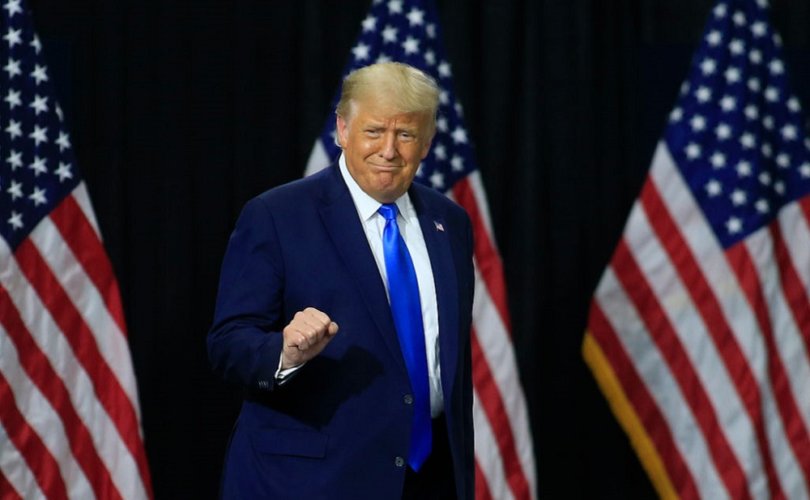 September 26, 2020 (American Thinker) — Is an unexpected October Surprise on the way?

They think it's a bad thing, but I give The Nation credit for reportorial digging. The hard-left magazine has discovered that federal law enforcement agencies (though not the FBI) have been tracing whom the mobs in Portland have been communicating with. The apparent lead role in utilizing hi tech and classified electronic means is being played by the Department of Homeland Security's Office of Intelligence and Analysis (I&A), while the U.S. Marshals Service is dispatching street-level personnel. This bypasses the FBI, whose director, Christopher Wray, is on the record in sworn testimony, dismissing any such superstructure:

“It's not a group or an organization. It's a movement or an ideology,” he said, explaining that “folks who subscribe or identify” with antifa do not operate at a national level, but instead organize “regionally into small groups or nodes.”

A current DHS official described a colleague with expertise in electronic surveillance who was being deployed to Portland. But for what purpose? “Extracting information from protester's phones,” the DHS official said. While in Portland, an interagency task force involving DHS and the Justice Department used a sophisticated cell phone cloning attack — the details of which remain classified — to intercept protesters' phone communications, according to two former intelligence officers familiar with the matter.

Cell phone cloning involves stealing a phone's unique identifiers and copying them to another device in order to intercept the communications received by the original device. The former intelligence officials described it as part of a “Low Level Voice Intercept” operation, declining to go into further detail — one of them citing the sensitive nature of the surveillance tool and the other an ongoing leak investigation within I&A.

“You're getting an inside view into your targets, who they are, who they're talking to — the hierarchy,” the former intelligence officer said, explaining that many within the DHS believe that antifa is an organized group — as opposed to the largely spontaneous, decentralized ideological tendency that most experts, including Trump's own FBI director, believe it is. DHS intelligence has even found some limited evidence, which he considered thin, of foreign sponsorship. Attorney General William Barr, however, recently claimed that antifa is receiving foreign sponsorship — a necessary criterion to formally designating it a terror organization, which President Trump vowed to do in July. (The Nation recently reported on DHS intelligence's attempts to tie antifa to Kurdish militant groups in Syria.)

“Signals intelligence collection would not be useful for preventing opportunistic looting or violent confrontations. It presumes the existence of coordinated, purposeful, and unlawful activity that is conducted through electronic means,” said Steven Aftergood, who heads the Federation of American Scientists' Project on Government Secrecy. “The general concern is that DHS treated mass public protests — not just violent individuals — as suspicious and targets of investigation, or worse.” (snip)

In addition to signals intelligence collection, the Portland operation involved clandestine aspects, according to the former intelligence officer. This appears consistent with a tip received this summer. Several members of the US Marshals Service (USMS) — part of the Justice Department — sent to Portland claimed to be affiliated with a private firm called “Strategic Oil,” according to travel records obtained by The Nation. While they did not identify themselves as law enforcement, the travel records contain information indicating that they were marshals, including that they were given a special discount for federal government employees. Clandestine methods tend to be used only for the most sensitive operations, more commonly overseas than domestically. (The Justice Department did not respond to multiple requests for comment.)

News Thud, from which I learned of The Nation's reporting, suspects that an October Surprise is on the way.

So the DHS and the FBI have been listening to Antifa and they know who in the media and in politics they have been talking to. You can tell by reading the report from The Nation, the left is getting real nervous about this because it is the number one report on their website as of the writing of this post.

Last May, Posobiec (of OAN) warned that media ties to Antifa would be exposed:

Now you know why so many people are freaking out today

I have been saying for years that President Trump understands better than anyone else that in this age, politics is a reality TV show for most people and that a three-act structure has the greatest impact. Well, we are in Act Three, folks, when questions and conflicts raised in Acts One and Two are answered and dramatic conflicts start to be resolved.

To put it differently, Rush Limbaugh correctly predicted some weeks ago that the real issues that would affect the election were not yet on the table. The death of Ruth Bader Ginsburg and the media obsession with her successor may be considered the first of such issues and the beginning of Act Three. The activities of John Durham and the other federal prosecutors may also figure in the act. But if the activities of the DHS and U.S. Marshals Service lead to indictments or at least the exposure of the ties behind the rioters, that could provide even more factual basis for voters to reconsider assumptions that the media have foisted on the public.