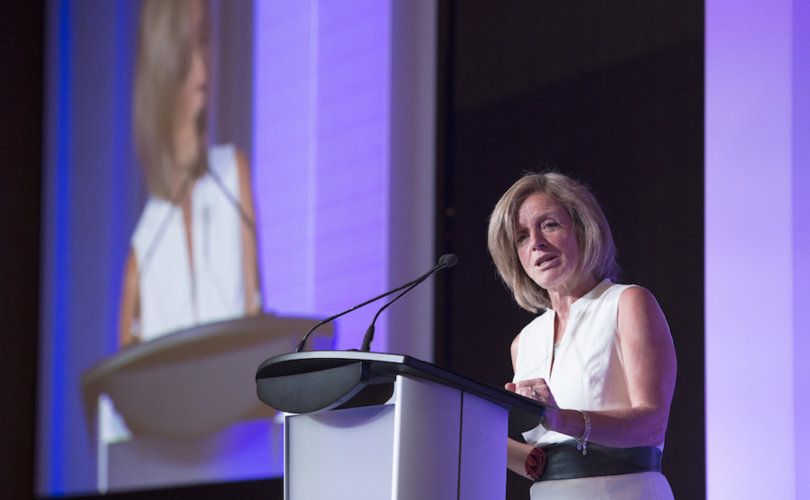 November 7, 2017 (Everyday for Life) – Have you heard what Alberta's Premier Rachel Notley said about family life and parenting recently? That it's “super-cruel” to inform parents that their child is a member of a gay/straight alliance in school. She has also stated in a desperate attempt to win a re-election that the new United Conservatives, led by Jason Kenney, will be harmful to gay children. She's playing gender politics and using children as pawns. It's also an open attack on Christians and anyone who disagrees with identity politics and the early (abuse) sexualization of children.

The premier has publicly come out against parental rights. Notley believes that the province can love and do a better job of raising children than their parents. Here you have a premier whose Minister of Education who sees nothing wrong with innocent children being sexualized at an early age and introduce them to pornography. Of course Eggen knows how to care for children more than their parents. This is complete and dangerous rubbish.

It's so wrong and disrespectful to children. Just consider what is happening in the province and keep in mind that the anti-parental rights wave has swept the nation. The United Nations has been pushing the same agenda through comprehensive sex “education” for decades. So, the top politician in Alberta tells parents that they need not be informed about their children's sexuality or the content of sex “education” lessons. To inform parents or consult with them has become “super-cruel.” Why do Notley and the Education Minister David Eggen want to sever the bond with parents? Because it's much easier to brainwash them. Do these politicians believe that parents will teach their children what is harmful? They actually do. Have parents become the problem in delivering a progressive education? Yes, it's parents who are now the obstacle to make believe gender land.

Both Eggen and Notley don't deserve to re-elected. They can't be trusted. They have mocked parents and undermined parental rights. They have wrongly suggested that parents don't care for their children and that provincial bureaucrats can do a better job at nurturing and teaching them what's important. It's time to end this destructive myth being pushed and legislated that children belong to the state. Children belong to God and are given to parents as a gift to be taken care of and raised with love and sacrifice. To Rachel Notley and David Eggen: keep your radical sexual politics out of families and away from our children. The real cruelty and abuse against children are coming from governments advancing explicit sex “eduction” programs, not parents. Just take a look as the Alberta government tells Cornerstone Christian Academy what parts of the Bible they can and cannot teach. It won't be long before the Bible itself will be considered hate speech. This directly undermines and attacks Christian belief in God, parental rights, freedom of speech and the family.

What Notley is espousing was once articulated by Hillary Clinton in “It Takes a Village.” She argued: “I believe the primary role of the state is to teach, train and raise children. Parents have a secondary role.” Hillary is totally mistaken. It takes parents to raise good children. The state should have a secondary role, unless the government has a political agenda: to undermine parental authority in order to indoctrinate children about homosexuality, gender identity and gender expression. Notley, nor any other politician, owns the nation's children. Children are not products like lumber, gold, oil and electricity. However, Notley and Eggen want Canadians to accept this misguided view that children are a product of the state.

It's the progressive myth of socialism that permits Notley to assume she has the right to violate parental rights. And not only that but to then say that parents who disagree with the government agenda are “super-cruel.” In this dystopian NDP world, there is no need for parents to be informed about what their children are being taught. Bottom line: Notley has no respect for parents. She doesn't trust them. This is a Caesar that is out of control. A Caesar that has the power and feels it's entitled to do whatever it wants. Christian and family values are of no importance to Alberta's NDP Marxist government. Children and families have become a means to an end. This is why the government has threatened to remove funding from Christian and private schools that refuse to teach “diversity education,” read establish gay school clubs, sexualize children at an early age and promote the cult of gender identity. Parents who refuse to celebrate this view have become an enemy of the state like Steve Tourloukis. This Hamilton parent has been in court since 2012 battling for his parental rights against the school board, the province of Ontario and the elementary teachers' union who are intent on forcing all Ontarians not just to accept but celebrate “diversity education.”

What should be troubling to parents in Canada isn't Notley criticism of the United Conservative Party, but her condescending attitude towards ordinary parents: that they are “super-cruel” in wanting to be informed so they can decide what's best for their children's education. Instead, “good” parents for Notley should always back Caesar and not question provincial radical sex “education” programs. Notley is the real cruel one. She has no respect for parents and parental rights. Parents now know that the New Democratic Party resents parents who disagree with gender politics and want the parental right to transmit the faith or alternative values. Parents should do whatever they can to make sure that not one candidate in the NDP is re-elected, including the Premier Rachel Notley. Ditto for the Kathleen Wynne Liberal government of Ontario. Canada sadly is not a great place to be today as a parent.

Reprinted with permission from Everyday for Life Canada.