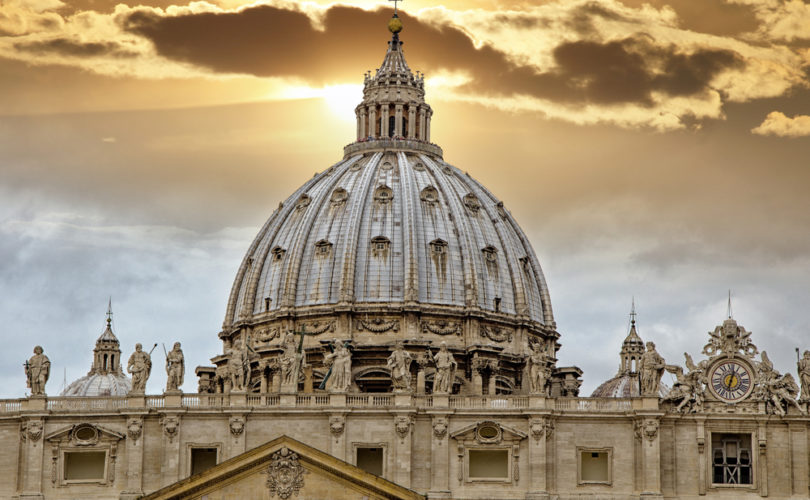 September 12, 2018 (LMS Chairman) – This must count as one of the most absurd comments on the clerical abuse crisis centred, for now, in the United States. The attempt to carry on as if nothing at all was happening, always the first recourse of the bureaucrat to a crisis, has at this moment not only failed, even according to a supporter, but become utterly ludicrous. Of course people are more interested in Archbishop Viganò's statement than in the latest missive from the Bishops' Conference about the dignity of work. Are we supposed to think that this interest is misplaced?

By that time 'team Francis' had already moved on to a kind of damage-limitation which, instead of trying to distract attention from Archbishop Viganò, focused it on what they hoped would prove to be his weaknesses. This, too, has proved a failure, however. Few people had heard of Viganò before his statement, and no-one has anything invested in his personal reputation or political associations. They just want to know if what he says is true.

The attempted character-assassination of Viganò himself increasingly strikes observers as an example of the whistle-blower suppression strategy which is very much part of the problem Viganò has been trying to expose. What we would expect from an abusive cabal is demands for silence and submission, angry denunciations of those who ask questions, and downplaying of the seriousness of accusations. What do we find? Well, it has been quite a sight on Twitter to see Massimo Faggioli, Austen Ivereigh and others have to insist repeatedly that they weren't really playing down the seriousness of the systematic sexual abuse of seminarians: cases which range from seduction to rape. If you have to keep saying that kind of thing, it's a sign that your public relations strategy isn't working.

And it really isn't working. We can see that in relation to two important constituencies: the American Catholic bishops, and mainstream conservative American Catholic commentators. Both are more or less closely connected to the Church as an institution, and depend for their positions and future prospects upon the favour of their hierarchical superiors, as well, or more, than upon their popularity with ordinary Catholics. This makes their defection from reflexive defence of the Pope, or at least silence, very significant.

LifeSiteNews has a list of bishops calling for an investigation of Vigano's allegations. There are a few non-Americans, but the rest are from the US. To date it includes twenty-nine American bishops, not counting the non-resident Cardinal Burke. The United States Conference is a big one, but twenty-nine bishops is a lot of bishops. They have got to the important point where there is some safety in numbers. I fancy that these bishops are going to find life a bit easier than their colleagues in the coming months when they meet the faithful and ask for money. The process is far from over, and their numbers will grow.

What I mean by 'mainstream' conservative Catholic commentators are those who have been defensive of the Pope, or at least silent, on the major issues of controversy up to the McCarrick/ Pennsylvania Grand Jury/ Viganò tipping-point, and have or have had 'centrist' platforms such as Patheos and Aleteia.

One example is Fr Dwight Longenecker. His approach to the problems raised by Amoris laetitia is a good example of how things used to be. He had clearly decided that direct criticism of Pope Francis' theology was too hot a potato, so instead he criticised it indirectly, by saying that things which people concluded from papal statements were making his life as a priest more difficult. This was, of course, a fair point in itself. (Like me, his first reaction was to attempt a completely orthodox reading of the text.)

Now, however, those old restraints have been thrown off. In his post about why it was a mistake for the Pope to remain silent about the Viganò accusations, Fr Longnecker is moved to say that this silence 'makes his showy advocacy of victims look like a cheap publicity stunt' and is 'revealing him to be a hypocrite'. I beg your pardon, Fr?

We move into different territory with Simcha Fisher. Over the years Fisher has been a ferocious critic of the pro-life movement, alongside her friend Mark Shea, which has put her at odds with many of the people most worried by the direction of Pope Francis' papacy. But in the last week or so she has written a couple of blistering posts about the situation: posts which are also, I must say, extremely interesting. She writes:

I have a number of friends who have escaped abusive marriages. They tell me that Pope Francis is sounding more and more like the men who abused them. He's sounding like the men who hid that abuse from the world, who taught their victims to blame themselves, who used spiritual pressure to persuade them and their families that it would actually be wrong, sinful, to defend themselves.

I think Fisher is exactly right. We can't tell from his words and actions that Pope Francis has personally carried out sexual abuse–something no-one is suggesting–but they do fit the pattern of behaviour abusers use to maintain their power. He seems to have sunk into an abusive modus operandi.

Other people who come into this same category include the radio host Patrick Madrid (listen to his recording here For example). Raymond Arroyo of EWTN swallowed the 'red pill' a while ago.

Now Mark Shea, still writing on Patheos, is still echoing the attacks on Viganò served up by John Allen and others. Jimmy Akin appears to be maintaining a grave-like silence on the subject. That is what one would expect. But a lot of their erstwhile colleagues are heading for the lifeboats on the good ship Francis.

There is a third constituency, moreover, which Team Francis seems to be losing, which may end up being more significant than any other. This is American Attorneys General. I have already mentioned the Grand Jury report into clerical abuse in Pennsylvania; this and other revelations have prompted the Attorney General in one US state after another to announce some kind of investigation of the dioceses in their states: there are now seven such processes beginning. These investigations may have the right to demand documents and take witness testimony under oath; even if they have lower levels of formal power, they could dig out and put together a great deal of information currently buried or scattered, and they will certainly stimulate new witnesses to come forward. Whereas in the past such investigations might have looked to many Catholics in public life and to Catholic voters as attacks on the Church, now they are being widely welcomed as ways to overcome bishops' lack of accountability. That means that they will probably happen.

If they happen, they are bound to produce more embarrassing material for the hierarchy. Each one will pile up pressure for resignations and a clearing of the Augean stables which many seminaries seem to have become. Each one will give the basic clerical-abuse story a new lease of life.

What is Team Francis going to do about this? It seems their latest idea is to spread the blame.

There is, of course, some truth in this. But blame is not a finite resource. Including earlier Popes in causing the problem does not absolve Pope Francis from making things worse, if that is what he has done, and it makes his refusal to speak about it even more seriously wrong.

It seems now that a lot of resistance over the years, even by good bishops and priests, to dealing in an open and just way to the abuse crisis, has been motivated by the worry that if one scandal came out it would precipitate the exposure of another and another, in a situation where the problem was so pervasive, and so deeply rooted, that the exposure of a great part of it was just too terrifying to contemplate. It would do too much damage to the Church's reputation and institutions. It seems that many good bishops and other sincere Catholics in the know thought, ten or twenty years ago, that by not washing the dirty linen in public they could gradually weed out the problems and put thing right. They must by now realise that they have failed, and that there is no prospect, certainly under Pope Francis in his current mood, that real progress can be made in this way. The only way things are going to improve is by an indescribably painful process of public exposure. It follows that good people should stop trying to prevent that from happening.

If Team Francis agrees, even if only for partisan reasons, and looks forward to the exposure of more and more disedifying information about the corruption of the Church since Vatican II and perhaps earlier, than the game really is up. We can look forward to a decade or more of scandalous revelations, and the predictable short-term negative outcomes of those revelations for the Church's ability to preach the Gospel effectively. In the end, however, it will be better than having these secret sins eating away at the heart of the Church: harming children, corrupting seminarians, distorting the Church's preaching, distorting the choice of bishops, cardinals, and popes, and always threatening to come out anyway.

Yes, let it all come out, even if some of the abusers turn out to be people we like and have trusted. As St Catherine of Siena said:

“We've had enough exhortations to be silent. Cry out with a thousand tongues – I see the world is rotten because of silence.”

Published with permission from the LMS Chairman blog.