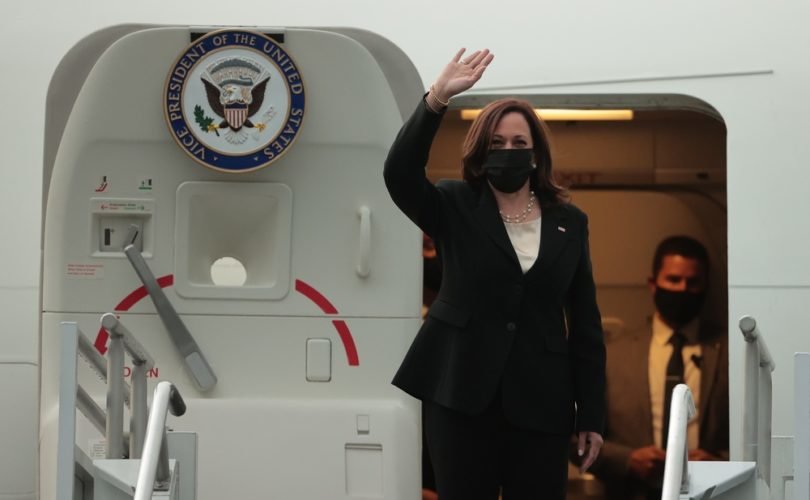 June 11, 2021 (LifeSiteNews) – Thank you very much for your invitation to participate in this panel on the imminent visit of Vice President Kamala Harris to Guatemala.

Special thanks to CEDECON and the Guatemalan Chamber of Journalism for sponsoring this important event at a time when democracy, the rule of law, and freedom of expression for journalists are going through a period of great fragility throughout the world.

We are living in turbulent times. The COVID pandemic, born in the militarized laboratories of China that has devastated the economies and health systems worldwide; the more than contentious election of Joe Biden and Kamala Harris; the information monopoly, exercised by a few American companies: all this has created a truly historic moment, what in the United States we call a “perfect storm” for political and social change, not only in the United States but throughout the world.

For Guatemala, the change in the United States government will bring about changes in immigration policy that my colleague Alfonso Aguilar will explain in more detail.

I would like to focus on sharing information about the political and social ideology represented by the administration of Joe Biden and Kamala Harris that will allow you to contextualize and better understand the political purposes of the diplomatic measures and the bilateral agreements that will be proposed by the vice president during her visit to Guatemala.

I am going to be very direct with you: Vice President Kamala Harris and President Joe Biden represent the extreme left of the United States.

Kamala Harris’s legal and political record speaks for itself.

From 2011 to 2017 Kamala Harris was attorney general of the state of California, where she stood out for her progressive trajectory and for her heavy hand against her political enemies. One particular case is striking. In 2015, a young reporter investigating the illicit sale of aborted baby organs was prosecuted by Harris in a disproportionate and unprecedented legal manner. The prosecutor had received and would receive significant donations and support from these abortion organizations, for which many would accuse her of manipulating the law to promote ideological and political ends.

Likewise, during her tenure as federal senator for the state of California (from 2017 to 2021), Senator Harris would come to be named by the nonpartisan organization GovTrack.org as the most leftist senator of the 100 federal senators. Notably, Senator Harris would continue her custom of using her political office to attack her ideological enemies.

In one particular case, during Federal Judge Brian Buescher's confirmation process, Senator Harris criticized the judge's Catholic faith, questioning his impartiality as a jurist merely on the grounds of his religious beliefs. Harris and several other senators of the extreme left mounted a fierce opposition to any jurist who was part of the Catholic Church and gave any sign of respecting a morality based on principles of faith. Senator Harris was also one of the top senators who attempted to destroy the reputations of current Supreme Court Justices Brett Kavanaugh, Neil Gorsuch, and Amy Barret in a failed attempt to torpedo their nominations to the high court.

In the legal field, Kamala Harris has supported and been one of the main promoters of the effort to increase the number of judges on the Supreme Court of the United States. This issue is very important because it represents one of the most important balance of power mechanisms of the current U.S. system of government.

Although most conservative American jurists would advocate for a more limited and deferential judiciary toward the legislative power, only the most radical actors would advocate for an increase in judges to change the ideological makeup of the Supreme Court. But this is precisely what Kamala Harris and President Joe Biden have proposed through legislation introduced by their supporters in the Senate and through their executive order of April this year in which a legal commission is officially launched that proposes this radical change.

It is ironic that part of Kamala Harris’s diplomatic effort during her visit to Guatemala is to supposedly reinforce judicial independence when in the United States leftists work aggressively to neutralize and punish a Supreme Court whose independence they see as detrimental to their ideological ends.

In comments to the press about her visit to Guatemala, the spokesperson for Kamala Harris reported that the goal of the visit to Guatemala will be to strengthen bilateral and diplomatic relations between the two countries. “The objective is to continue where President Obama had left the relationship between the two countries,” a member of the administration told CNN.

The problem for Guatemala is that this means a return to the politics of former ambassador Todd Robinson, who was too frank in his remarks when he said that “On the priority list, the issue of sovereignty is last.”

Certainly this arrogance will come wrapped in a more moderate language during this diplomatic visit, but it is more than likely that all the international aid offered by the current government of the United States will be conditioned on a series of political and ideological objectives that are very contrary to the opinion of the citizens of Guatemala. In fact, two of the many executive orders issued by President Biden require that all foreign aid processed by the State Department, USAID, and the other agencies of the United States government must include an abortion promotion approach (misleadingly called “reproductive rights”) and the promotion of special rights for LGBT people that go against the family made up of a father and a mother.

The controversial Dr. Anthony Fauci, who is currently embroiled in a major scandal over his role in mismanaging the pandemic, communicated in one of his first acts as President Biden's medical adviser that, and I quote:

It will be our policy to support the sexual and reproductive health and reproductive rights of women and girls in the United States, as well as globally. To that end, President Biden will revoke the Mexico City Policy in the coming days, as part of his broader commitment to protect women's health and promote gender equality at home and around the world.

As many of you know, the Mexico City Policy prohibits U.S. funding for abortion abroad. The vast majority of American citizens viewed this pro-life policy favorably. Under former President Donald Trump, this non-interventionist policy expanded; the Biden and Harris administration eliminated it.

On issues related to gender, President Biden's administration issued a very important memorandum addressed to the directors of all state agencies which, among other things, requires three points:

As you can see, the policy of ex-ambassador Todd Robinson returns within the Trojan horse of foreign aid from the United States in the Biden-Harris administration. Don't be surprised when the Biden-Harris administration conditions the provision of medical resources to combat the COVID pandemic in exchange for legalizing abortion and same-sex “marriage.”

The Guatemalan people have every right to debate these controversial social issues without the coercion of the United States or any other international organization. Accepting the interference of other states, rather than strengthening the rule of law and democracy, weakens them and causes the type of social ruptures that have devastated countries such as Chile, Argentina, Colombia, and even the United States itself.

One last note, although my career and experience have focused on social and human rights issues, I want to make a small comment on the issue of climate change and the eradication of poverty. Undoubtedly, the issue of caring for our natural resources and the environment, as well as the issue of eliminating extreme poverty, is an issue that should concern us.

Unfortunately, the trajectory of the American extreme left, which is represented by Vice President Harris and President Biden is one of political manipulation of the issue to gain political power.

In the state of California, where the vice president spent most of her political and legal career – and which represents her global vision on these issues – environmental and property redistribution policies have led to a massive exodus of people and capital. Not a day goes by that large companies and large segments of American industry do not flee from the state of California and its nefarious policies. Sadly, these policies are the same that they intend to export through their power of diplomacy.

Democracy requires that the people exercise their sovereign power in accordance with the rule of law and that the press be free to express its opinion and disseminate its opinion without censorship. Unfortunately my reading of the current government of the United States is pessimistic in the short term. Sovereign countries like Guatemala and their political representatives will have to stand firm if they wish to avoid the siren song of Kamala Harris’s diplomacy. In the long term, the citizens of Guatemala, free and sovereign, will thank you.