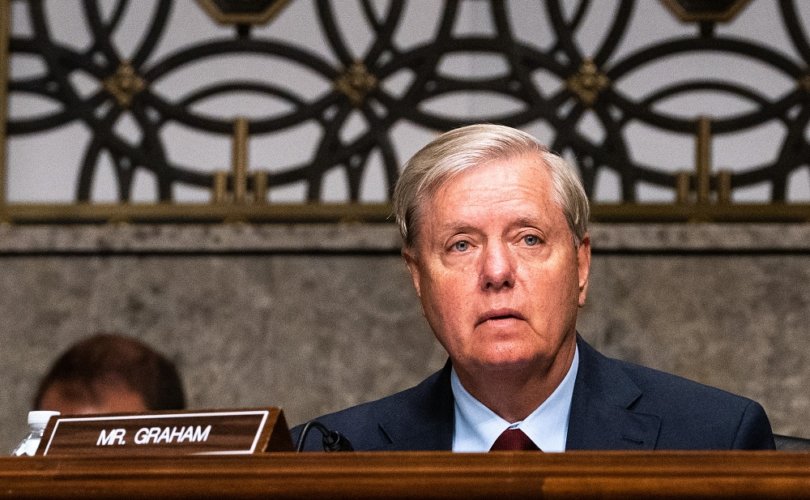 (Fr. Michael P. Orsi) — The expression, “Politics is the art of compromise,” has to be one of the most popular and enduring clichés.

We generally consider compromise a positive thing, a matter of (to use another cliché) “give and take,” the willingness to settle a disagreement by accepting at least part of an opposing argument or demand.

Compromise is often seen as the essence of democracy, the way that groups with competing interests coexist in society, the “modus vivendi” of our constitutional republic.

But is compromise always good?

Since the Supreme Court vitiated the Roe v. Wade decision, restoring to the states their authority to regulate abortion, fights over protecting or ending life in the womb have taken on a new intensity.

The so-called “Women’s Health Protection Act,” an effort to codify abortion rights nationally, was passed by the Democrat-controlled House of Representatives in July. This would turn Roe v. Wade into federal law, thus circumventing the Court’s decision.

As described by the pro-abortion group, Act for Women, “WHPA would create a statutory right for health care providers to provide abortion care, and a corresponding right for their patients to receive that care, free from medically unnecessary restrictions that single out abortion and impede access.”

That means no limits on abortions, regardless of when, where or why they’re performed.

Now, South Carolina Republican Senator Lindsey Graham has introduced a counter-measure. His cumbersomely titled “Protecting Pain-Capable Unborn Children from Late-Term Abortions Act,” would permit abortion only up to 15 weeks into a pregnancy.

Graham sees this as a compromise. In his view, it preserves unborn human life (at least some unborn human life), and it would bring the U.S. into alignment with most other nations, which cap abortion at 12 to 15 weeks.

He also sees a political advantage. “I’m pro-life, even in an election year,” he told Shannon Bream of Fox News. “I am confident the American people would accept a national ban on abortion at 15 weeks … and to those who suggest that being pro-life is losing politics, I reject that.”

The point has been raised that more than 90 percent of abortions occur before 12 weeks, so the number of additional abortions Graham’s bill would allow is relatively small. Still (considering the difficulty of determining exactly when conception occurs), we’re talking about children up to as much as four months in development.

Graham has put this forward as a bipartisan measure, suggesting it will allow the country to move beyond all the contentiousness over abortion — to unite.

Morally, can we make such a compromise? Around what would we be uniting?

I maintain that we would be uniting around evil. Children would still be killed. The only compromise would be on the very pro-life principles Graham says he defends.

Practically speaking, what seems like a short-term win would prove a long-term defeat. The Left never compromises, at least not for very long. Abortion is so fundamental a part of the world-changing agenda of progressivism that we can expect ongoing demands for the full expression of “women’s rights,” no matter what legislation is passed.

Fifteen weeks would become nine months. And since out-and-out infanticide is already being discussed, it wouldn’t be long before nine months is extended to after birth.

Compromise is an appealing, almost seductive, idea that attaches to a broad range of issues. For example, the “Respect for Marriage Act” was passed by the House, but is being held back from Senate consideration until after the upcoming election. Politicians (of both parties) realize that this dangerous measure, which codifies so-called “same-sex marriage,” is enormously controversial.

The bill would make it a crime for anyone to refuse to accommodate these unnatural relationships. By federal law, no vender — wedding photographer, caterer, florist, or whoever — could decline to service “same-sex weddings.” Not even the Knights of Columbus could deny the “happy couple” use of their hall.

Religious conscience would offer no protection. This legislation is a vicious assault on the First Amendment.

I have been assured by a certain political official, however, that I shouldn’t worry. The bill will be “tweaked” before the Senate votes.

“Tweaked,” of course, is another word for compromise.

There is no compromising with evil. On basic moral issues like abortion and “same-sex marriage,” Lindsey Graham’s hope for bipartisanship is a pipe dream.