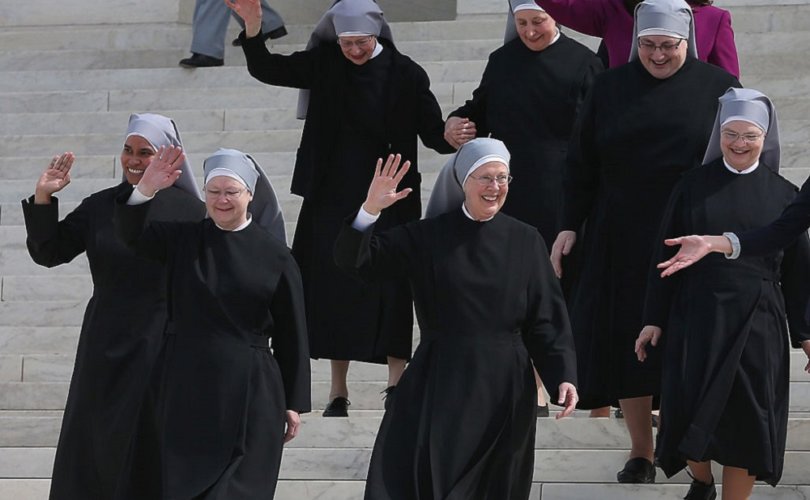 Little Sisters of the poor at the Supreme Court in 2016.Mark Wilson / Getty Images

July 23, 2020 (LifeSiteNews) — The war on goodness has been declared.  Goodness, what civilizes our humanity, which otherwise tends to barbarity, is under siege and is in real danger of being overwhelmed by economic and ideological interests that aspire to eliminate any barriers in their path to total license.

The latest and most shocking example of the dangerous times in which we are living has been the all-out effort to force the Little Sisters of the Poor to kowtow to the fanatical interpretation of Barack Obama’s Affordable Care Act (ACA) and submit to dispensing contraceptives and abortifacients, which contravene their convictions, their beliefs, and their statutes.

The ACA specifically exempted churches (that was a former battle), but not “faith-based ministries.” Consequently, religious nonprofit organizations, such as the Little Sisters of the Poor, were to be fined if they did not comply with the law.

On October 6, 2017, the Department of Health and Human Services under Republican leadership updated the religious exemption to protect religious nonprofit organizations. The State of Pennsylvania, in the grip of the ideology of Planned Parenthood and at the behest of Big Pharma, asked a federal judge, Wendy Beetlestone, to issue an injunction to neutralize the exemption, ultimately ordering the Little Sisters to pay a penalty of tens of millions of dollars. At the same time, Pennsylvania proceeded to sue the federal government, alleging that the exemption violated the Constitution, federal anti-discrimination law, and the Administrative Procedure Act (APA).

The absurdity of this attack upon the Little Sisters, an order of nuns who give gratuitous care to 13,000 of the elderly poor in 31 countries, including in 23 houses in the United States, can only be explained by a hatred of this kind of noble and selfless service.

This past July 8, 2020, the United States Supreme Court ruled on the side of reason, deciding that HHS has the authority to allow exemptions. Thus, the Little Sisters are for now safe from a fine that would have wiped out an organization that has done its wonderful work since 1839 entirely by gifts and donations.

What is grave is that the decision simply allows HHS to make the exception. It does not in fact free religious institutions from the encroachment of the dictatorship of anti-life regulations. With a change of government, Democrats will waive the exceptions, and all religious institutions will be liable once again for fines of millions of dollars if they adhere to their pro-life convictions. The left has the goal of eliminating all of these “annoying” pro-life organizations, and the battle will continue to rage.

The Little Sisters of the Poor was founded in France in 1839 by a saintly nun by the name of Jeanne Jugan, convinced by her Catholic faith that the love of Jesus for the poor must be imitated by His followers. She raised up homes for the elderly by begging in the style of St. Francis of Assisi, and quantities of young women followed her loving and dynamic lead. Based on her sanctity and the miracles attributed to her, Pope Benedict XVI declared Jeanne a saint in 2009.

All Christians must be aware that the anti-life left is not content to be in favor of abortion, euthanasia for the elderly or incurable, and transgender operations for leftists themselves. They are bent on imposing these with taxpayer money upon the entire country, and on the world through the United Nations. Life in the European Union has lost the battle, as we can see by the laws being imposed in Europe. Heroic lawyers, judges, congressmen, and funders, supported by our pro-life President Trump, are resisting these decivilizing forces in the United States of America. The future of the nation depends upon their success.