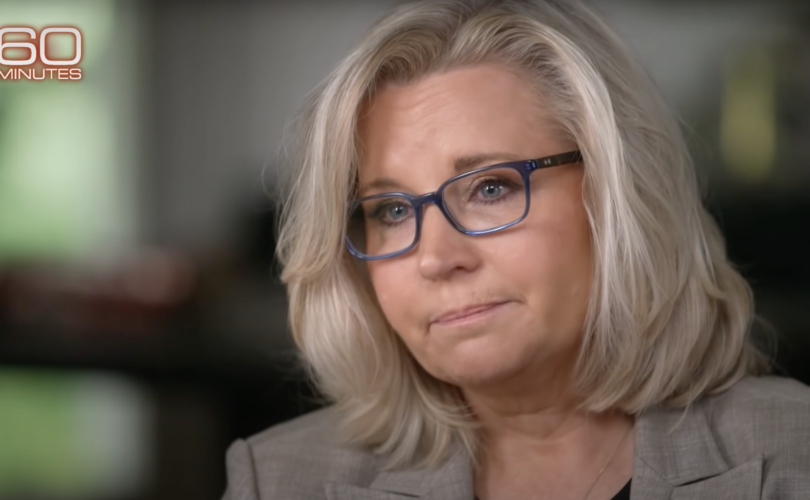 (LifeSiteNews) — Sources have indicated that, in the final stretch toward the August 16th primary for Wyoming’s lone seat in the U.S. House of Representatives, Liz Cheney knew she was going to lose.

Though surely difficult to accept, it still should’ve been easy for her to gauge why: After voting to impeach President Donald Trump just days before he was scheduled to leave office in early 2021, the Congresswoman watched her stock – already having fallen – begin to plunge among the conservative base of the GOP, now licking its chops to kick her out of the House. But rather than employ a strategy of damage control in the ensuing months, Cheney opted not only to ride in the sinking establishment ship, but to nail her colors to the mast and charge toward whatever iceberg she could find.

The result was a categorical rebuke from her constituents in the form of a 37-point loss to a Trump-backed opponent, and a stinging conclusion to a once promising career on Capitol Hill that saw Cheney lose (1) her seat in Congress, and (2) a generations-old presence in government shared between one small group of unduly influential families.

Because, come January 3rd, not a single member from any of those families will find themselves in a true position of power within the United States – and not even an 11th hour commercial starring former U.S. Vice President Dick Cheney (the outgoing Congresswoman’s father) donning a cowboy hat and grumbling vexedly into the camera could prevent that from happening.

But that’s certainly not to trivialize the gravity of such a unique moment in modern American history; merely seven years ago, the idea that an era was fast approaching wherein no person named Cheney, Bush, Clinton, or even Kennedy would be in a capacity to craft, or at very least affect, policy, let alone lead an agency, state, or the nation itself, was just about unthinkable.

Conversely, the idea that a bombastic, multi-billionaire business magnate known for his combover, shimmering skyscrapers, and made-for-TV catchphrase (“You’re Fired”) would be the one responsible for inflicting such damage upon some of America’s longest enduring  political dynasties in such rapid succession sounded like something out of a wishfully written storybook.

And yet, here we are, with Liz Cheney, in many ways the last of her kind, riding off into the sunset, back to Wyoming (or, in all likelihood, somewhere in the DC Metro area, since she never really lived there in the first place).

But she’s not alone.

George P. Bush, the son of former Florida Governor Jeb Bush, grandson of President George H.W. Bush, and nephew of President George W. Bush, saw his own political career come to a screeching halt earlier this summer, marking what may well be the end of yet another dynasty that dates back to 1952.

But even so, the younger Bush’s fall from grace was a decidedly different one from Cheney’s.

By most every measure, George P. was a fresh alternative to the stale Bush brand whose steady rise in Texas politics rightly earned him the oft-overused designation of “rising star” in Republican circles. In addition to his relative youth, he brought a unique new voice to the arena due, in part, to his Hispanic heritage (his mother, Columba, immigrated to the United States from Mexico) and his decade in uniformed service (he attained the rank of Lieutenant in the U.S. Navy Reserve) made him an attractive choice for future candidate recruitment purposes.

After serving as deputy finance chairman for the state GOP, he was elected Land Commissioner in 2014, winning a second term in 2018, and leaving the door wide open to whatever future ambitions may await. Bush even had the political foresight to buck the family trend by openly supporting and campaigning for Donald Trump in both 2016 and 2020, keeping the ire of MAGA Republicans mostly at bay.

But by joining the crowded 2022 primary to challenge incumbent Texas Attorney General Ken Paxton, George P. Bush saw his star, once rising, suddenly fall: After advancing to a one-on-one runoff with Paxton in June where he made voter fraud and finishing construction of the border wall top components of his platform, the former president, who reportedly referred to George P. as “my Bush,” ultimately backed the incumbent, with Bush garnering only 32% of the final vote – losing by a near-identical margin as Liz Cheney did just two months later.

This, however, was not the only notable Bush loss in recent memory: Pierce Bush, George P.’s first cousin, placed third in the primary for Texas’s 22nd congressional district in 2020, also.

And, of course – lest we forget – Jeb (exclamation point).

Not even the Kennedys – perhaps the closest thing America has ever had to a “royal family,” and far more universally popular than the Bushes or Cheneys ever were – have managed to weather the anti-dynasty storm.

The first sign of things to come for the Hyannis Port clan arrived when Ted Kennedy Jr. – nephew of the 35th president and son of Massachusetts’s U.S. Senator from 1962 until his death in 2009 – opted against a run for an opening in the Senate left by John Kerry, who resigned in 2013 to serve as Secretary of State during Obama’s second term.

Generally considered a safe bet for the seat (if he wanted it), Kennedy (eventually) set his sights far lower, settling for two terms as a State Senator in Connecticut, where Article I of the Constitution dictates he would’ve had to switch residency from had he run for the Massachusetts seat (where he also owned a home) instead. He vacated the post in 2019.

Next to fall was Chris Kennedy, son of the late U.S. Attorney General Robert F. Kennedy, who placed third in the Democratic primary for governor of Illinois in 2018 after initially leading in polls and outpacing his opponents in fundraising. He was defeated by what many observers consider a potentially on-the-rise political dynasty: J.B. Pritzker, the billionaire investor and heir to the Hyatt Hotel fortune, ultimately won the nomination and the governorship; his sister, Penny, served as Secretary of Commerce in the Obama administration.

But perhaps the most earth-shattering Kennedy loss of the last several years occurred when Joe Kennedy, a grandson of Bobby’s and Chris’s nephew, became the first in his family to ever lose an election in Kennedy country itself, Massachusetts.

Having served four terms in the U.S. House of Representatives, Kennedy, who delivered the response to President Trump’s State of the Union address in 2018 in what was widely viewed as the soft launch for a future campaign, turned heads across the political spectrum when he mounted a primary challenge to incumbent Democrat U.S. Senator Ed Markey – by all accounts a septuagenarian establishment bore, particularly when matched against the optimism and promise of a 39-year-old Kennedy on the homiest of home turfs – in 2020.

Entering the race as the favorite thanks to lineage alone, voters quickly found that Kennedy’s greatest weakness was his inability to muster a cogent rationale for his entry into the race, and the truth was, beyond fulfilling a family legacy, he didn’t have one. This didn’t exactly play well in a climate marked by anti-dynasty fervor, on the left as much as the right, and Democratic primary voters handed him a stunning double-digit defeat against Markey, who managed to somehow inexplicably rebrand himself as a progressive stalwart who had the energy of the progressive movement (along with the endorsements of AOC and Elizabeth Warren, among others) behind him.

In fact, the only Kennedy who has managed to land a job in such a climate as unfavorable to the familiar as this one is Caroline, the daughter of JFK, who served as Obama’s Ambassador to Japan from 2013 to 2017 and just became the new Ambassador to Australia, having easily won Senate confirmation by voice vote back on May 5. That said, it’s worth noting that this Kennedy, who lobbied for a vacant Senate seat in New York in 2009 which she did not get, seems to have only found success in government jobs that (1) require presidential appointment, and (2) stipulate that she live and work outside of the country.

And yet, with all of these dismal tales of fantastic dynastic collapses, what would any analysis of the desperate state of these withering political bloodlines be without at least a mention of Hillary Rodham Clinton, who took the sense of entitlement derived from a mere name to extraordinary new heights and, in doing so, suffered what may well have been the single most embarrassing, personally-defeating, and thoroughly satisfying comeuppance in American political history.

By any account, and most certainly in hindsight, her still-fascinating loss in 2016 should be unanimously recognized the “shot heard ‘round the world” when evaluating the fall of politics as a family business and the rejection of dynasties by both micro and macro swaths of the American electorate, particularly within the last decade. Had Trump not absolutely devoured the former First Lady and Secretary of State in the manner he did, we would not be having this conversation right now.

The (at best) waning influence of America’s four families – each of which enjoyed a disproportionate amount of power over public discourse and policy, often for decades or even generations at a time – could be a positive or a negative thing for our country; it really depends on who you ask, but you may be surprised to find that there’s more room for bipartisan consensus on such a subject than one may think at a time of such social polarization.

There may well be just as many Democrats who are sick and tired of the Clintons as there are Republicans who don’t have the stomach for third Bush era – recent results, both in primaries and general elections, suggest that this is, indeed, the case, at least for now.

What remains to be seen, however, is whether, with the back-to-back falls of the Clintons, the Kennedys, the Bushes, and the Cheneys, the American people have learned an important, withstanding lesson about giving too much power to too few people for far too long, or whether – in politics and maybe even beyond – the promise offered by potential future dynasties outweighs the past desire to avert those power structures, proving that people really just wanted something new instead of something different.

Only time can tell. Let’s just hope nobody reverts to their baser instincts, because you never know when names like “Hillary” and “Liz” may pop on a ballot all over again …