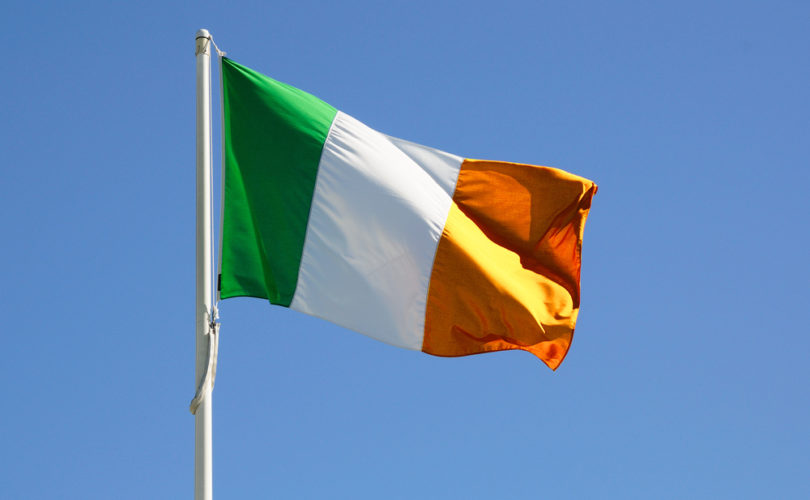 June 4, 2018 (The Bridgehead) – In the months leading up to the abortion referendum on May 25, one of the most tireless pro-life activists in the Republic of Ireland was Tim Jackson, a young man who quit his job to work fulltime to save the 8th Amendment. For weeks, he led the Vote No Roadshow right across Ireland, and my colleagues and I witnessed firsthand his passion and dedication to saving the lives of pre-born babies – and the love that Tim received from the army of activists that he led out onto the streets each day.

There is nothing Tim is not willing to do for the pro-life cause – he launched a hunger strike to force the committee considering the removal of the 8th Amendment to view a video of an abortion procedure before they made any decision. He brilliantly confronted Health Minister Simon Harris – who ran for public office as a pro-lifer – at a press conference where Harris intended to promote abortion, asking whether he supported killing innocent human beings – and whether he'd considering repealing the right to life for politicians, as well. The night before the referendum, he was still at the Life House Office – the headquarters of the Save the 8th Campaign – organizing last-minute activism for the next day, so tired he could barely stand. On the day of the referendum, as we drove to the airport to fly home from Dublin, he was sending out messages to pro-lifers urging them to find “No” voters and get them to the polls.

And like all the Irish activists who poured their heart and soul out to save the 8th Amendment, Tim was heartbroken by the result. Today, I saw that he had posted his thoughts on Facebook and fired him a message to ask if I could publish them here. With his permission, here are his thoughts on Ireland's decision to bring abortion on demand to the Emerald Isle:

A nation has voted to kill its children. The Ireland of St. Patrick, O'Connell, Pearse and Plunkett was sacked on May 25th as the sovereign people turned persecutor with the stroke of a pencil. The carefully crafted Constitution was also destroyed by inserting a fundamental right to kill, whilst celebrations that followed were as tasteless as they were cruel. Who among the cheering fathomed the darkness of the deed? Who else could celebrate a nation choosing to kill its own children but a propagandised and vacuous generation, bereft of love for country or feeling for the innocent to be slaughtered. Is there a more treasonous deed than this?

In times of persecution, famine and grinding poverty, the Irish were a resilient people, clinging to faith, hope and love with a lion-hearted defiance. Children were blessings, welcomed and sacrificed for, proof that there was a future despite mortal dangers and hardship. Now, babies of burden, they are threatening and therefore disposable, to be sacrificed if chosen on the idol altars of self-fulfilment and pleasure.

The underlying obstacle to abortion in this country was not the 8th Amendment. It was the spirit of the Irish people expressed so beautifully in the Preamble of the Constitution, affirming a willing devotion to the goodness of Christ and a sure sense of justice, purpose and integrity. As the bright flame of Christ was extinguished in soul after soul, it was inevitable that evil would envelope the land. The ship is sinking, the passengers asleep, and everywhere “the ceremony of innocence is drowned.” Nihilism reigns. Christ is mocked. And Barabbas is free.

The level of irrationality was astounding: incessant appeals to equality, compassion and care were enough to convince the masses that this murder most foul was not glaringly discriminatory, barbaric and inhumane, but actually progressive. Little thought was given to a proper application of human rights, with a right to kill sought and sanctioned by popular demand.

But this will not be the last word. Whilst the deconstruction of the island of saints and scholars is nearing completion, the architects in their haste have forgotten to ask: who will inherit the land – is it those who kill their young or those who welcome each as gift?

I know the answer, many know the Truth, but the pain of stamping on the faces of Irish saints, martyrs, patriots and children is too much to witness. The land that kept the flame of western civilization alive on Skellig Michael, in Glendalough and Clonmacnoise has become a savage parody of nobler days gone by. Exiled and dejected, it is to the empty tomb that we turn again. He is Risen and with us, and we will not forget.

With men like Tim Jackson to fight for her, we can all have hope for Ireland. Her children could not ask for a better champion.