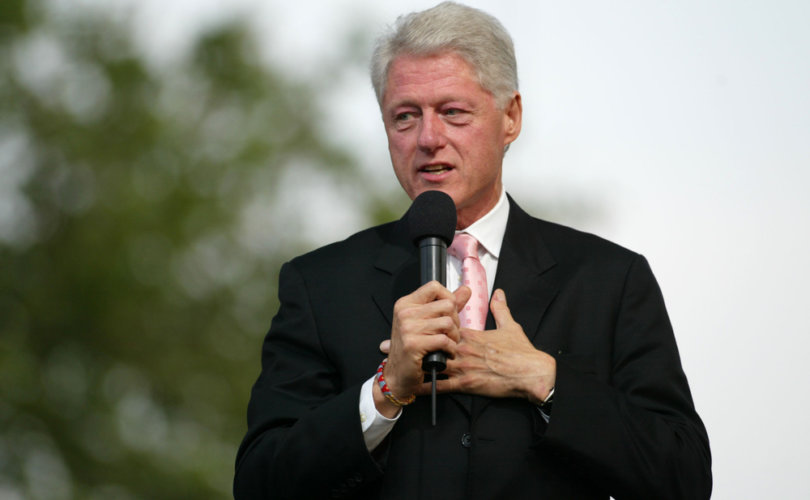 Former President Clinton’s record is one of scandal, immorality and support for the destruction of innocent human life.Anthony Correia / Shutterstock.com

April 15, 2016 (Cardinal Newman Society) — Loyola Marymount University’s choice to honor disgraced, pro-abortion former President Bill Clinton as its spring 2016 commencement speaker on May 7 is a new low in the University’s repeated betrayal of its Catholic mission. The scandal deserves the outrage of faithful Catholics everywhere, most especially those families who rely on LMU to provide the Catholic education that the University holds itself out as providing.

Former President Clinton is an extremely poor choice for honor and presents a very bad moral example to LMU’s students. LMU President Dr. Timothy Snyder touted Clinton in the commencement speaker announcement as “one of the great statesmen of our time.” “His commitment to improving the lives of other people, during and beyond his career in U.S. politics, embodies the ethos of becoming women and men with and for others. President Clinton will inspire our graduates as they seek to lead lives of meaning, purpose, and global impact,” Snyder continued. But President Clinton’s record is one of scandal, immorality and support for the destruction of innocent human life. And his Clinton Foundation continues to partner with and fund some of the largest organizations around the world dedicated to snuffing out babies in the womb — such as Planned Parenthood.

President Clinton was impeached by the U.S. House of Representatives for perjury and obstruction of justice. He violated his oath of marriage and disgraced his office by engaging in an adulterous, sexual relationship with a young White House intern, then sought to cover up his behavior. He worked to ensure legal abortion, permitted abortions on U.S. military bases, sought taxpayer funding for abortions, and even used his veto to protect the barbaric practice of killing babies who are partially born. Since leaving the White House, he has expressed strong support for same-sex marriage and worked to overturn marriage laws.

This Catholic university’s deliberate choice to honor former President Clinton is a scandal to the faithful and betrays the Church. The affront is all the greater, as Clinton is in the midst of an active presidential campaign to elect his wife Hillary, who is an even more vigorous proponent of abortion and same-sex marriage. In this context, there can be no separation of former President Clinton from his wife’s presidential race, and the University’s choice for commencement speaker will reasonably be perceived as a partisan, political act.

According to the tired pattern of many wayward Catholic universities, we expect LMU to resort to a spurious defense of academic freedom and free speech, as if there is some pretense that the University is subject to an external censoring authority in the selection of commencement speakers. Precisely what makes the University’s choice so offensive is the fact that the choice is entirely free and deliberate.

A commencement address bears no resemblance to a serious lecture or other opportunity for reasoned dialogue. Moreover, there is ample evidence that opponents of Catholic moral beliefs, which former President Clinton certainly is, enjoy an abundance of freedom at LMU; it is the faithful Catholics at the University, according to the complaints by many LMU faculty and alumni, who suffer from discrimination and hostility.

We call on the leaders at LMU to rescind this invitation to President Clinton, to a conversion of heart and mind, and to a renewed dedication to the mission of Catholic education. This begins with sincere efforts to teach and not oppose Catholic teaching, both in the classroom and by the University’s public witness.