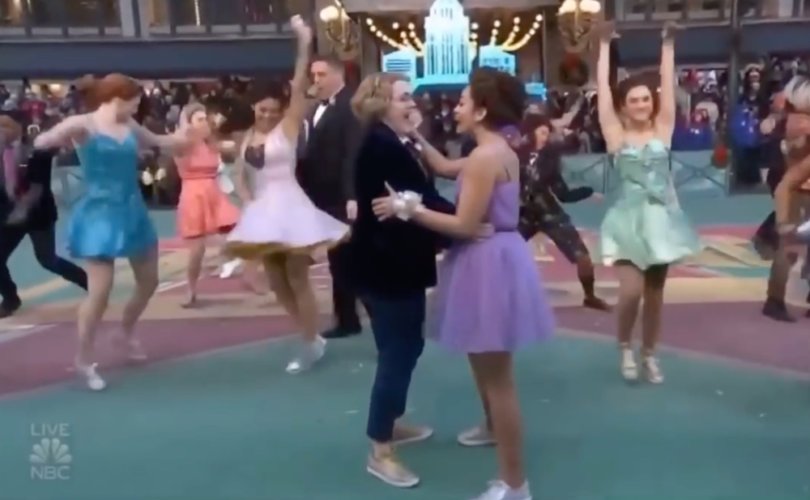 The female dancers moments before the lesbian kiss at Macy's Thanksgiving parade, Nov. 22, 2018.

November 21, 2018 (LifeSiteNews) – On Thanksgiving morning at 9:00 am, we turned on the TV, eager to see the Ohio State marching band in the Macy’s Thanksgiving Day parade. The famous all-brass stars of Big 10 football games were scheduled to be the leading band in the heartwarming procession down Central Park West to 34th Street.

But of course, we weren’t allowed to enjoy this moment before the incessant homosexual agenda was thrust into America’s face.

The cast of the hit Broadway musical “The Prom” performed in the first few minutes of the broadcast, smilingly introduced by NBC’s Hoda Kotb as the story of a teen girl whose high school would rather cancel prom than let her take a girlfriend to the dance. In the scene, the female performers held hands—one in a tuxedo and the other in a dress —  and the closing touch was their lesbian kiss.

And of course, possibly millions of American children are watching, and the producers of the parade and the program know this. This offense, this corruption is deliberate as the procession toward normalizing decadence marches on.

How many times have you heard activists scoff, denying there’s a “gay agenda”?

“The Prom” tells the story of a teen girl who is kicked out of her home because she’s a homosexual. She lives with her grandmother and finds a girlfriend. These currently-identifying-lesbians just want to go to the prom together, but a horrible, bigoted woman in their town, the PTA president,  would rather cancel prom that let these teens be “who they are.”

Except of course that this narrative is a lie. God never makes any human to engage in what He has called an “abomination,” and always shows a way out for those who seek His loving, merciful transformation from lives of sin to lives of sanity and virtue.

His design for human sexuality and marriage is beautiful and should be celebrated as a tremendous blessing on Thanksgiving. But instead, even this traditional icon of Americana, the Macy’s Thanksgiving Parade, is being co-opted by whitewashed depravity.

The musical is a smash in New York, which seems to be falling for The Prom’s own bigotry. Christians are a popular target and so the show features a finger-pointing song called “Love Thy Neighbor.”

A review of the show called it a “delightful pro-lesbian musical.” These are New York values, and apparently, those of NBC and Macy’s as well.

One friend, a former “gay” man, emailed many of us his reaction: “Thank you Macy's…I can't even allow my kids to watch the Thanksgiving Day parade because the musical ‘Prom’ features a lesbian kiss 20 minutes into the broadcast!”

I long for the respect of youthful innocence that was once a pretty reliable standard for public broadcasts and parades. We have never been a perfect nation, but now we must monitor every influence on children, even within our own homes.

This agenda is like an airborne infection that’s suddenly everywhere. From “LGBT” affirming church youth groups, to “gay”-affirming anti-bullying school lessons, to rainbow “pride” apparel sold at Target and Walmart during the spring and summer, to the obligatory pro-homosexual article in the daily newspaper, to disturbed transvestites reading to preschoolers in libraries. It seems to be critically important to stick it to our children, all in the name of phony “tolerance” and “acceptance,” embracing sins leading to personal disaster, societal destruction and spiritual death.

On Thanksgiving, I am tremendously grateful to know the Lord and I feel a deep and lasting joy in my soul at His goodness and blessings. My cup really is overflowing.

Still, I am grieved for America and all the lost people, especially the young. I mourn the simple sweetness of mom/dad families and uncomplicated friendships, of holidays that cultivated wholesome childhood unmarred by the shadow of hateful, sexual fascism. Despite the victory that is in Jesus Christ and our ultimate destiny, before that glorious appearing, the night is coming.

Things are about to get much worse. Here’s another example, as Satan transforms himself into an angel of light, even with smiling affirmation of celebrities and all the brilliance of Broadway.

But there is opportunity in darkness. We can still call it what it is and shine our brightest light.

Hold your children close, teach them Who is really the One from Whom all blessings flow, and let’s do what we can to make a difference right now.

And do not shop at Macy’s this Christmas season.