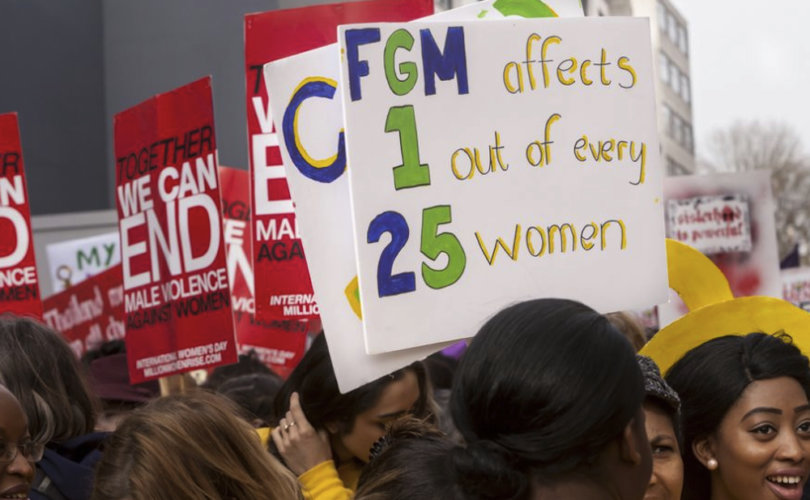 July 26, 2017 (LifeSiteNews) — Female genital mutilation (FGM) defies all standards of humanity and has been condemned as a hideous violation of human rights by the United Nations and the World Health Organization. The Centers for Disease Control estimates that more than 513,000 girls are at risk of FGM in the United States. With the first federal prosecution of FGM mutilators, we are learning more about the breadth and depth of this scourge in America.

In April, the federal government filed its first FGM federal prosecution, charging a Michigan physician and two others with performing FGM on at least six young girls. Yet the grand jury investigation is expanding, with reports that this doctor performed FGM on 100 girls since 2005. With the FBI operating a hotline for FGM victims, the investigation has reached into Chicago, Los Angeles and New York City, according to the doctor’s attorney.

These revelations mirror the same covert pattern and explosion of victims and perpetrators seen in the underground network of human trafficking. Mutilators, like traffickers, operate in secrecy, identifying victims and moving them from state to state in order to effectuate this barbaric criminal assault. The criminal network conspires to link innocent victims with the perpetrators. They operate outside the law, bypassing normal confines of society and trade in hideous violations of human rights.

The trafficking of humans has been described as modern day slavery that robs individuals of freedom and dignity. The FGM trafficking of little girls denies them their freedom to enjoy sexual pleasure as adults and subjects them to a life of physical pain and emotional trauma. FGM is exponentially exploding in the United States because of the growth of migrants and the conspiracy of silence among its traffickers. Human trafficking respects no country or state borders and, like FGM traffickers, exploits legal vulnerabilities.

The state of Maine is considering important legislation (L.D. 745) to criminalize FGM under the state criminal code. Were the legislature not to pass such a statute, Maine risks becoming a safe harbor for mutilators, a destination for their underground trafficking network, instead of a refuge for little girls and other females from this barbaric and inhumane procedure. Unfortunately, Democratic legislators in the Maine House of Representatives have narrowly voted down this bill numerous times.

A final opportunity for these lawmakers to do the right thing by their state, by its girls and women, and by the nation that does not need a safe haven for mutilators and their traffickers could come on August 2. On that day, will Maine stand up against the human traffickers of FGM? If not, the land of scenic harbors, lobsters and panoramic coastland will no longer be known as “Vacationland.” In that case, the “Maine Way” will henceforth be known as the destination of choice for mutilating human traffickers.

Elizabeth Yore is an international child rights advocate and head of the new initiative EndFGMToday.com.