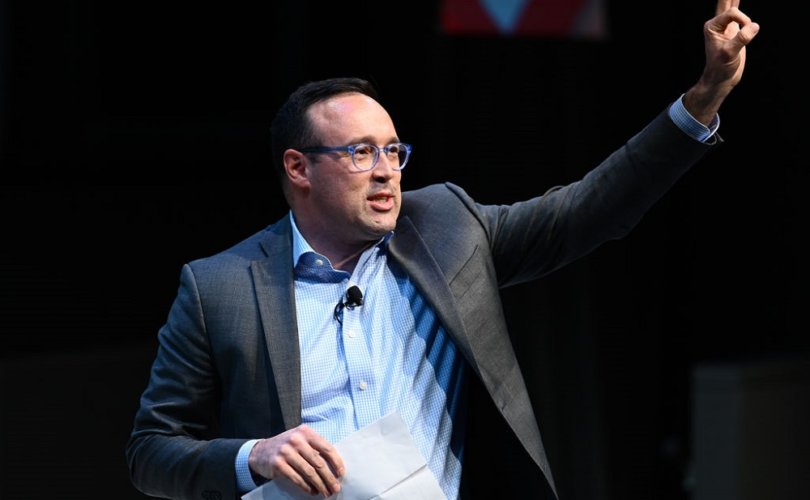 April 8, 2020 (American Thinker) — Chris Cillizza of CNN sent one of the most unintentionally hilarious posts into the Twittersphere when he proudly displayed his new (and ugly) sweater that read “America Needs Journalists.”

Apart from the obvious tone-deafness of the message being sent at a time when most Americans would gladly trade the entire CNN staff for a single grocery store worker, trucker, medic, or just about anything else, this intrepid CNN American hero stumbled upon a sentiment that conservatives can fully get behind. America does need journalists. Too bad we have so few of them.

Irony is never quite as thick as when journalists are preening about themselves, fretting about democracy dying in darkness or patting themselves on the back for their extreme courage and manifest importance. For today's journalists who follow the Acosta/Cillizza model, why report on a story when you can make yourself one?

All Americans would benefit from real information as they try to understand what is going on around them. What they get instead is dangerous politicized poison.

The national media are a fully predictable sideshow at this point. Just imagine what media would think could do the most damage to the president or a Republican, and it is fairly easy to predict their coverage or future emerging stories, such as the rising pressure to swap Joe Biden out with Andrew Cuomo. Poor Joe may be the last person in America to see the train coming to run him over when the media decide that it is suddenly expedient to start reporting on the sexual assault allegations they are blacking out.

As Dennis Prager noted, there is even a political divide on COVID-19 as reflected in the media. He notes that nearly every opinion piece in a liberal outlet has the “unshakable conviction that to prevent mass death, the world's economy must be shut down.” Conservative opinion pieces tend to be far more balanced and understand that, as President Trump observed, the cure can't be worse than the disease.

The disparity on even something like this that should transcend partisan lines is because the media are hoping for the worst-case scenarios. They simply are incapable of looking beyond their goal (and earnest hope) of destroying a Republican president they despise. Sure, they may actually believe what they are spewing forth, but it is because, in the words of a famous movie character, they can't handle the truth.

Nothing stokes their fury more than when Americans see through their charade. That's why they melted down when Senator Marco Rubio tweeted out the relatively obvious fact that the media “can't contain their glee” over the rising number of cases in the U.S.

Here's a free tip for the media: if you don't want to be accused of bursting with glee over America's misfortune, it is generally helpful not to cheer America's misery while doing all in your power to amplify and extend it.

So what would one of these rare creatures whom Cillizza speaks of on his ugly, probably made-in-China sweatshirt actually do?

Here are a few obvious suggestions. For one, a journalist's reporting on the current crisis would show some sense of proportion and would weigh tradeoffs between protecting America's physical and economic health, since they can't be uncoupled. In the long run, economic destruction if allowed to proceed unabated will do far more damage than the virus can ever achieve.

A real journalist wouldn't lap up China's lies and propaganda like a pig eagerly licking up its own vomit. For that matter, a real journalist would be far more interested in how this whole virus kicked off in the first place instead of accepting a lying authoritarian regime's story because it helps their narrative.

They might even be curious about why the regime has been lying so relentlessly and shamelessly while trying to project blame onto the U.S. or about the disheartening habit of critics in the know in China mysteriously disappearing or dying. They would not become willing tools for a dangerous Chinese regime that knows exactly how to play them like a fine Stradivarius.

A real journalist wouldn't deviate between total number and per capita comparisons between nations based on whichever one best fits their agenda du jour.

A real journalist wouldn't create such an unreliable information environment that only the most disconnected people in his country believe a thing the journalists say.

It's a given that all conservatives know that the national press corps is flea dung based on decades of experience. But even my liberal colleagues, despite cheerleading the media's propaganda and anti-Trump efforts, are skeptical of the value of the information being received.

What we have are the media that cried wolf, completely incapable of informing when an actual crisis shows up since their faux outrage is always cranked to max power, even if indeed they wanted to inform. When every national media story can be summed up as “bad orange man must go,” Americans of all stripes will naturally toss every national story into that bucket.

That's one reason why the press conferences are so illuminating and why the media are becoming increasingly desperate to shut them down. As they gain in popularity, more people tune in to see firsthand that the president and Senator Rubio were exactly right. America's journalists are gleeful enemies of the people who wish for the worst for Americans.

I generally believed that the national press corps had hit rock bottom somewhere among Russian Roulette, Brett Kavanaugh, and the Ukrainian Money Club. But that was before COVID-19. They have since dug through rock bottom to new depths. These aren't journalists on display. They are vile anti-American partisan activists, or to put it in terms CNN might understand, an apple is never a banana.

As for our intrepid hero, Cillizza, I suffered through his last eight articles at the time of this writing out of a morbid sense of curiosity to see how a real journalist who wears an ugly sweatshirt writes. Every single article was an attack on the president or another Republican or spun as great news for Democrats, with wishful thinking for a future President Cuomo thrown in for size. That's what it means to be a journalist who “cuts through the political spin,” as his description on CNN heralds.

There are some great journalists in America, the kind of Americans who ask hard and intelligent questions and provide real valuable information. But they all write for conservative outlets like this one, where thinking and applying balance and logic have not been cast into the pit of irrelevancy.

Unfortunately, for the foreseeable future, that is the primary place where real journalism will stay.

This is not an insignificant problem. If our constitutional republic does indeed fall into darkness at some future date, our media will be the prime culprits who buried it there. Through their irresponsible and vile actions, they have pushed our nation to a very dangerous place.

So credit the clueless Cillizza for stumbling upon an inconvenient truth for himself and his colleagues. America needs journalists now more than ever. It's too bad that CNN, the New York Times, the Bezos Post, and the full alphabet soup of media reps have no intention of answering that call.

Fletch Daniels can be found on Twitter at @fletchdaniels.

This article originally appeared at the American Thinker. It is republished here with the author's permission.