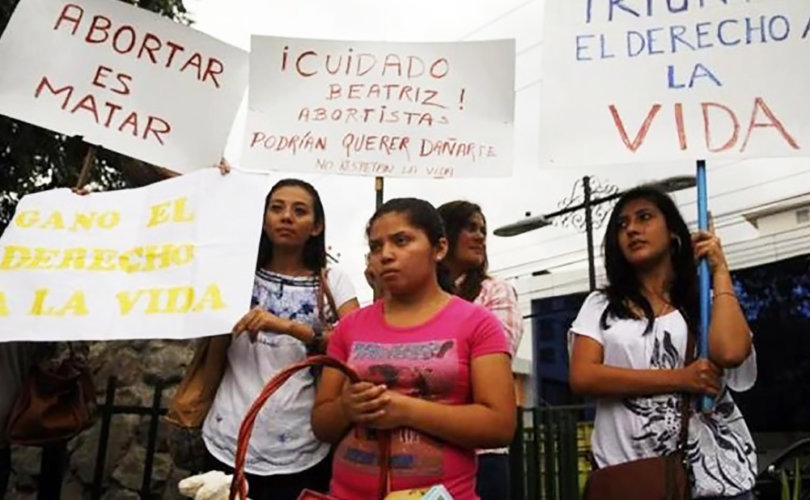 August 7, 2017 (Human Life International) – ‘Fake news.’ The term is everywhere these days. Sometimes it is abused, slapped on as a label for any news report with which a person happens to disagree, or that may even be mildly biased in one direction.

Sadly, however, there are far too many cases where the glove fits. And one of those cases is a recent news report in The Guardian, purporting to ‘expose’ Human Life International’s (HLI) pro-life efforts in El Salvador.

El Salvador is one of the most pro-life countries in the world. A 2014 survey by the Pew Research Center found that only 2% of El Salvadorans believe that abortion is morally acceptable.

In the late 90s, the country passed a total ban on all abortions, with strong public support. A few years later, the ban was added to the country’s Constitution. Thanks to the heroic efforts of local pro-life groups, El Salvador is one of the safest places in the world for unborn human beings.

However, The Guardian is concerned that there remains “formidable” support for the “ruthless” abortion ban, including from a U.S. pro-life group (HLI) that, they report, “has for years directed a steady flow of dollars” to a local pro-life group, Sí a la Vida (Yes to Life), that has supported the ban.

The Guardian story, with its breathless ‘gotcha’ tone, was carefully designed to convey the image of a well-heeled, hostile foreign force swooping in on a vulnerable Central American country to impose an unwanted and dangerous ideology upon its unwitting populace.

In fact, The Guardian is right to be concerned. Even as we speak, there really are wealthy foreign forces – largely U.S. funded – cynically pouring huge sums of foreign money and lobbying resources into the country in a coordinated effort to change its laws in a way that would expose countless thousands of innocent pre-born El Salvadorans to a cruel and violent death [abortion], and to undermine the pro-life values of the local population.

The only thing The Guardian got wrong is who that foreign lobby is.

According to records obtained by the Population Research Institute, the Safe Abortion Action Fund – a fund operated by International Planned Parenthood (IPPF) – donated $150,000 to a pair of El Salvadoran groups who are agitating to lift the abortion ban…in a single year. One of those groups received an additional $43,000 grant that same year. Another half a million dollars was donated by IPPF to a group pushing contraception – including abortifacient forms of contraception – in El Salvador.

I repeat: this is the funding sent to El Salvador from a single foreign pro-abortion group, in a single year. I don’t doubt that further digging would expose hundreds of thousands, if not many millions, more in foreign funding pushing the legalization of abortion.

Sadly, International Planned Parenthood is just one of the many powerful foreign abortion-promoting groups who have placed a target on El Salvador, including Amnesty Internationaland the Center for Reproductive Rights. The fact that most El Salvadorans don’t support their efforts doesn’t faze or concern them; all that matters is exporting their narrow, First World, death-peddling ideology, no matter what.

These groups do not hesitate to use the dirtiest tactics to accomplish their goals, including spreading the most egregious lies. And the Western mainstream media is only too eager to help. For instance, hundreds (if not thousands) of Western media outlets have repeated, without the slightest effort at fact-checking, the absurd claim that El Salvadoran women are routinely jailed for decades for illegal abortions, or, even more outrageously, for suffering “miscarriages.”

In 2007 the New York Times was infamously forced to issue a public correction after it erroneously reported that an El Salvadoran woman was sentenced to 30 years in prison for having an abortion. Court records clearly showed that her baby was born full term, and then murdered after birth.

But that didn’t stop The Guardian from claiming in its recent story that an El Salvadoran woman was jailed last month for 30 years “after suffering a stillbirth.” In fact, local news reports are clear that the baby, born at 32 weeks, was found in the bottom of a septic tank, with feces in its lungs – suggesting that the baby was born alive, and then murdered after birth. The woman was convicted of murdering her newborn – as much a crime in the United States as in El Salvador – and not for suffering a “stillbirth.”

For years now, international pro-abortion groups have been cynically peddling the stories of “Las 17,” 17 El Salvadoran women who they claim were jailed for decades for suffering “miscarriages.” Meanwhile, publicly available evidence, including graphic photographic evidence (WARNING: graphic photos), clearly reveal that the women were found guilty of infanticide, after their babies were brutally killed – stabbed, drowned, asphyxiated – after being born alive.

It would be impossible to respond to each of the misrepresentations and lies in The Guardian’s article within this column. The claim, for instance, that women can’t get medical help for ectopic pregnancies in El Salvador ignores clear Catholic teaching – which informs the abortion ban in this overwhelmingly Catholic country – that doctors can licitly pursue treatments to save the life of the mother, even if the treatment might unintentionally result in the death of her unborn baby. The law also clearly permits such treatments.

The Guardian also didn’t think to mention that the HLI affiliate in El Salvador, Sí a la Vida, they so demonize, doesn’t just oppose making it easier to kill unborn babies, but they also run a home for unwed mothers who are victims of abuse, and have personally helped 5,500 women choose life for their unborn babies.

It would be funny, were it not so tragic, that The Guardian exerted its energies on “exposing” a single pro-life organization’s extremely modest efforts to support a single El Salvadoran pro-life group, while turning a blind eye to the concerted campaign being waged by some of the wealthiest and most powerful foreign NGOs in the world to champion an unpopular change in El Salvador’s laws.

In the face of this overwhelming foreign campaign targeting El Salvador’s pro-life laws, laws that are overwhelmingly supported by grassroots El Salvadorans, HLI’s only regret is that we cannot do more to help our pro-life brothers and sisters in the global South to defend Life.