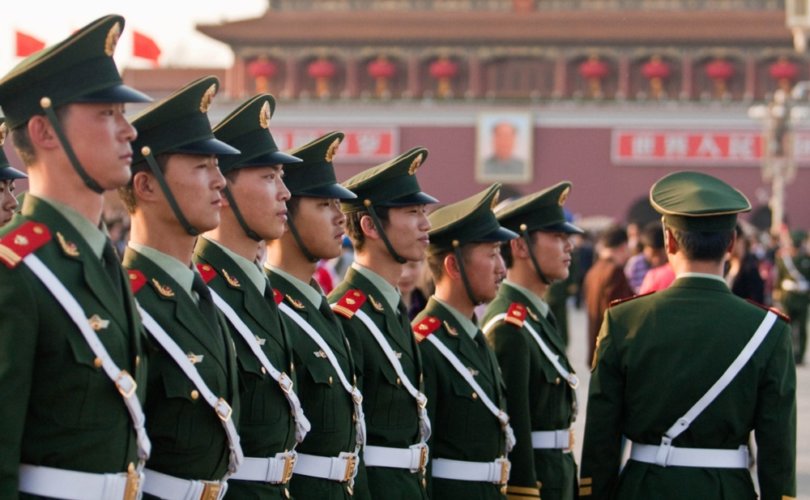 October 8, 2019 (American Thinker) — “The greatest trick the devil ever pulled was convincing the world he didn't exist.”

This idea has often been used in a religious or philosophical sense, but it works equally well applied to geopolitics. The greatest trick communists ever pulled was convincing the world they didn't exist.

The devastation wrought by communists over the last century was possible because they convinced others that they weren't true communists, lulling America into following a naïve and self-destructive policy. Today, regarding China, the same delusion is advanced.

On the one hand, the matter seems straightforward. China is communist. The Chinese have a Central Committee, a Politburo, and a general secretary. China is ruled by the Chinese Communist Party (CCP). The word “Communist” is right there in the name.

And yet, the mainstream media aren't so sure. They regularly downplay the ideological nature of the CCP. They have even taken to advancing the idea that China isn't communist at all, but in fact, capitalist. For instance, last year, the New York Times published an op-ed by a former prime minister of Australia classifying China as “authoritarian capitalism.” The Washington Post followed it up this year with “No, China and the U.S. aren't locked in an ideological battle. Not even close.” The article explained that the CCP is “ideologically bankrupt” and only “nominally Communist” because the Chinese have “embraced capitalism.” More recently, Forbes had an article titled “China's Economic Success Proves the Power of Capitalism.” Forbes explained that the CCP's control over society is just a fading ghost of the past.

There seems to be an assumption underlying these claims that because China is experiencing growth, it cannot be communist. It's an interesting definition, which necessarily precludes anyone worrying about communists. Either someone is communist, poor, and helpless or he's rich, capitalist, and someone we can reason with.

But we know from history that that reasoning isn't valid. In the darkest days of Stalin's rule, complete with purges and collective farming, Russia was strong enough to conquer much of Europe and threaten the existence of the United States. A country can be both communist and strong.

It is true that China has moved away from collective ownership toward private property. However, it is a misunderstanding of communist ideology to understand this as a rejection of communism and an embrace of capitalism. Communists are flexible. Adoption of limited free markets, as long as they are under the control of the CCP, is entirely allowed inside their ideology.

Consider these words of Lenin's hero, Sergey Nechaev, an early Russian revolutionary. He explained that “the revolutionary may and frequently must live within society while pretending to be completely different from what he really is[.]”

The Chinese Politburo knows that it must pretend to be something it's not to fit into the international community and strengthen itself. For now.

Nechaev also wrote, “For [the revolutionary], morality is everything which contributes to the triumph of the revolution.”

There is no absolute truth for the communist. There are only revolutionary truths. If China has to make use of capitalist tools to bring the revolution about, it is China's moral duty.

China's use of capitalism to further long-term communist goals becomes even clearer when understood within historical context.

Would the pundits of today's mainstream media have become giddy explaining that the Bolsheviks were actually crypto-capitalists? Many people, at the time, made claims along those lines. But in retrospect, it's easy to see the absurdity of such thinking.

Renowned Russian historian Edvard Radzinsky explained what was really happening. He called it “Rule Number 1” for communists: “statements by the Party's leaders were only the product of tactical considerations, whereas the real, long-term plans, the Party's strategy, had to remain hidden[.]”

The NEP was just a tactical consideration. It existed solely to serve the long-term plans of the party. Lenin's plan worked brilliantly. The Bolshevik regime was revitalized. Investments flowed in from abroad. Anti-Bolshevik Russians, who had escaped the revolution, were duped into coming back, whereupon the Bolsheviks made use of them, or killed them, or both. The NEP lasted for years, and then Stalin resumed Russia's move toward collectivization. Stalin then introduced his own tactical considerations to pursue hidden long-term plans. He shelved the communist idea of world revolution in favor of “socialism in one country” and patiently waited many years before achieving large territorial gains for Russia and communism.

It is only within this ideological and historical context that China's current policy can be understood.

Last year, amid implementation of China's notorious social credit system, General Secretary Xi Jinping gave an hour-long speech extolling the life of Karl Marx. Xi explained that “the life of Marx is a life of fighting to overthrow the old world and establish a new world.”

Then he elaborated that Marxism is “profound and deep,” a true “scientific theory,” that is “always the guiding thinking for our party and the country. It helps us to know the world, manage the rules, seek the truth, and change the world.” He explicitly attributed China's “unprecedented development miracle” to successful implementation of Marxism.

Perhaps Americans are losing ideologies they once held dear. But to project that same mindset onto the CCP, concluding that the Chinese are ideologically bankrupt, is dangerous indeed.