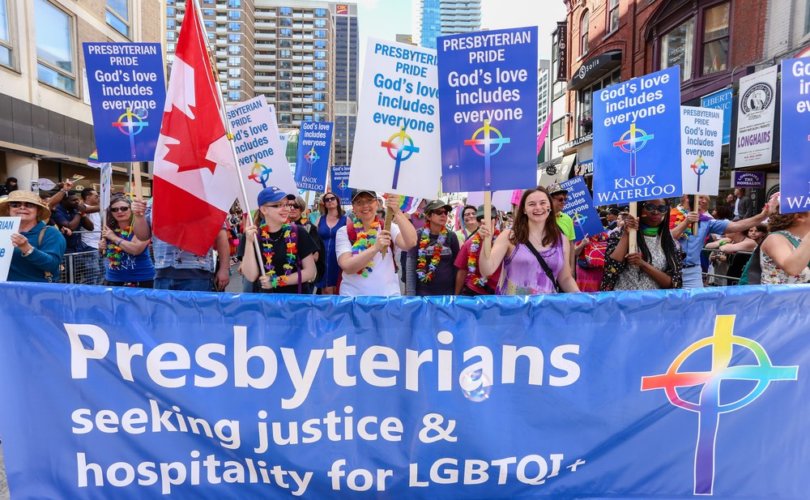 A Presbyterian contingent marches in the Toronto Pride Parade on June 25, 2017.Shutterstock.com

February 27, 2018 (LifeSiteNews) – In the backrooms of the increasingly powerful LGBTQ activist movement, high-fives are no doubt still being exchanged liberally today as they celebrate yet another massive victory over Christianity and traditional values. In a shocking act of apparent complete symbolic prostration, the Presbyterian Church leadership of Canada set up a commission last year and named it the “Rainbow Communion,” with the intent of researching the idea of having the church officially and publicly repent for its sins against the LGBTQ community.

To the average non-Christian the creation of a “Rainbow Communion” might seem on its face to be rather innocuous in nature, but this is only true because people today are so used to seeing the LGBTQ community draping itself in the rainbow flag. But within the Judeo-Christian religious tradition, the rainbow has served as one of its most important and enduring symbols for several thousand years. The rainbow was not an arbitrary symbol chosen by church leaders to celebrate sexual diversity, quite the contrary is true; the rainbow became a symbol for the church because God had flooded the world in order to rid it of the debauched “wickedness of man” whose thoughts were on “evil continually.” According to the Bible, after flooding the world to cleanse it of this evil, the rainbow was decreed by God to be a symbol of a covenant between Himself and man and all livings things that He would never again destroy the world by flood (Genesis 9:8-13). Now intelligent people know that symbols and symbolic acts have real psychological power, and thus this surrendering of God's symbol to the LGBTQ community must be regarded as a shocking prostration to a community that has, for the most part, little love for Christianity, and which at one point, in the guise of the Gay Liberation Front, had vowed to destroy the church completely.

On February 12 of this year, working with information assembled by the Rainbow Communion, the committee's moderator, Reverend Peter Bush, released what he called a “Letter of Repentance to LGBTQI Community.” The letter itself reads like an extreme act of verbal self-flagellation and deprecation. It is full of the most curious “confessions” and, as some have suggested, possibly fabrications as well. For instance, the letter claims that the church has fostered a “homophobic environment” that has made it “an unsafe place for people to name their sexual identity and orientation.” They allege that church members are guilty of “hateful acts” and that “bullying and violence occurs in congregations or in the community with the support of church members.” No evidence of this outrageous claim in the form of police reports or other hard data is offered. The authors go on to claim that the “church shuns people who are not heterosexual.” Long time church elder Don MacMillan rejected this assertion as completely unsubstantiated and contrary to his long experience. Another long time church member, Hugh A.M. Muth, complained that he had never seen homophobia in the church, and resented leadership apologizing for it.

Church leaders then go on to apologize for silencing LGBTQ people, while apparently ignoring the fact that every day LGBTQ activists are busy silencing anybody that disagrees with their worldview, including Christians, by picketing and demanding they be deplatformed or fired from their jobs for speaking out on issues of religious conscience. Calling the church, and its members, hypocrites, the letter then goes on to suggest it will now be accepting the new gender ideology as well. “Families have felt and still feel [the pressure of] the church’s expectations to condemn and reject children, siblings and parents who do not look, act or speak in ways congruent with the restrictive gender definitions of the church and society.” “For the ways our congregations judge and exclude others based on restrictive gender definitions, we are sorry, and we repent.”

The authors of the letter then apologize and condemn the Presbyterian church over and over. The word “repent” is used 11 times in a short two page letter while repeatedly apologizing for hypocrisy and presumably for adhering to the Bible and thus sinning against the LGBTQ community.  By comparison the name of “Jesus” is cited only twice near the end of the letter, where they proclaim “By God’s grace, led by the Holy Spirit, and seeking to be faithful disciples of Jesus Christ we repent and desire to go in a new way.”

There is not a single reference in the letter to the many passages in the Bible that forbid homosexuality; this apparently is of no importance or relevance. If one of the longest held tenets of the Bible can be scrapped so easily, one must wonder if there is anything in the Bible at all that cannot be similarly scrapped? There is also no mention in the letter of what God or Jesus might say to the surrendering of the symbol of His covenant with man to a community that celebrates its “pride” every year with debauched parades in which every form of vice and perversion are displayed in the streets in front of adults and children.

The work of the so-called “Rainbow Communion” would seem to indicate a complete and total surrender of the teachings of the Bible by Presbyterian Church leadership to the political power of the modern LGBTQ movement, which continues its efforts daily to silence and trample all Christian values that disagree with their own. According to the 2001 Canadian Census, over 400,000 Canadians identified as Presbyterian. In 2015 the Church itself listed membership at only 91,000. In another 15 years membership could thus plummet perhaps to as low as 20,000 members nationwide and at that point become largely financially unsustainable. You cannot replenish the ranks of the church by compromising your values and prostrating yourself before people that largely hold your religion in disdain. Compromising Christian beliefs and the core tenets of the Bible in order to appease LGBTQ leadership, will do nothing but undermine the authority of the church and the Word, and probably lead to even deeper losses. The solution to rebuilding the church then is for all Christians, in this time of eroding moral values, to stand strong in their faith and show the world and our membership that we stand for order and balance in a world rapidly losing both.

Laura-Lynn Tyler Thompson is the co-host for the national daily show, The 700 Club Canada.