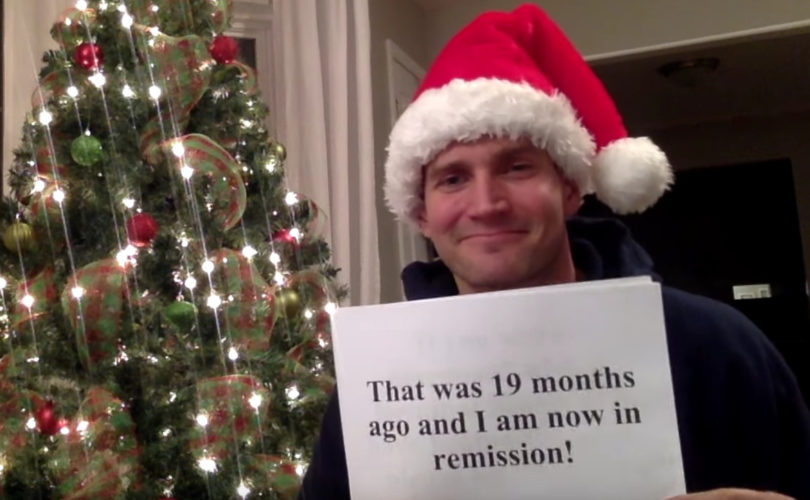 Jan. 19, 2016 (LiveActionNews) — We all know Brittany Maynard’s story by now. The beautiful 29-year-old seemingly had it all, until she was diagnosed with Stage IV glioblastoma multiforme, the deadliest form of brain cancer, and told that she only had months left to live.

Rather than fighting the cancer, or spending her last months cherishing the time she had with her husband and her family, Maynard sought physician-assisted suicide.

On top of her decision, Maynard went on a very public media tour about it, speaking openly about how she moved to Oregon to take advantage of its “death with dignity” laws, which allow assisted suicide. She wanted to see every state make assisted suicide legal. Maynard publicly set a date, and announced to the world that she would end her life — and, as planned, she killed herself on November 1, 2014.

JJ Hanson’s story could not be more different.

Hanson is a former Marine who was also diagnosed with Stage IV glioblastoma multiforme. He, too, was told that he only had four months to live. Unlike Maynard, Hanson chose life. He chose to fight, and got a second opinion— and then a third— until he found a doctor willing to aggressively treat his cancer. Now, 20 months later, he’s in remission, and he’s speaking out in hopes of preventing the passage of any more assisted suicide laws.

At the end of last year, he released a video that aimed to give hope to other people fighting cancer:

This week, he did an interview with New Jersey radio personality Bill Spadea, and he talked about why it’s insulting to people with terminal illnesses to call it “death with dignity” and to advocate for assisted suicide:

I was told you don’t have an option. You can die dignified if you commit suicide. Whoa, wait a second. The whole terminology is flipping on its head. If you give up and you don’t fight, somehow you’re compassionate and dignified. But if you want to fight and you want to live, you lack compassion and dignity. To me it just doesn’t make sense. It’s kind of a reflection of where our society is.

He’s also spoken out about Brittany Maynard before:

“I saw it as a bad example for others who had this form of brain cancer,” Hanson said of Maynard.

… “When you see people choosing not to fight and choosing to go toward the alternative, it removes a large part of the ability to fight against disease because there are fewer people going into clinical trials,” he said.

Brittany Maynard chose not to fight her cancer and chose to commit suicide. And while she tried to claim that it wasn’t suicide — that her death was due to her disease — suicide is exactly what it was. To say it was somehow more dignified than the alternative is not true.

Maggie Karner, another cancer sufferer that spoke out about Maynard’s suicide, pointed out that her father became paralyzed when he was dying, and could do nothing but talk. This led to a greater intimacy than she’d ever before had with her father, and that her family grew closer, learning more about love and sacrifice in the process. Karner also said that they could be part of research trials that could help other people suffering from their disease, even if it was too early to help themselves. Karner died, too, but she fought to the end. That is a courageous and powerful example of living out your final days with dignity.

There’s also a more sinister issue hiding behind assisted suicide, one that both Karner and Hanson voiced. As Karner aptly put it:

I get strength and comfort from the knowledge that nobody is going to give up on me — medically, psychologically or holistically. Right now, I have the firm support of the state and my fellow citizens in my desire to live — no matter the cost or burden.

If that were to change, the tiny knowledge that I might be straining my family, friends, doctors or community resources unnecessarily would be a heavy burden. The constant “option” for suicide would wear at my resolve and I fear, become an unspoken “duty” for me and others.

If assisted suicide becomes an option, then how many people fighting terminal illnesses will also have to fight off the feeling that they’re a burden, and that their life is no longer valuable? These individuals will feel as if they would be causing pain and suffering to their family and their friends.

Or how many will believe that fighting their illness will cost so much more than a one-time cost of the drugs needed to kill themselves? It puts even more pressure and more of a burden on individuals who already have a difficult fight ahead of them.

It’s something that Maynard may have experienced herself — when she announced that she might not go through with her plan to kill herself on November 1— as one of her statements was extremely telling. She said she hoped that her family would still be proud of her if she did go through with physician-assisted suicide. Were there people pressuring her, perhaps even unintentionally? Did she feel an obligation to kill herself, as opposed to it being her own decision? Lord knows that Compassion & Choices (formerly the Hemlock Society) has their own agenda to push, and it’s not “death with dignity” for the terminally ill.

Just because a person is terminally ill, it does not mean they have suddenly been stripped of their human dignity. A person with disabilities or who is bedridden is not less valuable. It’s not incomprehensible that someone with a terminal illness might consider ending their life, but what’s sickening is that the assisted suicide lobby is there to feed into their insecurities, to tell them that their life no longer has dignity or value, and that to continue living would make them a burden on their family, on their medical providers, and on society.

The assisted suicide lobby is there to feed into that person’s worst fear and to encourage their demons. They aren’t there to reassure them, to tell them that their life will always have value and meaning.

JJ Hanson is an inspiration, not just because he survived, but because he chose life. The value and dignity of life does not depend on how long a person lives, or on their quality of life, or on how much they might suffer. All life matters, and no illness can take that away.