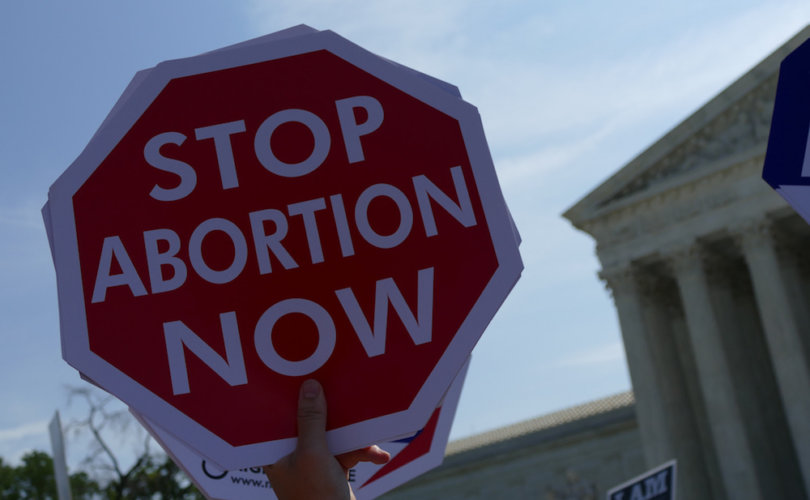 August 17, 2016 (LifeSiteNews) — Last week in The Stream, a colleague of mine wrote an article outlining how Democrat operative Robert Christian is trying to steal the language and even part of the name of my pro-life apostolate, I Am Whole Life, and use it as camouflage for his “Seamless Garment” views. In service of these views, Christian wrote a sneaky endorsement of Hillary Clinton disguised as an objective analysis, which appeared at the Catholic news site Crux.

In that article, John Zmirak also mentioned National Catholic Register columnist Mark Shea — who is aiding and abetting Christian's act of intellectual theft. Mark Shea continually attacks the leaders and stalwarts of the existing pro-life movement and claims that he wishes to replace it with a “Whole Life” movement redefined by leftist Democrats like Mr. Christian.

I founded I Am Whole Life out of a deep experience of grief that shaped my life when I was only 17 years old: the death of my daughter Jessica in a forced abortion that I learned about only post-mortem. The goal of Whole Life is to move the abortion argument out of the sex-based “culture wars” and place it where it belongs: in the realm of human rights. We should talk about abortion in the same breath as genocide, religious persecution, and other examples of violence against the vulnerable. That is why our work at Whole Life has included efforts to save persecuted Nubans in Sudan and Christians in Iraq, and “Imago Dei” missions to the homeless of U.S. cities.

Mark Shea responded to Zmirak's defense of I Am Whole Life (which launched the Whole Life movement in 2007) in a Patheos article that essentially erases me, my pro-life work, and my daughter. (When you're in on a theft, why bother to mention the victim.) In fact, Shea did not even mention I Am Whole Life, but instead wrote a scathing and groundless attack on Dr. Zmirak, which was riddled with provable falsehoods — the same kind of sloppy charges he recklessly and routinely makes against many other pro-lifers as well.

What this boils down to is yet another command to the faithful to use the unborn as human shields for making war on everything else in Church teaching that the Right dislikes. It is a summons to claim that you are defending the unborn while in fact diverting all your real time and energy to making war on the Church whenever she crosses Right Wing Culture of Death Priorities on unjust war, torture, poverty, refugees, gun violence, a living wage, and the death penalty….

Let's go through this point by point and decide what to make of Shea's basic truthfulness as a writer. Keep in mind that Shea has been following and responding to Zmirak's work for years, so he cannot truthfully claim ignorance of any of the following.

At significant cost to his career in conservative journalism, Zmirak opposed the 2003 Iraq War. Zmirak wrote in 2002:

What exactly does the U.S. hope to accomplish by unseating Hussein, and adopting Iraq as the 51st state? To set up a model Arab democracy? Can we manage that? (We had enough trouble holding our own democratic elections in Florida.) To remake the entire region in the image of stridently secularist Turkey, as Norman Podhoretz has modestly proposed? Imagine what that will cost, in money and lives — and remember what happened the last time we tried to save a whole region through the imperial use of force — in Southeast Asia. Friends of Israel — and I count myself one — should remember the fate of our solemnly guaranteed allies in Saigon, the last time thousands of body bags started streaming back to U.S. military airports. We declared victory, and fled. … I pray that we don't have to use that saber — to stick it into the mire of an intractable, almost ungovernable country, in pursuit of aims we haven't clearly thought out, and could probably never achieve.

“No more 'pro-life' excuses for Hiroshima and Nagasaki”

Zmirak has also written extensively and consistently on the need for the U.S. to avoid inflicting civilian casualties — condemning in 2008 and again in 2014 the use of massive bombing against Dresden, Hiroshima, and Nagasaki. As he wrote in a piece called “Killing Women and Children First:”

The atomic blast which resulted killed some 80,000 people almost instantly, and caused the deaths by radiation poisoning and other causes of some 60,000 before year's end. Lingering illnesses would claim many more; according to the city of Hiroshima, the final death toll of the bombing was 237,062.

When the first bombing failed to provoke a Japanese surrender, a second was planned for August 9. After weather conditions forced pilots to skip the initial target city of Kokura, another lone American plane descended on the ancient capital of Japanese Christianity, Nagasaki, and again dropped a single bomb — this one named “Fat Man.” The military targets in the town —major factories — were indeed destroyed. So were 75,000 civilians that day; at least an equal number would die within the year.

It's easy to lose sight of reality, when we're dealing with such numbers. So let's think of it this way: Every child who died from our bombs was as innocent as Anne Frank.

Zmirak has never, anywhere, defended the use of torture by the U.S. government or anyone else. The only article he has written on the subject, in fact, is a scathing satire of the flippant attitude taken by some neoconservatives toward the rights of captured prisoners, which was published at Antiwar.com. In it, Zmirak compared that aspect of the War on Terror to Sauron's cruel mistreatment of captives in The Lord of the Rings:

The Dark Tower's security from the air will be guaranteed by a squadron of specially designed defensive drones or “Nazgul,” which will seek out and destroy any aircraft, bird, or other winged creature that approaches within 1,000 feet of the grim citadel. To foster evacuation in case of disaster, the building will eschew elevators, relying instead on 33 innovative spiral stone staircases that will snake pathlessly around a central “bottomless chasm,” down which intruders or terrorist suspects will be cast after questioning, noted [then Attorney General John] Ashcroft.

The Dark Tower itself will serve primarily as government office-space, containing the New York field headquarters of the Department of Homeland Security, the northeastern divisions of the Federal Bureau of Investigation, the Immigration and Naturalization Service, and the Justice Department – in addition to slave armies of soulless goblins, which government scientists hope to clone and breed in its vast dungeon spaces, as cannon fodder in the War on Terror. Said Mr. Ashcroft at the announcement: “There's nothing in the Constitution protecting the 'rights' of sub-humanoid orcs, crafted by torturing and twisting the genes of hapless enemy prisoners. Or protecting those prisoners, come to think of it.”

While defending the Church's classic teaching that the death penalty first serves the interests of justice, Zmirak has recognized the brokenness of the American legal system on this issue and written:

I agree entirely with death penalty reformers who point to the innocent men executed, the paucity of decent legal representation for the accused, and the racial imbalances among those put to death. If the U.S. were largely to cease employing the death penalty until these outrages are fully addressed, that would mark progress for the sanctity of life because it would be centered on sparing the innocent.

Zmirak has also written on the cruel conditions in American prisons, and the government's failure to address the plague of prison rape, noting that our prison's failure to address means that nearly every prisoner in America, in almost all our prisons, is in fact subject to cruel and unusual punishment that violates the Constitution, the natural law, and any decent human standard of justice.

According to Just Detention International: “Sexual assault behind bars is a widespread human rights crisis in prisons and jails across the U.S. According to the best available research, 20 percent of inmates in men’s prisons are sexually abused at some point during their incarceration. The rate for women’s facilities varies dramatically from one prison to another, with one in four inmates being victimized at the worst institutions.

I find it staggering that Mark Shea has spilled thousands of words denouncing as sinful Lila Rose's and David Daleiden's use of deceptive language to Planned Parenthood, in order to expose the truth about that organization's abortion profiteering. He has warned that accepting such tactics (also used by underground priests such as Edmund Campion and Miguel Pro) threaten to corrupt the Church into a cult of the “noble lie.” Shea has said that it would have been sinful to lie to the Nazis in order to save the life of Anne Frank — quipping that “The issue is not and never has been figuring out how to lie well; the issue is figuring out how to hide your Jews well.”

But Shea is willing to publish professionally damaging, provably false lies about a fellow Catholic in order to win an argument. On the Internet.

Shea pretends that his whole project of attacking pro-lifers is demanded by Catholic social teaching —which he reads very selectively as an endorsement for growing and giving more powers to a hostile, pro-choice government. He accuses those who have dedicated their lives to fighting abortion — Zmirak entered politics at age 11, volunteering for New York's Right to Life Party — of using the unborn as “human shields.” In fact, pro-lifers are willing to serve themselves as human shields, defending the vulnerable against the callous indifference of the Democrat party, pro-choice elites in other parties, and our deepening culture of death. Mark Shea, by contrast, uses a caricature of Catholic social teaching as pretext for expanding our godless, increasingly anti-Christian state. And to do that, he's willing to lie.