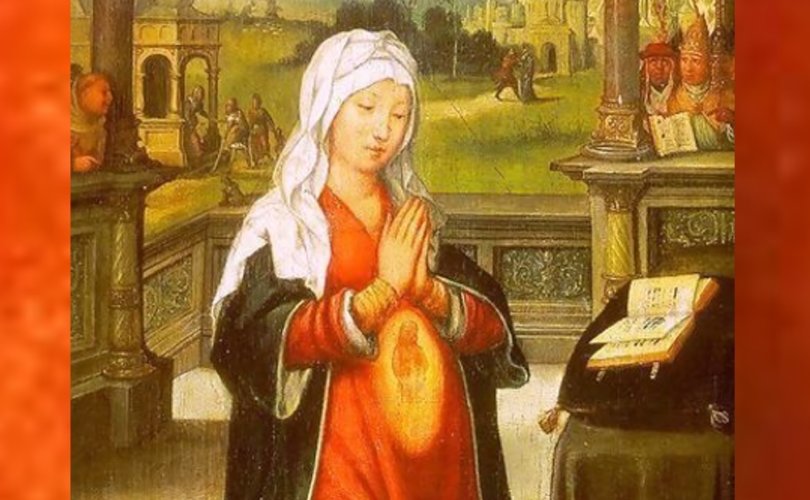 December 8, 2016 (LifeSiteNews) — Catholics finding themselves singing along to the catchy Christmas carol “Mary, Did You Know?” might be shocked to discover that the song actually undermines the truth of the Immaculate Conception.

“Mary, Did You Know,” described as one of the “most loved modern Christmas songs of this century,” was written in 1984 by Mark Lowry, who has described himself as a Fundamentalist Baptist.

Using Bible passages such as “All have sinned and come short of the glory of God” as well as Mary’s exclamation “My spirit rejoices in God my savior,” Baptists hold that Mary was a sinner, just like everyone else.

It is no surprise that this belief shows up in Lowry’s song with the words, “[Mary,] did you know that your Baby Boy has come to make you new? This Child that you delivered will soon deliver you.”

But as a Catholic, I always cringe when I hear that line in what otherwise is a beautiful song, because it dishonors my spiritual mother by saying untrue things about her.

Catholic belief of Mary being created without sin in the womb of her mother St. Anne is founded on Scripture, Sacred Tradition, and reason.

God is Holy. When the time came for the Second Person of the Blessed Trinity to become man, God needed a holy temple through which his beloved son might enter the world. God created Mary to be that holy, spotless, and perfect temple, the first tabernacle, to contain his son and bear him into the world.

The Catechism of the Catholic Church puts it this way: “To become the mother of the Saviour, Mary ‘was enriched by God with gifts appropriate to such a role.’”

When the angel Gabriel, at the moment of the annunciation, salutes Mary as “full of grace,” he is not simply tacking on meaningless verbiage to his greeting, but he is speaking a profound truth about this woman. He is “naming” her as she is seen by God. He is pointing out the spiritual reality of her being.

Mary is “full of grace.”

Following this line of thinking, the Catholic Church holds that Mary was still saved by Christ’s redeeming sacrifice, but she was “redeemed from the moment of her conception” in view of Christ’s sacrifice. God is outside of time, so he can do something like this, if he wants to.

The understanding of Mary being “full of grace” so that she was without any stain of sin, even from the moment of her first beginning, has for centuries been such a large part of Catholic belief that it was defined as dogma — incontrovertibly true — in 1854 by Pope Pius IX.

States the dogma: “The most Blessed Virgin Mary was, from the first moment of her conception, by a singular grace and privilege of almighty God and by virtue of the merits of Jesus Christ, Saviour of the human race, preserved immune from all stain of original sin.”

Catholic teaching is clear that Mary’s holiness from the first instant of her conception “comes wholly from Christ” and not from herself. She is “redeemed” just like everyone else, but in a more exalted fashion, by reason of the merits of her Son, states the Catechism. The immaculate conception is really Jesus’ special way of looking out for his Mom.

States the Catechism: “The Father blessed Mary more than any other created person ‘in Christ with every spiritual blessing in the heavenly places’ and chose her ‘in Christ before the foundation of the world, to be holy and blameless before him in love.’”

Four years after the dogma was decreed Mary appeared to a poor uneducated peasant girl in Lourdes, France, and, when asked her name, responded: “I am the Immaculate Conception.” The girl Bernadette had no idea what this meant and had to repeat the confusing phrase many times so that she would be able to speak it properly to the local priest who had directed the girl to ascertain the apparition’s name.

The ancient Church Fathers have this saying about how what one prays is ultimately what one believes (Lex orandi, lex credendi). It is no stretch to hold that this applies to Christmas carols as well. If Catholic sing songs about a “sinful” Mary, soon they will come to believe it, disdaining the truth of the Immaculate Conception.

Today is the feast day when Catholics honor Our Lady conceived without sin. Let all men and woman of good will hold fast to this great work of God, pondering with wonder the workings of his grace.

“O Mary, conceived without sin, pray for us who have recourse to thee.”