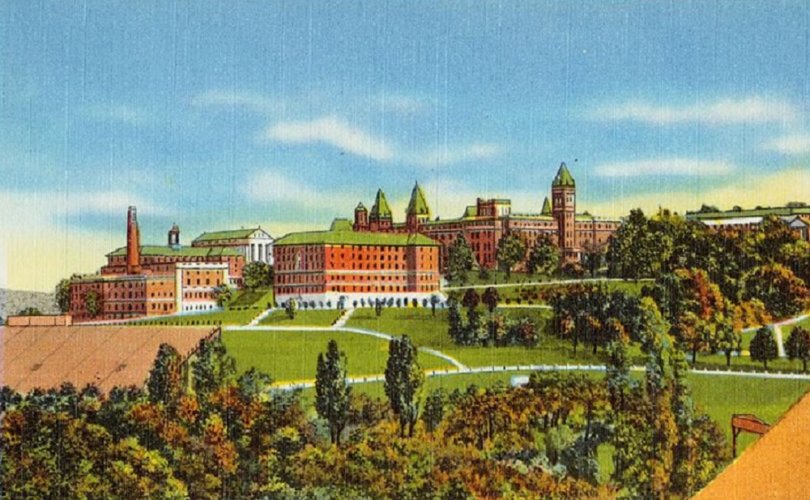 April 6, 2018 (Cardinal Newman Society) – Amid blasphemy by the chair of New Testament studies at the Jesuit College of the Holy Cross in Worcester, Mass., comes real hope – from the courageous student who exposed the scandal, and from Worcester's Bishop Robert McManus who publicly chastised both the College and the professor.

It was student Elinor Reilly (no relation to the Newman Society's president) who brought attention to the writings of Professor Tat-siong Benny Liew in her report in The Fenwick Review, a faithful and conservative voice at Holy Cross.

Liew, she reported, claimed Jesus was a “drag king” with “queer desires.” Liew reportedly theorized that Saint John's references to Jesus and water “speak to Jesus' gender indeterminacy and hence his cross-dressing and other queer desires.”

Jesus washing the apostles' feet, was, according to Liew, “suggestive,” and “even seductive.”

“What I am suggesting is that, when Jesus' body is being penetrated, his thoughts are on his Father. He is, in other words, imagining his passion experience as a (masochistic?) sexual relation with his own Father,” Liew has written.

There are no words, other than asking why this person is entrusted with teaching theology to young people.

I am deeply troubled and concerned to hear that someone who holds an endowed chair in New Testament studies at the College of the Holy Cross has authored such highly offensive and blasphemous notions. Such positions have no place in the biblical scholarship of a professor who teaches at a Catholic college and who, as such, should be supportive of the college's Catholic identity and mission.

The College's president, Father Philip Boroughs, S.J., was yet another defense of the indefensible under the protection of a deeply flawed “academic freedom”:

I know Professor Liew to be a dedicated teacher and an engaged scholar. He is a man of faith, and he and his family are active members of a church community. Academic freedom is one of the hallmarks of a liberal arts education. Scholars in all disciplines are free to inquire, critique, comment, and push boundaries on widely accepted thought. However, I strongly disagree with the interpretation of John's Gospel, as described in the Fenwick Review, and I find it especially offensive in this most sacred of all weeks in the liturgical calendar.

Bishop McManus, to his great credit, would have none of that! He wrote:

Academic freedom certainly plays a critical role in the intellectual life of a Catholic institution of higher learning like Holy Cross. However, how that academic freedom is exercised, particularly in the fields of theology or religious studies, cannot provide cover for blatantly unorthodox teaching. Clearly the biblical conclusions that Professor Liew has reached in his writings are both false and perverse.

… Holy Cross has a duty to, at least, ask Professor Liew if he rejects the biblical positions he penned some 10 years ago or if he supports and defends those positions today. If he disavows them, then he must state so publicly, so as not to create confusion about the nature of Christ. If he does not, then it is my duty as the bishop of Worcester to clearly state that such teaching is a danger to the integrity of the Catholic faith and, in prudence, warn the Catholic faithful committed to my pastoral care that such unorthodox teaching has no place in a Catholic college whose mission is to promote and cultivate the Catholic intellectual tradition.

Published with permission from the Cardinal Newman Society.