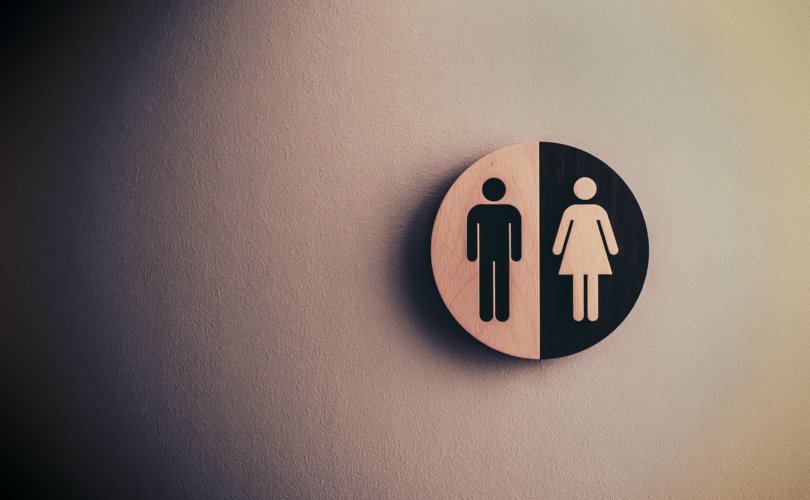 November 20, 2018 (MassResistance) – On November 6, a nightmare happened in Massachusetts. There's no way to whitewash this. Two-thirds of Massachusetts voters voted to keep a lunatic “transgender anti-discrimination” law in place. It's a law that punishes people with fines and even jail time if they refuse to treat mentally dysfunctional men wearing dresses as if they were actual women.

How did this happen? It's the old story of conservative groups trying to use a clever side argument to avoid getting into the real fight. It works for a while, but eventually the Left figures it out – which is what happened here.

It pains us to write this because many good, well-meaning pro-family people put time and effort into this. Unfortunately, they got a lot of bad advice. We need to learn from this.

This was basically a battle between the LGBT lobby and some Massachusetts pro-family groups with fairly deep pockets. MassResistance got involved only near the end, with just a month to go.

Here's what we all saw:

The rallying cry of the LGBT lobby trying to keep the law in place was that this is about “civil rights.” (And they portrayed their opponents as being “against civil rights.”) Using that mantra, they gathered an unbelievably huge list of endorsements from corporations, small businesses, politicians, and other entities. Then they raised an enormous amount of money, nearly $5.7 million, which was about 20 times what the pro-family side raised.

They used that money (plus in-kind donations from ad agencies) to run a very professional, aggressive campaign. It included flooding the airwaves with commercials and going door to door across the state. On top of that, they got huge support through puff-piece coverage from the mainstream media.

The rallying cry of the pro-family groups trying to repeal the law was the well-known “bathroom safety” argument – that in addition to transgenders, this law allows male sexual predators to lurk in women's restrooms to prey on girls and women. This was technically true, but was largely contrived. They also talked about privacy in restrooms and locker rooms. They did NOT address the “civil rights” claim – which gave the LGBT lobby a complete free pass to use it without pushback. Nor did they address the bizarre and delusional nature of transgenderism itself in their arguments, except to say that transgenders “already have good legal protections” and didn't need more.

The pro-family people raised a modest amount of money and got no public endorsements to speak of. They campaigned the best they could, but could not come close to the LGBT lobby's efforts.

About a month before the election, MassResistance activists formed their own “No to 3” ballot committee to campaign on this. They felt strongly that three important points were not being presented to the public: (1) the LGBT movement's “civil rights” argument has no basis whatsoever; (2) that “transgenderism” is actually a mental disorder and a destructive ideology, and (3) this law forces people to accept an absurd lie – men can never become women. Thus, the “yes on 3” people were pushing bizarre lies and an Orwellian mandate on society. In other words: We need to tell the truth about this!

They worked hard, but it was difficult to start from ground zero with a month to go. So they used whatever creative methods they could, such as highway standouts, leafletting, and some public debates. Sadly, the Massachusetts “conservative” news outlets were skittish about deviating from the relatively comfortable “bathroom safety” argument and avoided publicizing our admittedly more inflammatory alternative arguments.

As a result of all this, the people of Massachusetts were given a terribly skewed presentation of the issue. And corporations, politicians, and wealthy liberals were given no strong reasons not to support it.

Over a decade ago when LGBT movement took the “gay marriage” battles into the state legislatures, and later into the federal courts, the major pro-family groups tried a similar strategy. As we reported at the time, they refused to argue that homosexuality was immoral, had terrible health risks, was fraught with addiction and mental health problems, etc.

Instead, they concocted less offensive arguments such as, “Every child needs a father and a mother” and “the word 'marriage' is special” – and used them almost exclusively. It actually worked for a little while. But while technically true, before long they were easily picked apart by the LGBT lobby, and they began their string of wins. Nevertheless, on every level the pro-family lawyers and lobbyists refused to budge from that approach. Without any credible opposing arguments, the “gay marriage” push cruised to victories right up to the US Supreme Court. It was a shameful display of legal malpractice.

Now with the “transgender anti-discrimination” bills the same thing is happening. Our side concocted the “bathroom safety” male predator argument as a way to avoid an uncomfortable battle over LGBT ideology, and still fire up people's emotions. It worked in Houston a few years ago.

But the LGBT lobby has now figured out how to beat it. Their lopsided victory in Massachusetts will likely be repeated everywhere else unless the establishment pro-family groups (and their wealthy donors) are willing to change their tactics.

What do we do now?

One thing we've learned in twenty-five years of fighting the culture wars is that none of us is going to change how other conservative groups do things. It's very different from the Left which is dominated by their internal group-think. And there are a lot of other reasons for that, but that's the way it is.

There are big challenges coming up that we must face. There will be more state and local “transgender anti-discrimination” fights. And with the change in power in the US House of Representatives, look for these horrific laws being proposed on a national level.

So we have to learn from what we see around us and do what's effective. We will continue to do that. That's why MassResistance is here.