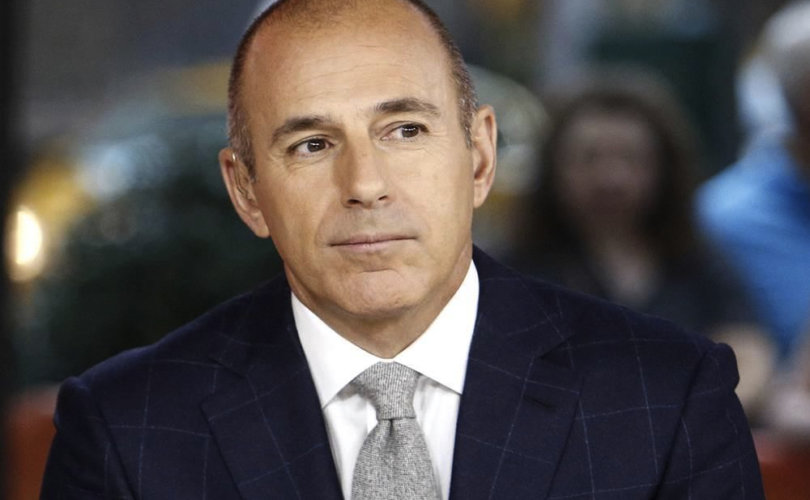 “On Monday night, we received a detailed complaint from a colleague about inappropriate sexual behavior in the workplace by Matt Lauer,” Andrew Lack, chairman of NBC News and MSNBC, said in a statement released Wednesday morning. “As a result, we've decided to terminate his employment. While it is the first complaint about his behavior in the over 20 years he's been at NBC News, we were also presented with reason to believe this may not have been an isolated incident.”

Per The New York Times, the NBC announcement of Lauer’s firing comes less than 36 hours after an unnamed woman and her legal team met with network executives. According to the Times, Lauer came into contact with the woman, who was affiliated with NBC, while he was covering the 2014 Winter Olympics in Sochi, Russia. As of Thursday morning, two more women have stepped forward, at least one of them also a former employee of the network, and accused Lauer of inappropriate sexual behavior.

“Some of what is being said about me is untrue or mischaracterized,” Lauer wrote in a statement, “but there is enough truth in these stories to make me feel embarrassed and ashamed.” He continued by saying: “To the people I have hurt, I am truly sorry. As I am writing this I realize the depth of the damage and disappointment I have left behind at home and at NBC.” Lauer is married with three children.

The claims against Lauer range from lewd comments and text messages to locking his door via button connected to his desk and removing his pants in front of unsuspecting female co-workers. Lauer was applauded by many for his grilling of Bill O’Reilly after similar allegations came out about the then-Fox News host.

Now that interview, two months old, is blindingly hypocritical, as Lauer presses O’Reilly saying, “Think about those women, they came forward and filed complaints about the biggest star at the network they worked at.” That line of questioning did not age well for Lauer. It is clear now more than ever that the same liberal hypocrisy that surrounded Harvey Weinstein in the Hollywood bubble exists in the leftist media bubble as well.

Katherine Blakeman of the National Center on Sexual Exploitation had the following to say to LifeSiteNews on the issue: “Matt Lauer, and the many other men who have allegedly sexually harassed or abused vulnerable women, sat at the highest levels of social influence in our society. They are both products of and producers of our hyper-sexualized culture.”

“In addition to rampant pornography consumption by men,” said Blakeman, “we have television shows that glamorize rape, sexual violence, prostitution, and even incest, such as HBO's “Game of Thrones” and “The Deuce,” as well as Netflix's forthcoming show “Baby,” which will normalize the sex trafficking of teenagers as “prostitution.” The problem resides in the sexualization of our culture, according to Blakeman, and “mainstream entertainment companies like HBO and Netflix must enter a new era of responsibility to stop producing shows with gratuitous imagery of exploiting women.”

The reality is Lauer, who has been on “Today” since 1994, is yet another entertainer who felt he deserved to receive the same level of sexual attention as he does public from the pulpit he occupies. Many of the claims made against him bear a striking resemblance to those levied against now infamous comedian Louis C.K., who had, on multiple occasions, exposed himself and even masturbated in front of disgusted female up-and-coming comics who felt they had to keep quiet or risk their career reporting on a giant in the industry. It is apparent that Lauer leveraged his position of affluence the same way C.K. and so many others in the entertainment complex have.

As Blakeman astutely pointed out, “until we address the cultural influences that normalize male sexual entitlement, we cannot begin to holistically stem this tide of abuses.”  Sadly that tide does not seem to show any signs of slowing down.