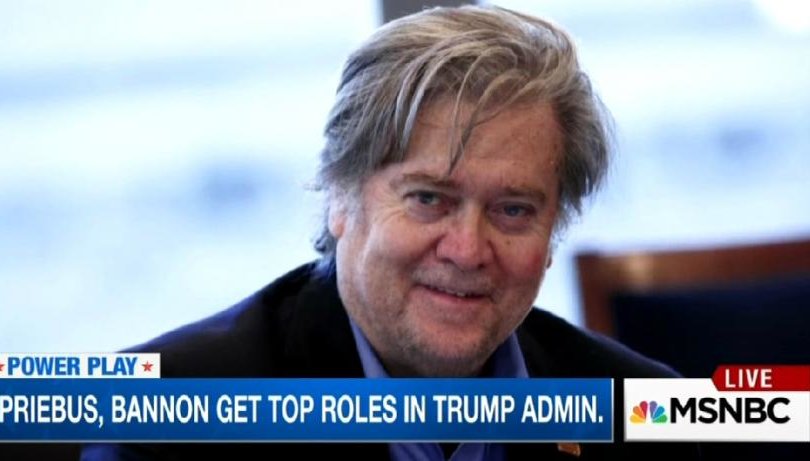 The media protested when President-elect Donald Trump recently chose Steve Bannon, former executive chairman of Breitbart News, as his chief strategist and senior advisor. Among other criticisms of the new appointee, journalists and bloggers took issue with a Breitbart story attacking Planned Parenthood over videos that surfaced last summer – a scandal liberals refused to get upset about.

During his show Monday night, comedian Seth Myers called Bannon a “white nationalist and an anti-Semite” and tried to attack him via Breitbart’s past coverage of Planned Parenthood.

“And just to give you a sense of how extreme Breitbart is, the website … compared Planned Parenthood’s work to the Holocaust,” Myers pushed.

Earlier that day, MSNBC host Tamron Hall made the same connection during her MSNBC show.

“Before joining the campaign in August, Bannon led Breitbart News which has compared Planned Parenthood's work to the Holocaust,” she said.

Of course, Planned Parenthood itself is no fan either of Bannon either:

The Breitbart story that most news outlets cited was written by Milo Yiannopoulos after the Center for Medical Progress (CMP) released videos that exposed the Planned Parenthood’s practice harvesting aborted baby parts.

And that is something the media takes issue with. Not only have they staunchly defended the abortion giant against the videos, but hundreds of media outlets boast a long, friendly history with Planned Parenthood.

For an idea of the videos’ content, here are just a few of the headlines about the CMP footage that the networks refused to investigate:

Since the release of CMP’s first video July 2015, the broadcast networks proved hesitant to publicize the story – and when they did, they refused to even utter the word “baby.”

Two months after the first video’s release, MRC Culture found that ABC, NBC and CBS had aired a mere 0.13% of the CMP footage during their news shows – or 1 minute, 13 seconds of more than 16 hours. And in early October 2015, MRC Culture discovered that the networks spent more time combined airing Cecile Richards’ defense of Planned Parenthood during a congressional hearing than showing the actual videos themselves.

From the beginning, liberal media news outlets raced to defend Planned Parenthood. In the first 9 hours and 30 minutes of news shows broadcast after the story broke, ABC, NBC and CBS, spent only 39 seconds on the first video. It took more than 24 hours before all three covered the story. In the week after the first video, the networks gave a mere 9 minutes and 11 seconds to the story (in contrast, the nets devoted more than three times that to the Susan G. Komen controversy, when the charity temporarily decided to defund the abortion giant).

ABC, NBC and CBS prioritized animals over aborted babies, by covering the shooting of Cecil the lion more in one day than they did these videos in two weeks and in their reporting on birth of the National Zoo’s panda cubs.

Not only that, but also they refused to cover the tens of thousands of Americans speaking out against Planned Parenthood during nationwide rallies held in late August – except as a side note when CBS tried to connect the event to arson.

Citing information from MRC studies, both Sen. Mike Lee (R-UT) and members of Congress led by Rep. Louie Gohmert (R-TX) have slammed the media for their lack of coverage on the videos.

The media similarly stayed silent on the case of Philadelphia abortionist Kermit Gosnell. Gosnell's trial, in which witnesses described baby abortion survivors “swimming” in toilets “to get out,” attracted a scant 12–15 reporters. Only after 56 days, multiple letters from members of the House of Representatives and a public outcry, did all three broadcast networks report on Gosnell.

The media know how to hype outrage – but only when it aligns with their agenda.