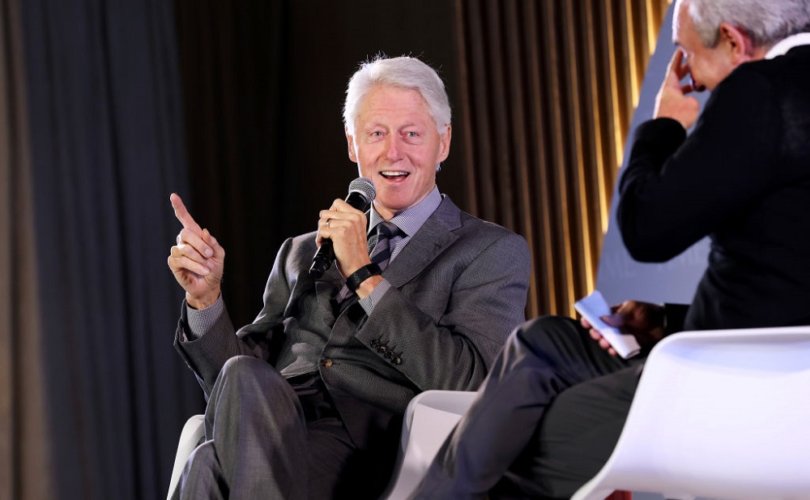 December 6, 2019 (American Thinker) — The press is piling on against the U.K.'s Prince Andrew, who's been probably credibly accused of participating in “suicide” pervert Jeffrey Epstein's sex-with-little-girls operations.

Yes, it's wretched and appalling. It's bad for a royal family that for decades has portrayed itself as the embodiment of middle-class values. This is Shaka Zulu or Genghis Khan territory.

But it's also of limited interest, given that Prince Andrew is not even important in the royal succession lineup, and frankly, who cares what some rich overseas princeling is up to? The media sure didn't, up until now.

There's likely a reason for it — to deflect attention from the growing evidence that Bill, Hillary, and even Chelsea Clinton have had a pretty spectacularly intense association with the very same pervert.

The Daily Mail has been on the job and has found another credible witness, a former contractor of Epstein's at his New Mexico “cowboy village” ranch who says the Clintons jetted in annually on Epstein's Lolita Express and had a grand old time on Epstein's many-camera'ed grounds. Some opening points from the Mail:

And to read the details of the report is enough to give the gross-outs to anyone. Why were the Clintons going to a place Epstein called his “baby-making ranch”? What was that about Epstein having an eight-person “party shower”? Did the Clintons do the “party shower”? Was it on film? How many times? And who else was in the pen with them? What about that party room with the stripper poles? Did the Clintons go there, too? What was the Secret Service thinking, or did Bill bug out again on his Secret Service? And why are taxpayers paying for this farce?

Why again did Epstein have that icky portrait of Bill Clinton wearing a blue dress on his Manhattan mansion wall?

As one of the contractors who witnessed this, Jared Kellogg, told the Mail:

'My contact was Brice, their main concern was that there was no video surveillance on the property at all. I thought this was a simple request, as they wanted surveillance to protect their investment. It's a huge site.

'But what was weird was that the whole time I was on site, Brice would be bragging about how the Clintons would visit, the whole family. Not just Bill, but Bill, his wife, their kid, and they would stay on the ranch itself.

Instead of using an expensive, robust camera system, which used underground cables, he wanted a 'point-to-point wireless fluid mesh design', which means cameras are operating via antenna, and is considerably cheaper.

After Kellogg did an estimate and sent in a plan, he never heard back.

He said: 'They had this huge facility, but it felt like they didn't have the money to do anything. They were trying to find the most cost-effective way to transmit video footage and we had to come up with a point-to-point wireless fluid mesh design because normally we want to trench everything. It saves money as you don't have to build a trench and put in a cable.

Now, arguably, one could argue that the press is saying nothing about this, given that the contractor was a different kind of witness from Virginia Giuffre, the credible young woman who says Epstein trafficked her with Prince Andrew when she was a teenager.

But the Mail slips in something that hasn't appeared significantly in the press at all: that Giuffre also says she saw Bill Clinton at Epstein's pervert haunts being honored by the pedophile himself.

Why aren't the media covering that? Now we have the Clintons pinned at two places — the “cowboy ranch” and the Caribbean pervert island — and no one's saying anything. It's all about Prince Andrew.

Yet Eptein was obsessed with cameras and obviously blackmail. He roped in Prince Andrew. But the real question is to what extent he got the Clintons. With all these new revelations rolling out, why is the press silent?