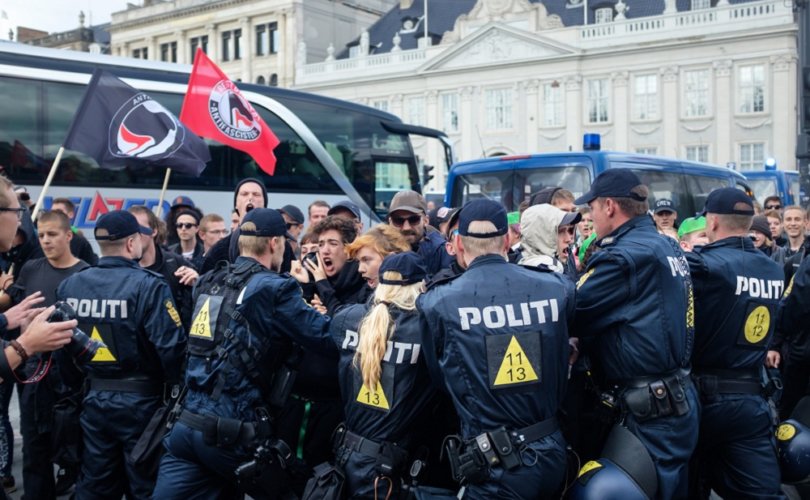 June 17, 2020 (Turning Point Project) — “There are decades where nothing happens, and there are weeks where decades happen.”

So wrote Vladimir Lenin. The Communist Revolution which he engineered did seem to pack many decades of change into a relatively short time. The old tsarist order was quickly overthrown, and, almost overnight, Russia was transformed from a Christian country to an officially atheist state.

The year 2020 may well be one of those times in which decades’ worth of change are compressed into a short time-frame. The Covid-19 pandemic brought with it a great deal of unexpected and unwelcome change. Many of those changes may turn out to be permanent.

What’s more, the economic effects of the epidemic (which have not yet fully unfolded) may be the chief factor in deciding the crucial 2020 election. That election is now shaping up as a contest between two parties with radically different views of life — perhaps not as radically opposed as monarchist Christians and communist revolutionaries, but somewhere in the same vicinity.

Should the party of the liberal-left come to power, the changes we can expect will be almost as sweeping and as swift as those that followed the Bolshevik Revolution in Russia. That’s not an unreasonable prediction. The liberal-leftists of today share many of the same ideological, political, and economic views as the Leninists. For example, even though many on the left claim to believe in God, they are actually functional atheists. They act and legislate as though God does not exist, and they see traditional Christians as a threat to the secular heaven they hope to create on earth.

The leftists in our midst are a dangerous lot. Witness the role that various leftist groups such as Antifa are playing in organizing and encouraging violent riots in dozens of American cities. But even if the worst fears about leftists in power don’t materialize, another danger is close at hand. Even if America’s progressive socialists turn out to be as mild as the Swedish variety, they will — as the ever naïve Swedes have already done — pave the way for an even more dangerous and oppressive ideology — namely, Islam.

Although the left understands that Christianity is a competitor for the hearts and minds of people, it fails to realize that Islam is also. Why is that? Well, primarily because the left seems to have fallen for its own multicultural propaganda. It looks upon Muslims as a victim class which has been held back by capitalism, colonialism, racism, and, of course, “Islamophobia.” Left-liberals may even believe that Islam is a religion of peace which has gotten a bad press. A poll of Democrat voters taken a few years ago revealed that they believed Islam to be no more violent than Christianity. Leftists do, however, understand that Islam is no friend of Christianity. So they believe that they can work together with Islamic groups to achieve mutual goals.

For their part, radical Muslims tend to see leftists as useful idiots. They are willing to play the oppressed victim role that leftists have assigned to them if it will further their own interests. So, it’s not surprising that some of the most radical Democrats in Congress, such as Rashida Tlaib and Ilhan Omar, are also activist Muslims. Likewise, Linda Sasour, who is considered one of the leaders of the Women’s Movement in America, never appears in public without a hijab.

The fact that Sasour, a strong advocate of sharia law, is considered to be a champion of women’s rights reveals a lot about the liberal left’s inability to come to grips with the realities of Islam. So does the fact that Phyllis Chesler, the only prominent feminist who has criticized Islam’s treatment of women, is now shunned by her former feminist colleagues.

Extremist views of the Islamic variety are no bar to moving up the ladder in liberal social and political circles. Take Keith Ellison, for example. He embodies both the extremes of liberalism and the extremes of Islamism. Yet this didn’t prevent him from being elected several times to the House of Representatives, and after that to be named the Deputy Director of the Democratic National Committee.

Currently, Ellison is Attorney General for the State of Minnesota, and, as might be expected, he has had a few things to say about the riots in Minneapolis. Among other things, he has been retweeting theories that white supremacist groups may be responsible for the violence.

Well, actually, there is one, largely white group that is responsible for organizing much of the violence. But it’s mostly made up of left-wing college grads, not right-wing rednecks. But Antifa is not the white group Ellison suspects. In fact, he seems to favor it. Indeed, he once posed with a copy of Antifa: The Anti-Fascist Handbook — today’s equivalent of Mao’s Little Red Book.

Ellison is very much a man of the left. His candidacy for Congress was supported by the Communist Party USA; he praised Fidel Castro and other leftist heroes; and he was a member of the Congressional Progressive Caucus.

On the other hand, his radical Islamist credentials are just as solid. A convert to Islam, Ellison took his oath of office on the Koran at the photo-op re-enactment of his swearing-in ceremony. And he has disparaged moderate Muslims as “Uncle Toms,” which suggests that Ellison himself could, perhaps, be categorized as an immoderate Muslim.

His immoderation is confirmed by looking at the groups he has associated with over the years. He started off as a supporter of Louis Farrakhan’s Nation of Islam. Later, he found it politically expedient to get the endorsement of more “respectable” groups such as the Council on American-Islamic Relations (CAIR), the Islamic Society of North America (ISNA), the Muslim American Society (MAS), and a half-dozen other Muslim Brotherhood-linked groups. Over the years, Ellison has been the keynote speaker or featured speaker at dozens of conventions and conferences sponsored by what one commentator calls “suit-wearing jihadists.”

You can’t very well call Ellison an “infiltrator” of the liberal political establishment. He didn’t make much of an effort to conceal his leftist and Islamist leanings. In fact, he often flaunted them. The Democratic Party knew what it was getting when it appointed him the co-chair of the Democratic National Committee.

Doesn’t that require a security clearance? Well, yes. Did the brothers have one? Well, no. That requirement would have been Islamophobic. Finally, in 2016, in order to keep up appearances, the House Intelligence Committee Democrats requested “Top Secret” clearance for the Awan brothers. Yet the brothers were involved in various forms of financial fraud, and one of them had been twice arrested for public drunkenness. In addition, they had numerous close relatives in Pakistan — which alone would raise red flags in the security clearance process. Despite all this, Wasserman Schultz retained Imran Awan on her staff right up to the moment he was arrested at Dulles Airport for trying to flee the country.

There are numerous other examples of lax security in the government and the military. To name just a few:

In 2008, when Major Stephen Coughlin, the Pentagon’s top authority on Islamic war doctrine, reported on the connection between Islamic law and violence, he was fired at the behest of Hesham Islam, a special assistant to the deputy secretary of defense.

A year later, as if to prove Coughlin’s point, Major Nidal Hasan, who once lectured his colleagues on Islamic law, killed fourteen people at Fort Hood after successfully infiltrating the Army.

One might think that the Army would have tightened up its vetting procedure after that, but one would be wrong. Instead, the military tightened up its Islamophobia watch. One result was the penetration of Pensacola Naval Air Station in 2019 by a jihadist Saudi officer who killed three and wounded eight before he was shot and killed.

We tend to assume that our military and security establishment are always on high alert, but too often national security takes a back seat to diversity. One could be forgiven for thinking that the kitchen help at Downton Abbey are more carefully vetted than the people entering sensitive security positions in our politically correct government.

The idea that vetting is somehow discriminatory may help to explain why there hasn’t been much investigation of Antifa — even though it’s been around for two decades in the U.S. and for much longer than that in Europe (where it often launches violent attacks on critics of Islam). Looking too closely into the activities of Antifa and into its sources of funding would be, well, downright “Antifa-phobic.” Sure, Antifa “leans” to the left, as one news outlet recently put it, but everyone knows there are no enemies on the left. On the other hand, if you’re anti-Antifa, you’re probably a conspiracy theorist, and ought to be investigated yourself.

Being pro-Antifa, however, is no problem. Just the other day, Jeremiah Ellison (son of Keith), a Minneapolis City Council member, declared “my support for Antifa.” He added: “I’ll keep focusing on stopping the white power terrorist[s that] are actually attacking us.”

Once again, if you’re an Ellison, you don’t have to hide what you believe. That’s because much of the media share the same beliefs. And if, perchance, there is anything to hide, they’ll hide it for you. I first read about Jeremiah Ellison on the Understanding the Threat (UTT) site in connection with a short video report by UTT president John Guandolo regarding the recent attacks across America. I clicked “Here” to see the video report, but all I was allowed to see was a black screen with the message “this video has been removed for violating YouTube’s terms of service.”

The internet giants have become like the school librarians of yore who decided what books you should and shouldn’t read. Meanwhile, TV news plays a similar role by telling you how to interpret the current disturbances. The screen shows you rows of broken store windows and streets lit up by burning cars, but the news commentator assures you that this only proves that the vast majority of protesters are peaceful.

Because our society is already flush with leftists in media, in politics, in academia, and in the streets, we are closer than most think to one of those tipping points in history where accepted norms are suddenly swept away.

And the left doesn’t stand alone. Islamic cultural jihadists are also interested in encouraging radical social change. It’s not exactly the same change that the left wants, but for the time being the two groups are willing to reinforce each other.

The possibility that we now stand on the brink of revolutionary change is difficult to entertain. In America, we have grown accustomed to long periods of internal peace and prosperity. When disruptions occur, we assume that we will soon return to normalcy. But that’s not always the case in history. “Current trends” are often replaced by new, radically different trends.

It’s said that eternal vigilance is the price of liberty. But it’s difficult to be vigilant in a time of eternal distractions. The fact that many think of a return to normalcy as simply a return to shopping, sports, and mindless entertainments suggests that we are ill-prepared to cope with those single-minded people who have revolution, not normalcy, on their minds.

This article originally appeared in the June 9, 2020 edition of Crisis. It is published here with permission from the Turning Point Project.