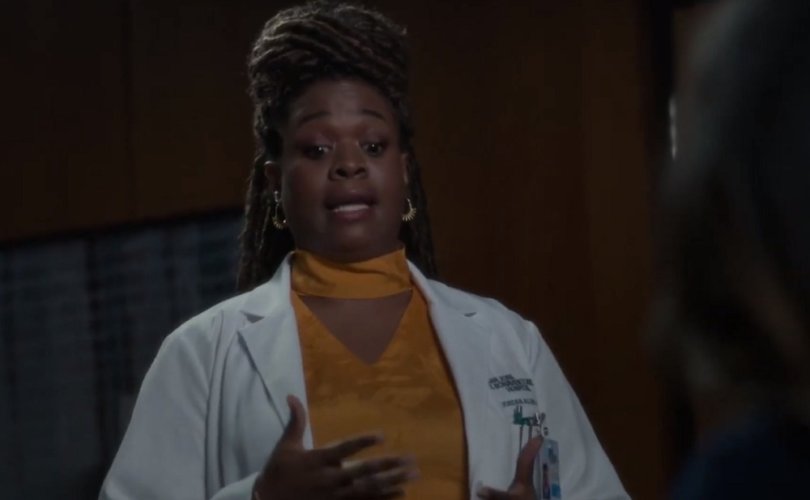 February 6, 2021 (NewsBusters) — A first-year surgical resident faced off with a disapproving Chief of Surgery and other residents over her religious objection to performing an abortion in the winter premiere episode of ABC's The Good Doctor. Instead of standing up for her beliefs, she caved when it became apparent her decision would affect her residency, then admitted she had an abortion she didn't regret and thought her becoming a doctor was proof God forgave her for it.

In the episode airing January 11 titled “Lim”, Dr. Jordan Allen (Bria Samone Henderson) told Dr. Audrey Lim (Christina Chang), the Chief of Surgery, that she didn’t want to perform an elective D&C procedure, explaining, “I'm a Christian. Performing an abortion goes against my beliefs.” Dr. Lim was not happy; she told Jordan that it was her job to make sure the residents learn all of the procedures, including abortions. After another first-year surgical resident volunteered to do the abortion instead, Dr. Lim accepted the offer, then snarked, “That’s the kind of ambition I like to see.”

Later, Jordan decided to go ahead and do the abortion because another doctor convinced her that since she was a first-year resident, she didn’t want to get on the bad side of the Chief of Surgery. After the patient said she was scared during prep, Jordan asked her, “Are you certain you want to go ahead with the abortion?” After receiving affirmation, she said, “Then you don't have to be scared. You're the making the right decision for you.”

During the abortion, though, Jordan was unable to complete the procedure and Dr. Lim, who was supervising Jordan and guiding her through it, had to take over and finish it. Then she mocked her “moral objection.”

Patient: Is anything wrong?

Dr. Lim: You're okay. Dr. Allen, I can take it from here.  Don't worry. We're almost done. You're gonna be just fine… You have no idea what that woman was going through, and you made it worse for her.

Dr. Lim: You had an opportunity to opt out before you walked into that room, but you agreed to do the procedure, you took on an obligation to that patient, and you failed her. If you ever do anything like that again, I will have you removed from my program. Maybe you should be cleaning bedpans for a while. Hopefully there's no moral objection to that.

Later, Jordan went to apologize to Dr. Lim and that is when we find out that Jordan herself had an abortion in her past. She chose her career over the unborn baby and her faith, she told Dr. Lim, but she didn't regret it and thought God forgave her because she's become a doctor.

Jordan: Dr. Lim, my behavior yesterday was inexcusable and unprofessional. I let you down. I let the patient down. I am deeply sorry. And I promise it will not happen again.

Dr. Lim: You let your personal judgment get in the way of doing your job.

Jordan: You're right. That is inexcusable. You said I had no idea what the patient was going through. The truth is I kinda do. Scared, alone, afraid of anyone finding out. I chose my career over motherhood, over my faith. But I don't regret it. And I know God forgave me because I get to be here, living my dream of being a doctor. But I purposely try not to think about it.

Dr. Lim: You're off scut duty.

A pro-choice message pushed by a purportedly Christian character. There is no room for pro-life surgeons, apparently, especially in television medical dramas.