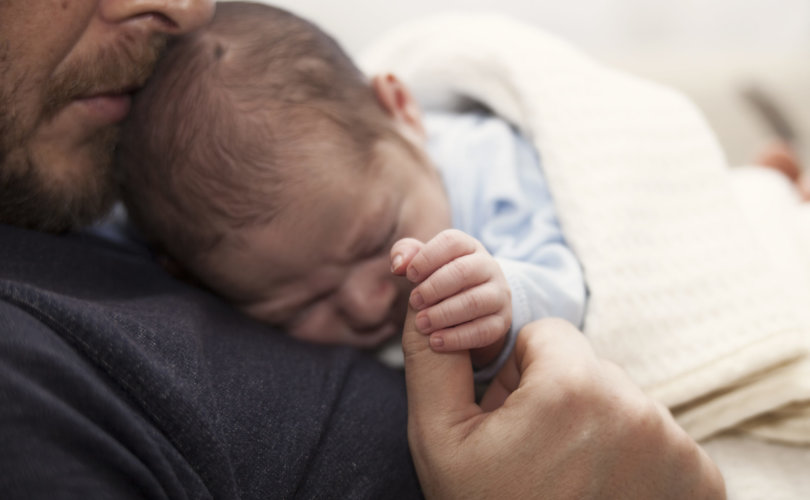 January 24, 2017 (LifeSiteNews) — I stumbled across a challenging quote from renowned abortion survivor Gianna Gessen the other day. Here it is:

“Men, you are made for greatness.  You are made to stand up and be men.  You are made to defend women and children, not stand by, and turn your head, when you know murder is occurring and do nothing about it.  You are not made to use women and leave us alone.  You are made to be kind and great and gracious and strong and stand for something because men, listen to me, I am too tired to do your job.”

Who do I see at pro-life rallies and who constitute a large percentage of the activists in the pro-life movement? Answer: women!

Of course childbirth is a woman's thing. I'm not denying that. However, married men play an instrumental part in producing babies and even that aside, it is the responsibility of every man – regardless single or married – to ensure that women and children are protected and the rights of those who cannot speak for themselves are defended

I believe that one of the greatest tests for any man is whether he is willing to stand up for the lives of the innocent.

The fact that few men today care about this issue is very disturbing to me, yet is not in the least surprising given how this generation of boys is brought up. My parents instilled in me from a young age the ethos of serving and protecting the innocent and vulnerable from a very young age. For that, I am grateful. Sadly, this doesn't happen in many homes today.

The famous German pastor, spy and martyr Dietrich Bonhoeffer once wisely said: “Silence in the face of evil is itself evil: God will not hold us guiltless. Not to speak is to speak. Not to act is to act.”

Wow! What powerful and challenging words.

Bonhoeffer wrote this at a time when millions of innocent Jewish men, women and children were being mercilessly tortured and exterminated under Adolph Hitler's Nazi regime.

He saw the atrocities that were happening in his day and realized that it was his duty to stand up for the rights of the innocent and to advocate on their behalf.  Because if he didn’t, who would? He understood that to keep silent when evil is happening all around you is evil in itself.

Bonhoeffer's words have relevant implications for today's generation of men. Today's issue is no longer that of Jews being wiped out by the Nazi totalitarian state; it's the barbaric practice of abortion – the slaughter of precious unborn human life, which is happening at similar proportions. Many have called it the “modern holocaust” and rightly so.

The silence from guys who know the truth about abortion is absolutely deafening. Their silence does not whisper, it cries out loud and indicts these very individuals who are more concerned about their self-esteem and pride than the rights of unborn human beings.

Do they not have the heart of God that they would let such despicable atrocities continue in society? We live in a generation that prides itself in enlightenment towards social justice issues, but somehow abortion isn't one of them.  This silence, this apathy, this depraved indifference is nothing at all to be proud of. Instead it's a badge of shame and dishonour.

The incredible silence on this issue speaks volumes about 21st century Christendom and the state of our culture in general. We have seen the very image of God – His beautiful and perfect creation – debased to the category of a sub-human species. We have also seen the devastating effect of silence in the face of these evils. We have seen this all too many times in the past when cultures and societies have allowed a lie to redefine the value and worth of a human person.

To think that those who have been redeemed by the blood of Christ and have so much in terms of Bible knowledge yet are silent in an hour that demands intervention and action, is just mind-boggling.

What happened to God's command to intervene and advocate on the behalf of the poor, the vulnerable and the innocent? Unborn babies fit that bill. Why is God's directive to His followers being ignored?

I believe this apathy or depraved indifference has a lot to do with the fact that modern Christianity has created the concept of comfort zones. It's all well and good to feed and clothe the poor because generally you won't receive repercussions for doing so.  But when you touch the abortion issue, you open yourself up to be criticised, attacked, abused, threatened with death and even jailed for daring to speak up and stand up for these innocent lives. You step out of your comfort zone and that's something many men aren't willing to do.

But abortion is too important an issue to be silent on. God's heart is grieved when no one is willing to stand up for His creation – your fellow human beings who are entitled to the same protection and rights as you! Everything you go through in the fight to save human life is totally worth it.

Let me use an example here. Let's say that you're jogging through a park one day and you see a girl being attacked by a sexual predator. As a decent human being, we'd all hope that you would stop and render assistance, right? You would not simply pass on by and act as if you saw nothing happen. You would instead be calling for help and making an effort at intervention. Any decent man would be enraged at the thought of rape, pedophilia, human slavery and child molestation.

The merciless cold-blooded massacre of innocent unborn lives is on that very same level. Tens of thousands of precious little ones are systematically murdered around the globe every single day. Just as you would be enraged at the thought of 6 million Jews being murdered by Hitler or a little child being molested by some pedophile, so should you at the very real slaughter of unborn babies that is happening right now. Their blood cries out from the ground for justice!

Friends, the hour is dark, yet this crucial moment in the history of the world presents the perfect opportunity for you to examine your commitment to God as one of His ambassadors representing His love for all of humanity and resolving to fight everything that He considers as unjust.

The question for is you is “will you stand up?” Will you resolve today to do your bit to put an end to this gross injustice? Will you?

Caleb Stephen is a widely-published Christian freelance journalist, columnist and the founder and Editor-In-Chief of The Caleb Report.