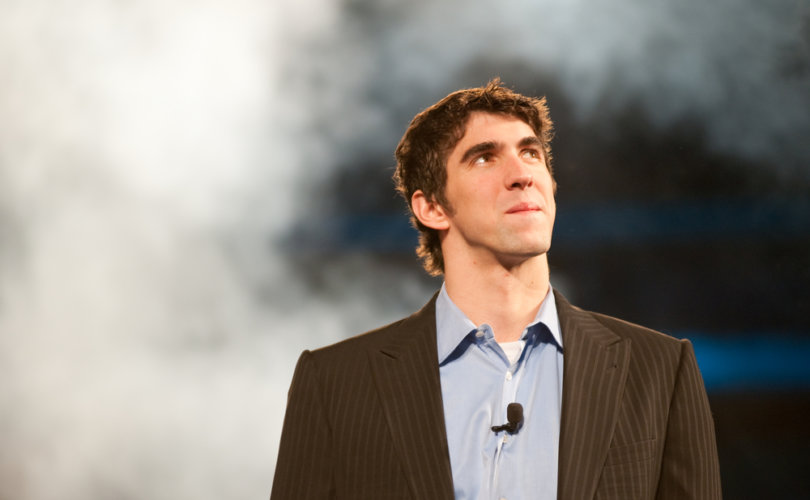 Michael Phelps was on the brink of suicide when someone reached out and helped him find purpose in his life.

August 18, 2016 (BreakPoint) — In the months and even years leading up to this year’s Rio Olympics, much of the news about Michael Phelps was bad. In September of 2014, he was arrested for driving while under the influence in his hometown of Baltimore.

It seemed that Phelps’ best days, both in and out of the pool, were behind him.

But that’s not how it turned out, and I think you can guess why.

As you probably know, Phelps carried the American flag during the opening ceremonies on Friday August 5. Then, as of this writing, he's added five more gold medals to his impressive lifetime total, now numbering 23.

To put it mildly, both of these were unlikely less than two years ago.

As Phelps told ESPN, following his announced retirement in 2012, he struggled to “figure out who he was outside the pool.” In his words, “I was a train wreck. I was like a time bomb, waiting to go off. I had no self-esteem, no self-worth. There were times where I didn’t want to be here. It was not good. I felt lost.”

Like a lot of people struggling with similar feelings, he self-medicated.

In the immediate aftermath of that DWI arrest, he cut himself off from family and other loved ones and “thought the world would just be better off without me … I figured that was the best thing to do — just end my life.”

That’s when a friend came to his rescue: former All Pro linebacker Ray Lewis, whom Phelps considers a kind of “older brother.” Seeing the hopelessness and despair in his young friend, Lewis, an outspoken Christian, told him, “This is when we fight … This is when real character shows up. Don’t shut down. If you shut down we all lose.”

Lewis convinced Phelps to enter rehab and gave him a book to read while he was there: “The Purpose-Driven Life” by my friend Rick Warren.

The book changed Phelps’ life. Within a few days, Phelps called Lewis and told him “‘Man this book is crazy …  The thing that’s going on … oh my gosh … my brain, I can’t thank you . . . enough, man. You saved my life.’”

As Phelps told ESPN, Rick Warren’s book “turned me into believing there is a power greater than myself and there is a purpose for me on this planet.”

The book, which tells readers that “relationships are always worth restoring,” also convinced Phelps to reconcile with his father from whom he had been estranged for more than two decades. Upon seeing each other, they embraced.

As I record this commentary, Phelps still has two more chances to medal, but his story of hope and restoration doesn’t really need any further embellishments—to use one of my favorite words, it’s miraculous enough.

Michael Phelps’ story is a reminder that no matter how big a mess your life may be, and no matter how dim the last embers of hope may glow, God is still there. It’s also a reminder of the role that God’s people are called to play as bringers of hope and agents of restoration.

The results may not be as dramatic as Phelps’ story but they will matter every bit as much.