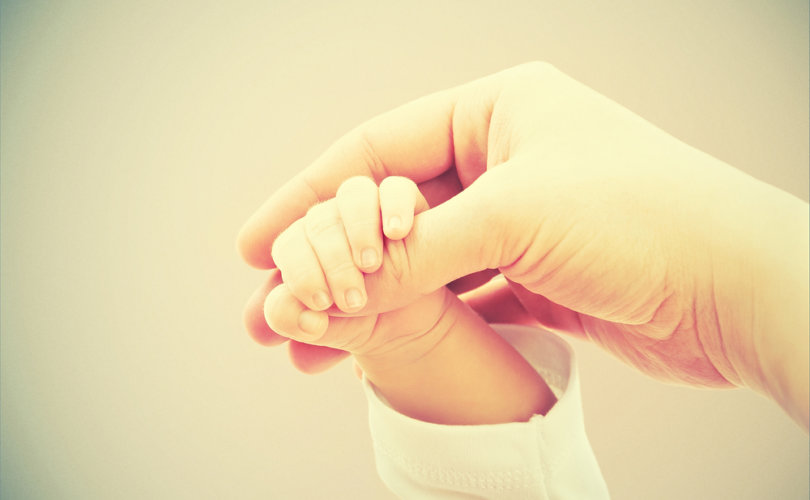 July 5, 2016 (LifeSiteNews) — Abortion is a hotly debated issue, but it is difficult to imagine a more cruel or discriminatory tactic than that now being adopted by campaigners in the latest push for abortion in Ireland.

There has been a concerted effort in this country for the past three years, (an effort backed by powerful and wealthy global abortion campaigners), to target preborn babies with a severe disability, such as anencephaly or Trisomy 13, and to argue that they are less than human because of their condition.

The usual dishonest euphemisms are being used: these babies are described as ‘incompatible with life’ and as a ‘fatal, foetal abnormality’ – terms which have no medical meaning according to doctors – in order to dehumanise them and deprive them of their rights.

It’s the oldest tactic in the world: marking a group of people as less than human has been used for centuries to justify appalling abuses such as slavery or racist hate crimes, or to lock people with disabilities away and deprive them of their rights.

What we see with Mick Wallace’s bill is an especially manipulative move, and an act of naked discrimination against babies who have been diagnosed with a life-limiting condition. He argues that because he deems these babies ‘incompatible with life’, they have no life to protect, despite the fact that they are alive and kicking in the womb.

According to Wallace and his ilk, these vulnerable babies are less than human, and, most importantly of all, they are undeserving of the Constitutional protection granted to every other preborn baby, simply because they have a severe disability. They are happy to ignore the medical evidence that shows that most children diagnosed with a life-limiting condition do live beyond birth, and that some, like Kathleen Rose Harkin (below) have lived for years after a diagnosis of being ‘incompatible with life’.

Yet Wallace’s bill says all these babies – and only these babies – should not be considered an unborn person because of their disability. I cannot imagine a more vicious or vile form of lethal discrimination, and it is shameful that the Irish media have gone out of their way to allow Wallace to dress this cruelty up in a cloak of compassion.

The abortion proposal is unconstitutional according to the Attorney General, but its backers, including Minister of State John Halligan say they don’t care. Ponder that, if you will, a Minister in this government telling the Dáil (Parliament) that he did not care if the bill was unconstitutional.

The truth is that Mick Wallace’s abortion bill seeks to establish a new era of discrimination where babies with severe disabilities can be legally considered as less than human, and not entitled to the full protection of the law.

The proposal reveals the rank hypocrisy of the left who style themselves as champions of the vulnerable, but who push legislation that classes an unborn baby with a disability as undeserving of the same protection as other babies. This is the textbook definition of discrimination.

There hasn’t been a peep from any of the supporters of the bill in the Dáil about perinatal hospice care or about trying to provide support and care for the vast majority of families who continue with their pregnancy despite being repeatedly nudged towards abortion. Neither does it seem to bother them that, in other jurisdictions, up to 90% of babies diagnosed with conditions such as Down Syndrome are aborted before birth. What a tragic loss to the world that is.

I am reminded of what disability rights commentator Tony Barry said previously: “What is the point in having wheelchair access if we don’t have the right to life”. The courageous parents in Every Life Counts, many whom who have lost precious babies to conditions such as anencephaly or Trisomy 13, have said that Wallace’s proposal would push the disability rights back to the Dark Ages.

Of course Wallace and the rest are seeking abortion-on-demand and are simply targeting babies with a disability to try to drive a wedge into Ireland’s pro-life culture. They are ruthless, calculating, and happy to discriminate if that suits their purpose.

This week, writing in the Examiner, Jim Cosgrave wrote that he and his wife were advised that their baby girl had zero chance of living more than a few hours after birth. “Our little girl, Hannah, was beautifully born, and lived for seven powerfully life-filled months. She radiated total love, incessant emotionality, and had a consummately winning personality to melt all hearts,” he wrote.

“The impact she had on a worldwide circle of friends and family was astounding, empowering, and life- affirming. We would not have missed it for the world; and are still relentlessly inspired by her doughty spirit and determined radiance in adversity.”

Mr Cosgrave said that Hannah’s life: “gives lie to the term ‘fatal foetal abnormality’, which is being brashly bandied about as a given ‘truth’ to suit a fallacious perspective.”

He also cautioned: “No one can be sure how long a child with a condition that will limit their life will survive. But whether it is minutes, hours, days, or months, their short lives have infinite value. To deny them their brief time is a travesty, and to allow their sad circumstances to be used as a wedge to force open the door to abortion on demand so that perfectly healthy babies can be denied their right to life would be tragic.”

Abortion is never the answer. We should instead be seeking solutions which care and support both these sick babies and their families, so that they can spend precious time together, and have a pathway to healing. Mick Wallace’s bill does nothing but advocate discrimination and despair. In fact, it is his proposal, and not these vulnerable babies, that is incompatible with life, and incompatible with love.