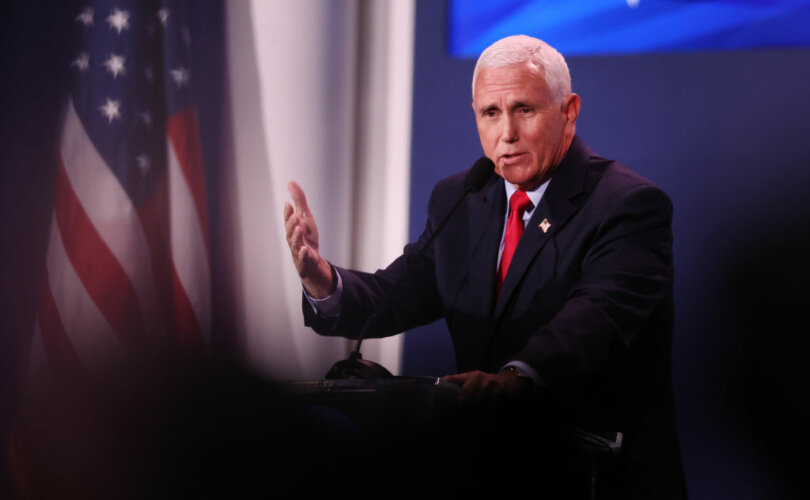 Pence, a potential 2024 presidential candidate, made the statement on “Face the Nation” Sunday night. Margaret Brennan asked Pence if pro-life laws could include “restrictions on IVF treatment” and mentioned that Pence and his wife Karen had undergone IVF.

The former VP said he and his wife had used IVF “many times.” The couple reportedly first tried a form of assisted reproductive technology called Gamete Intra-Fallopian Transfer, which is not explicitly condemned by the Catholic Church. The Pences were married in the Catholic Church, but both now attend a Protestant church.

“I fully support fertility treatments and I think they deserve the protection of the law,” Pence said. “They gave us great comfort in those long and challenging years that we struggled with infertility in our marriage, and I do believe that as we work our way forward, we can protect the unborn, we can come along women in crisis pregnancies, and we can support the newborn with equal vigor.”

When Mike Pence says he “fully supports” IVF, what does that mean? Taxpayer-funded? Law establishing a “right” to IVF? pic.twitter.com/ssASmNQoF1

However, the pro-life movement should be concerned about IVF and Pence’s support for it.

IVF involves removing sex from pregnancy by mixing the sperm and egg in a lab. Then some embryos are implanted, while others are frozen. These are typically destroyed or left to languish for years. The immediate or pending destruction of human life cannot be supported by the pro-life movement.

Furthermore, IVF has been used by homosexual couples to create children, detached from their mother or father. This is how Dave Rubin and his “husband” created two children, despite neither having eggs nor a womb.

Pence, a Christian, should be concerned about this issue. And his statement on his full support needs also to be further explored.

Does someone have a “right” to fertility treatments? Will Pence use the bully pulpit, if he makes it back into the White House, to advocate for fertility treatments, placing himself on the side of Planned Parenthood and the LGBT movement and against pro-lifers?

Will Pence lobby the Republican National Committee to include a platform plank that fully endorses IVF?

These are all questions that deserve an answer.

Pence is a measured, thoughtful person – making statements about the need to legally protect the destruction of human life and the separation of sex from pregnancy should not simply be written off as an off-the-cuff statement during an interview.

He should explain what specifically he means by his full support for fertility treatments and how he squares that with his support for the sanctity of human life, because the two are not compatible.