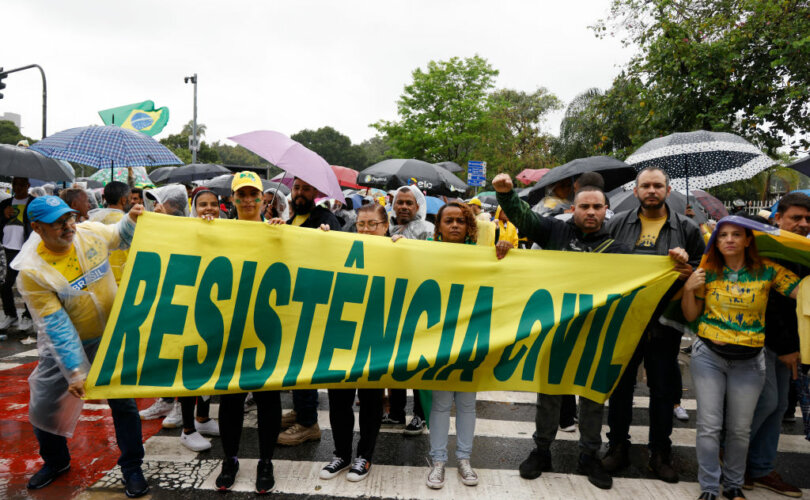 Supporters of President Jair Bolsonaro hold a banner that reads in Portuguese 'Civil Resistance' during a demonstration in front of the Eastern Military Command against election results on November 2, 2022, in Rio de Janeiro, BrazilPhoto by Wagner Meier/Getty Images

Brazil’s Superior Electoral Court announced November 29 that the certification ceremony of Da Silva, a member of the Workers Party, will take place at 2 p.m. on December 12. The inauguration is scheduled for January 1.

The following day, however, Bolsonaro filed a petition with Brazil election authorities formally contesting the results, alleging some voting machines malfunctioned and that any votes cast through them should be annulled.

A former vice president of the Regional Electoral Court, Sebastião Coelho, in a November 20 speech called for the arrest of Supreme Court Chief Justice Alexandre de Moraes for pressing forward with certifying the election.

“More than 80 percent of judges in Brazil, at first and second instances, do not agree with what the Federal Supreme Court is doing,” Coelho said.

“This is the largest democratic protest in possibly human history, and the global media is crickets on this,” he said in an interview with Tucker Carlson on Fox News.

What’s clear, he said, is that the Brazilian people “don’t want to be led by a convicted criminal.”

Long before Bolsonaro became president, Da Silva was convicted in three separate courts of 12 charges in a unanimous vote of 19 judges, he noted.

Da Silva’s judicial appointees in the Supreme Court, Tyrmand said, annulled and vacated Da Silva’s multiple sentences and freed him so he could run in the presidential election. That’s despite a Brazilian law that prohibits a convicted felon from running for office.

The judges, he said, put Da Silva “on the chessboard so they could attempt to control the outcome” of the election.

Even people in the districts where the socialist Da Silva supposedly has strongholds, such as the Amazon, the people there are marching.

“Every city in the country is filled with protesters,” Tyrman said. “And now the question is what is to be done when you have a judiciary that is not comprised of judges in the classical sense – impartial, nonpartisan judges – but political appointees and partisans who are working to skew an election outcome?”

Tyrman noted the military has a special role in the Brazilian constitution, giving it authority to adjudicate separation of powers disputes.

“It looks like this will be coming to a head,” he said.

The only global reach media outlet that has covered protests in 🇧🇷: @TuckerCarlson at @FoxNews. And it is recognized by the patriots of 🇧🇷 pic.twitter.com/CjTgfnLELy

Steve Hanke, professor of Applied Economics at Johns Hopkins University and a senior fellow at the Independent Institute, posted video of protesters surrounding army barracks in an apparent appeal for military intervention.

Why won’t MSM show this to you? They don’t want you to know you have power.
Rise Canadians Rise 🍁 pic.twitter.com/vCeeqqJXLv

Katie Daviscourt, a reporter for Rebel News, tweeted that the “biggest question about the protests in Brazil is where are President-elect Lula’s supporters?”

“Leftists are known for counter protesting, but there hasn’t been one video supporting Lula,” she wrote.

Millions, meanwhile, remain in the streets in support of Bolsonaro:

The biggest question about the protests in Brazil is where are President-elect Lula’s supporters? Leftists are known for counter protesting but there hasn’t been one video supporting Lula.

However, millions remain in the streets in support of Bolsonaro. pic.twitter.com/44Ac8BKARY

Hanke also posted a video showing ballots with Bolsonaro’s name in the trash:

Protests over the outcome of Brazil’s recent presidential election continue unabated. Protesters are ENRAGED. What has them exercised?  Ballots with defeated Jair Bolsonaro’s name on them were found in the trash. Take a look:pic.twitter.com/pFsl3S2t2o

Another video questioning the strength of da Silva’s support:

Lula’s supporters EXIST ONLY VIRTUALLY
It is a mystery why Brazilians have never seen Lula’s supposed 50 millions of supporters, who appear only inside voting machines but never on the streets. Are they even real? pic.twitter.com/tI0cqmYmGy

11.30.22 Brazil .. for the thirty-first consecutive day, the Brazilian people are on the streets asking the Armed Forces for help. Protesters demand the ineligibility of candidate Lula, justice in elections and respect for the constitution. Rio de Janeiro RJ Brazil pic.twitter.com/Swz2SroOku