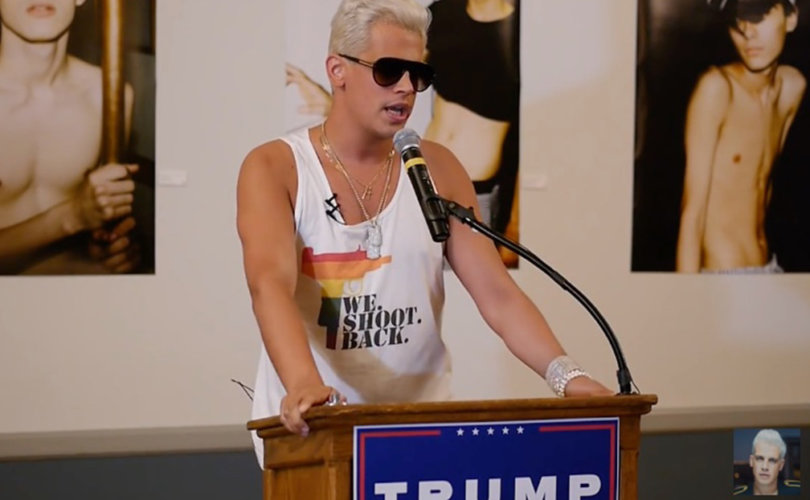 February 20, 2017 (Illinois Family Institute) — The obscene, sodomy-celebrating, and nasty provocateur; rising GOP star; and Breitbart contributor, Milo Yiannopoulos, was recently invited to be the keynote speaker at the Conservative Political Action Conference (CPAC). Fortunately, his invitation was quickly rescinded when an interview with Joe Rogan from ten months ago came to light in which Yiannopoulos gleefully recounted performing a sex act on a Catholic priest when Yiannopoulos was 14-years-old–a sexual act that Yiannopoulos insisted did not constitute pedophilia.

The CPAC invitation and dis-invitation to Yiannopoulos are signs of how corrupt and feckless the conservative movement is becoming. The fact that conservatives would invite Yiannopoulos in the first place is repugnant. His repeated perverse and scatological comments should have rendered him an unsuitable speaker no matter what conservative positions he espouses on issues. It’s dispiriting to know that it took his glib defense of sex between adults and adolescents to compel feckless CPAC leaders to rescind his invitation. This provides yet more evidence that appeasement of homosexuals and acceptance of Leftist positions on homosexuality will only corrupt conservatism.

Two days before he was forced to disinvite Yiannopoulos, Matt Schlapp, president of the American Conservative Union which sponsors CPAC, tried to defend the invitation tweeting, “We think free speech includes hearing Milo’s important perspective.” Seriously? Is Yiannopoulos’ perspective on policy issues so very unique? Surely there are some conservatives who can offer compelling defenses of religious liberty, the rights of the unborn, capitalism, a strong national defense, and free speech without hearty endorsements of homoeroticism and promiscuity.

Yiannopoulos is trying to clean up the mess he created (including losing a book contract) when he said that he doesn’t view his sexual encounter with an adult man as an incidence of pedophilia. He claims that he views molestation as a particularly heinous crime:

“I am a gay man, and a child abuse victim. I would like to restate my utter disgust at adults who sexually abuse minors. I am horrified by pedophilia and I have devoted large portions of my career as a journalist to exposing child abusers.”

If his claim that he has exposed child abusers is true, kudos to him. But then why did he say this in his interview with Joe Rogan:

I lived in Hollywood a while ago. I went to… [parties of] people who I won’t name, of a similar stature [to Bryan Singer] in Hollywood. I went to their boat parties and their house parties….some of the things I have seen beggars belief….I don’t want to be indiscreet about specific people because I think it’s going to be dangerous. But I can tell you the truth without dropping anyone in it: Some of the boys there were very young, very young….There was a lot of drugs and a lot of twinks taking drugs and having unsafe sex with older men and some of these boys were very young.

Perhaps some intrepid journalist can ask Yiannopoulos if he reported this child sexual abuse to authorities.

This current Yiannopoulos dust-up confirms what I wrote months ago following his appearance at a  “Gays for Trump” event during which he spoke in front of photographs of hairless, shirtless, skinny young men who look like minors and repeatedly made sexually suggestive comments to off-camera men:

Those within the GOP who understandably seek a bigger tent should stop fawning over the indecent Yiannopoulos simply because he holds some conservative positions and attacks liberals and liberalism. A person who delights in sodomy cannot possibly strengthen a party committed to conservatism. Republicans need to stop being so desperate for the cool kids to like them. The enemy of our enemy is sometimes our enemy.

Exulting in promiscuous homosex is not a sign of conservatism. While Yiannopoulos may expand the Republican tent, he cannot and will not strengthen the Republican Party. He will corrupt it from within like a cancer.

The problem is that a country that no longer recognizes that children need and deserve mothers and fathers; that marriage has a nature central to which is sexual differentiation; and that sexual boundaries matter (including a social taboo against homoeroticism) is a society that cannot and will not long endure. We are a decaying culture, and the left sees our social decay as social justice and progress.

Do I agree with any cultural or political opinions of Yiannopoulos? Yes.

Are his conservative positions exculpatory with regard to the obscene and vicious comments he makes or his giddy endorsement of sodomy? Absolutely not.

Are his conservative sentiments sufficient to justify his invitation to speak at conservative events? Absolutely not.

This article was originally published by the Illinois Family Institute and is republished with permission.

The curious mind of Milo Yiannopoulos