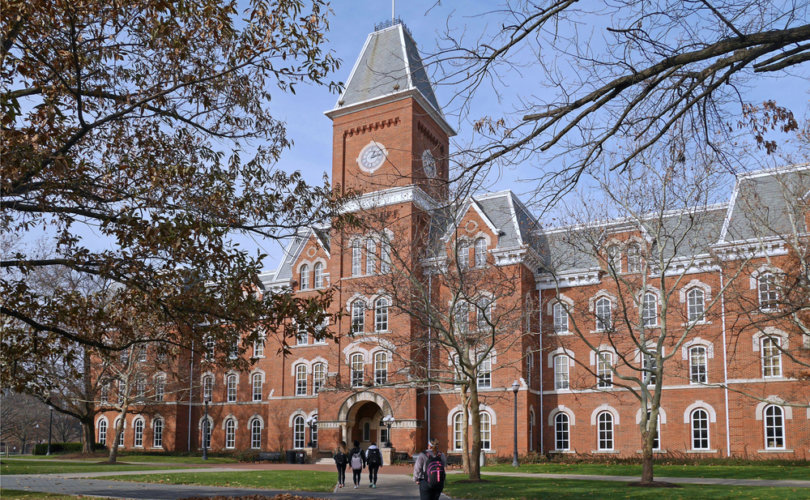 November 7, 2018 (FRC Action) – Nicolas Meriwether teaches philosophy, but he might lose his job over grammar! Turns out, calling a male student “sir” puts you on the wrong side of America's brave new battle over pronouns.

Like a lot of educators, Meriwether assumed that biology was pretty self-explanatory. Just because a guy wants to be called a girl doesn't mean he is one. His employers at Shawnee State University in Ohio beg to differ. When Nicolas refused to call a male student “ma'am” or “she,” he was hauled into his bosses' office and slapped with a personnel violation. According to administrators, acknowledging someone's biological sex with the right pronoun “creates a hostile environment.”

The student, who unleashed a string of profanity on Meriwether after class, filed a formal complaint with the school, because his professor wouldn't play along with his manufactured reality. More than a year and a half later, after the school threatened “further corrective actions,” Nicolas is taking them to court.

Amazingly, his attorneys at Alliance Defending Freedom (ADF) point out, “University provost Jeffrey Bauer 'openly laughed' at Meriwether's claim that his religion precluded him from using the student's preferred pronouns during a meeting held after the professor filed a complaint with his union.” As if that weren't outrageous enough, the chairman of his humanities department suggested that Christians be banned from teaching certain courses.

ADF's Travis Barham has a message for the school: “Tolerance is a two-way street.” Universities, he points out, “are meant to be a marketplace of ideas, not an assembly line for one type of thought. But apparently, Shawnee State has ignored that foundational truth.” Proving that Shawnee officials were out to push an agenda, Barham pointed out that the university “refused to consider any solutions that would respect the freedoms of everyone involved. It instead chose to impose its own orthodoxy on Dr. Meriwether under threat of further punishment if he doesn't relinquish his rights protected by the First Amendment.”

One wrong pronoun, and your career's at risk! Truly, it's mind-boggling that this is where the other side has led us as a nation. And we already know where we're headed next now that Democrats have taken control of the House – punishments for anyone who refuses to play along with this moral confusion.

Drew Hammill, a spokesman for Rep. Nancy Pelosi (D-Calif.), has already said that the Equality Act – which would nationalize punishments like Shawnee State University's – will be a “top priority.” “In the House,” he explained, “the majority will signal a piece of legislation is a top priority by assigning it a bill number between 1 and 10. Leader Pelosi has decided the Equality Act will get one of these priority bill numbers, indicating its importance to House Democrats.”

To see just how much is at stake, click over to FRC's Q&A.