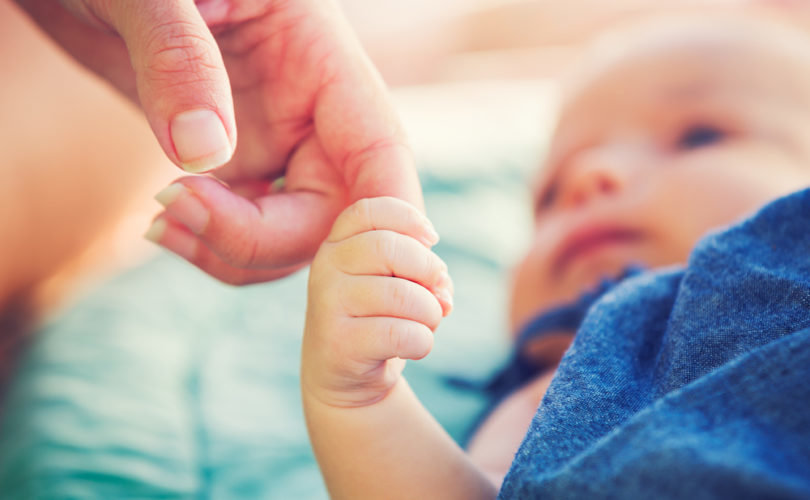 'As I laid my son down to sleep tonight, I started to cry. Despite every trouble, I have my son in my life and no problem seems too big with him. He is God’s miracle.' (Stock photo)Shutterstock.com

Jan. 8, 2016 (Abortion Pill Reversal) — This is my story about how I was given a light, a way, and a chance that saved my son’s life. When I found out I was pregnant, I was fearful and uncertain. My friends asked, “Are you going to keep it?” Obviously, I had a choice.

I had eight months to go before I graduated nursing school. I was in a relationship that was going south by the minute. I had no car and little income. I was not ready to have a baby. All I needed to do was take a pill and the rest would be history.

No one had to know and life could go on as I intended. This was a very persuasive argument. It seemed like the right decision, until I took the abortion pill.

After I took the abortion pill, it was crystal clear to me that I made a huge mistake.

I popped out of bed, went downstairs, and began to search on Google. I clicked on “abortion reversal.” I called the hotline provided on the website and asked, “Is it true that the abortion pill can be reversed?” The hotline nurse answered, “Yes.”

RELATED: The day I performed the first-ever RU-486 abortion reversal

She then gave me a number for a doctor and told me to call him. The doctor told me to meet him at the hospital promptly. It was about 11:00 p.m. when I got to the hospital, to meet with the mysterious miracle doctor.

Everything was uncertain and surreal, but this doctor quieted those feelings. He was different from any other doctor I had met. First of all, he was expected to fly out the following morning to a convention. He dropped what he was doing to meet me.

Next, the medical goal was to flood my system with natural progesterone to overpower the abortion pill. This was followed by a course of progesterone for the rest of my pregnancy. I wondered if this would work, or was it already too late? After I went home, no bleeding or cramping occurred.

The following Saturday, the doctor returned from his trip. My mom accompanied me to see if the reversal worked. We met the doctor for an ultrasound. The baby had a strong heartbeat that resonated throughout the room. Wow! It worked!

I was now worried about how much damage I had possibly done to this baby with the abortion pill. When I voiced these fears to the doctor, he never once succumbed to the negative “what ifs.” Instead, he always directed the attention to the miracle baby growing inside me. Despite any damage that could have been done to the baby, it could also have been overcome. God, was that powerful.

Every ultrasound, consultation and blood draw came out perfectly. My son grew and grew strongly. He was delivered at 8 lbs, 1 ounce, with an APGAR score of 8 and 9 (good!). He was gorgeous. He takes my breath away every day. At his 2-month visit, his pediatric doctor told us that he looks great, and for us to be aware he will probably be advanced with crawling and walking.

I completed nursing school, passing exams before and after the delivery. My boyfriend is on his way to becoming a good husband.

As I laid my son down to sleep tonight, I started to cry. Despite every trouble, I have my son in my life and no problem seems too big with him. He is God’s miracle. I just want to hold my miracle son and pass our story on to the countless people who are just like us – those who need an answer and a glimpse of God’s real plan.