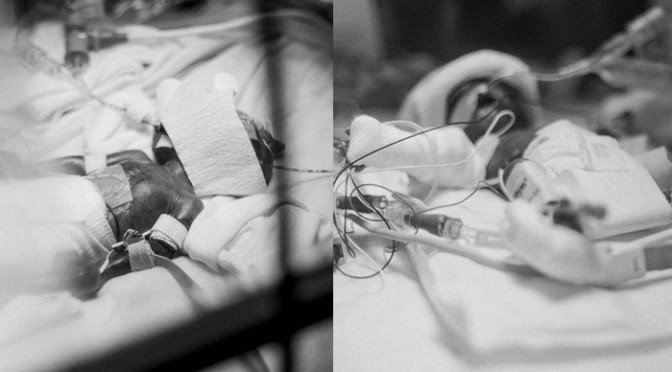 October 15, 2015 (LiveActionNews) — On September 29th, I went to a hospital in LA to see a specialist for some gastrointestinal issues I’ve been facing for 14 months. Since I was pregnant, they gave me a room right away and wanted to monitor Luca and Kaden.

They did an ultrasound and instantly found some stuff they were alarmed about, because the fluid was very off between the membranes separating them. They didn’t tell me much about it at this time because they didn’t want to worry me, so as I stayed there a night, and the following night they had a specialist run an anatomy scan to see what was going on.

The doctor found that I was facing twin-to-twin transfusion syndrome, which happens when two babies share a placenta. One baby gets more blood flow, fluid, and nutrients than the other, making the other baby ill and setting up for massive risks. They set me up with a specialist that was going to do a surgery to help save the babies, and help me have a healthier rest of my pregnancy.

On October 1st, I had an MRI for my gastrointestinal problems (one that is safe during pregnancy) and started feeling contractions while it was being performed. I didn’t really know it was contractions, since I am a first time mom, so I let it go on longer and didn’t really pay much attention. At about 10 p.m. that night, I was getting an ultrasound and they [the contractions] got significantly worse and painful — and very consistent — so I requested to be monitored. They monitored the contractions and saw that I was definitely in labor, so they gave me medications to try to stop the labor from going any further.

At about 4 a.m., they checked my cervix. I was already dilated to three and my water was bulging, so they set me up for emergency labor. Within no more than a hour, I went from a three to a ten, and it was time to push. I was given horrible statistics. I was told I was just miscarrying and that the boys would be dead as soon as they came out; or that if they came out, they wouldn’t live more than 30 seconds to one minute. My brave warriors proved those statistics wrong.

First baby comes out, and I hear a soft cry and was instantly so relieved that he was alive. Push more, but one is severely breech so they flip him and he’s out, breathing. Two beautiful, fierce, gorgeous babies with beating hearts, and they just put them on a table with no help or oxygen.

“Do you want to do skin to skin until they pass?” a nurse said to me. I instantly freaked out and started saying, “GO TEND TO MY BABIES GO TEND TO MY BABIES! THEY HAVE HEART BEATS! GO SAVE THEM!” My mom and husband also yelled to them. This nurse battled me for what seemed like three hours, saying, “They’ll be brain dead; they’ll be vegetables — I don’t think you understand what I am saying to you.” She truly fought me for minutes, and would not take my request for an answer. I responded to her and said, “I don’t care if they have a 1% chance of living and will be vegetables for the rest of their lives. Those are my babies and my sons, and I will do anything to fight for them and save them.”

These little babies don’t have voices, and as their mommy and daddy, we weren’t going to sit back and do nothing, because they are humans. They are lives; they had beautiful beating hearts, toes and fingernails, brains, beautiful faces and noses; they were in every form absolutely perfect and stunning and without blemish. They are my sons, Kaden and Luca, and we fought for them as they fought for their own lives. After 30 hours of the bravest fight, our sweet and beautiful Luca Sailor went to heaven to be with His maker. The excruciating pain that comes with that is indescribable in every form.

On October 4th, the head of the NICU came in to warn my husband and I that our second son, Kaden, was in dire need and wasn’t doing well. They told us about how under developed his skin was and that it was just splitting, and that he was going to develop an infection and that it could eventually not hold his organs any longer. He told us we needed to take him off of his support so that he could die with “dignity.” We said that we wouldn’t risk basically killing him, when there’s still hope.

God is still good and sovereign, and He can make all things happen, so we decided to keep fighting for him regardless of statistics and what was being said to us. After that decision was set in stone, I had the honor of sitting with my son for about 40 minutes, just talking to him and singing to him. Every time I sang, he put his arms up and kicked his little feet. At 2:00 a.m. the following early morning, our beautiful Kaden Cash also went to be with his Maker and his beautiful brother.

All I can think of is that if we didn’t fight for their lives, we never would’ve gotten to have those 30 hours and few days with our amazing, gorgeous, brave warriors. We wouldn’t have gotten to sing with them, love on them, and be there with them if we would’ve just listened to statistics. They also would’ve never been able to tell their story. Though it be short-lived, our baby boys’ lives ministered to and reached nations. Infants — babies who aren’t given voices were given the strongest and loudest voices that were able to reach nations — something I prayed for every day during my pregnancy.

These lives matter fiercely, and even though they were only here for such a short time, they were and are world changers that will forever live on.

Luca means “Giver and bringer of light,” and Kaden means “Fighter,” which initially we thought meant he would fight for his life — but that’s not the case. It meant that they got to fight for all of the unheard voices, for all of the children and people that never got to speak up. They fought for the right of children in the whole world, while also bringing light into such a dark world.

Those are my precious warriors.