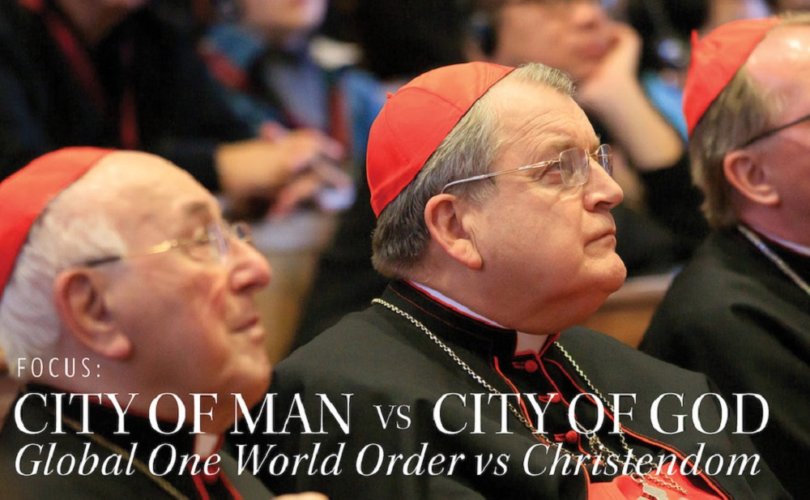 June 17, 2019 (LifeSiteNews) — Many LifeSite readers will, no doubt, have followed the Rome Life Forum, held at the Angelicum, May 16–17, via the livestream and reports from the conference. From today, the summer issue of Calx Mariae (Heel of Mary), Voice of the Family’s quarterly magazine, which reproduces a selection of talks from the Forum, is also available. You can click here to see the preview of the contents page and here to order a copy or to subscribe.

The theme of the Forum this year was “City of man vs City of God — Global One World Order vs Christendom.” Pope Leo XIII summarised the eternal confrontation between the two cities in his encyclical Humanum genus (1884) as follows:

The race of man, after its miserable fall from God, the Creator and the Giver of heavenly gifts, ‘through the envy of the devil’, separated into two diverse and opposite parts, of which the one steadfastly contends for truth and virtue, the other for those things which are contrary to virtue and to truth. The one is the kingdom of God on earth, namely, the true Church of Jesus Christ; and those who desire from their heart to be united with it, so as to gain salvation, must of necessity serve God and His only-begotten Son with their whole mind and with an entire will. The other is the kingdom of Satan, in whose possession and control are all whosoever follow the fatal example of their leader and of our first parents, those who refuse to obey the divine and eternal law, and who have many aims of their own in contempt of God, and many aims also against God. This twofold kingdom St Augustine keenly discerned and described after the manner of two cities, contrary in their laws because striving for contrary objects; and with a subtle brevity he expressed the efficient cause of each in these words: ‘Two loves formed two cities: the love of self, reaching even to contempt of God, an earthly city; and the love of God, reaching to contempt of self, a heavenly one.’ At every period of time, each has been in conflict with the other, with a variety and multiplicity of weapons and of warfare, although not always with equal ardour and assault.

Being the children of our time, it may be difficult for us to judge the intensity of the battle between the two cities at this period of history. However, we must consider an important feature of this perennial warfare: the widespread idea today that there is no real conflict. Some may also suggest that it is “un-Christian” to act as if there is a conflict; that such warfare belongs to the past, while in our era a harmonious coexistence of the city of man and the City of God has been established and that the notions of sin and sacrifice have been reformed to this end.

Such denial of the eternal conflict between the City of God and the city of man has the most serious consequences because it is the denial of the irreconcilable difference between truth and falsehood, self-sacrifice and self-love, our eternal destiny in Heaven or in Hell. It forces retreat upon the Church Militant while the enemy vigorously advances his attacks on the greatest gifts that humanity has received from God: life, family, Church.

Today, the global new world order seeks to enthrone man, preach human rights, and reform the Church’s teaching according to man’s passions and desires. As Prof. Roberto de Mattei highlighted at the Forum, such “order” is in fact disorder, another manifestation of the ancient fall of man. Christian people of all ages have sought deliverance from it through the merits of Jesus Christ, forming a new community of the redeemed, that City that gives glory to God in all things.

Our advocacy in defence of life and the family is a real opportunity to rebuild Christian civilisation by perseverance in witness to the intrinsically related sanctity of human life hidden in the womb and the Divine Life hidden in the tabernacle.

Each year, a growing number of pro-life and pro-family leaders meet in Rome because Rome is the chair of the truth — not philosophy, theology, or science, but truth. It is important, therefore, to proclaim the truth before her throne. We were honoured this year by the presence of three cardinals, Walter Cardinal Brandmüller, Raymond Leo Cardinal Burke, and Willem Jacobus Cardinal Eijk. Janis Cardinal Pujats of Latvia and Bishop Athanasius Schneider also joined us via video.

In such testing times, it is a true blessing to spend a few days with our extended Catholic family. It helps us greatly to renew our commitment to the rebuilding of Christendom, while we make our pilgrimage to the “new Jerusalem, coming down out of heaven from God, prepared as a bride adorned for her husband.” (Rev. 21:2) Let us draw courage and fortitude from considering the beauty of the Heavenly City to undertake our service with ever greater love. Truly, “eye hath not seen, nor ear heard: neither hath it entered into the heart of man, what things God hath prepared for them that love him” (1 Cor. 2:9).

Please click here for a preview of the contents page of the latest edition of Calx Mariae and here to order a copy or to subscribe. If you enjoy the reports on LifeSite or in Calx Mariae, then why not join us at the next Rome Life Forum, May 21–22, followed by the March for Life on May 23, 2020?